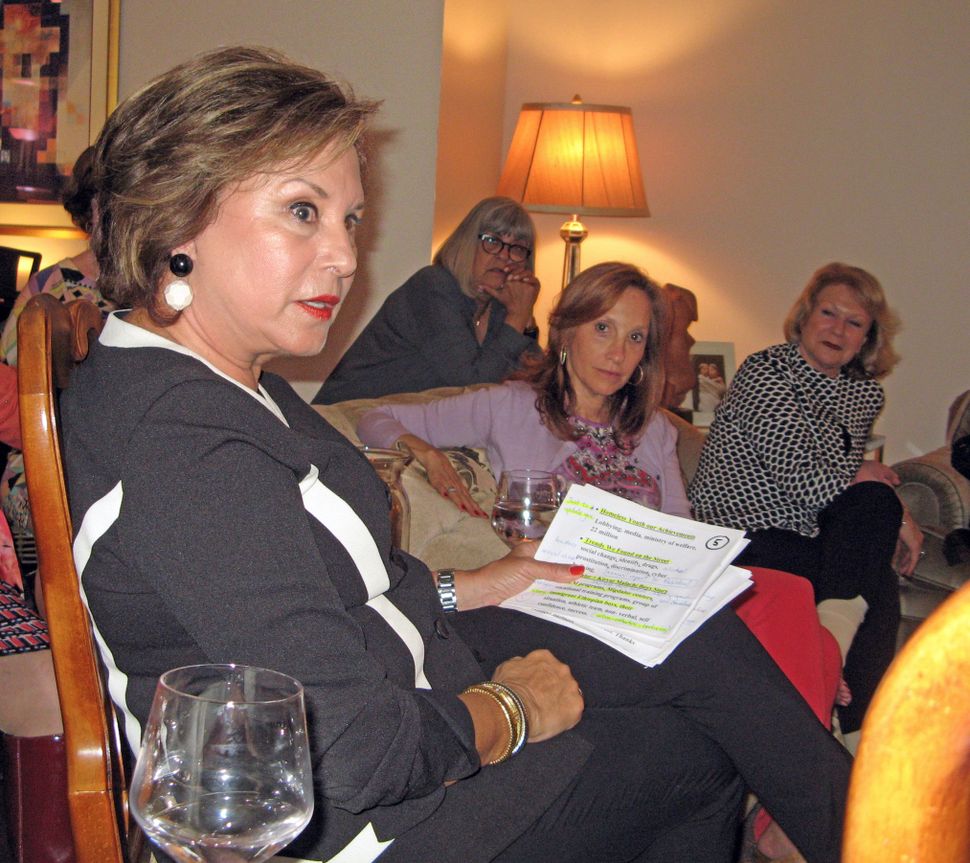 “I joined ELEM/Youth in Distress twenty years ago” its president Nava Barak—Israel’s former First Lady—told an intimate gathering at the East Side home of Judy Fein following her appearance at the ELEM Gala. “Twenty years ago I met a group of young people at an ELEM hostel [in Israel] who told me their stories of abuse at home, sexual abuse, boys and girls, runaways…I went home, watched my sleeping daughter who was safe in bed and decided to join.”

In a measured and calm pace she rattled off statistics: “800,000 youths age 12-18 in Israel and 25% of them are living in different stages of risk…we don’t wait for the youths to come to us. We seek them out…in the street, parks, schools, beaches even on the internet,” Barak informed: “ELEM was founded in 1983 by a group of American and Israeli volunteers [and has grown] with social workers, psychologists trying to integrate this youth into society—the army, jobs, to contribute to society…. There’s waves of immigration, absorption, homelessness, drug abuse—even prostitution—our response is very innovative—and unique.”

“We don’t wait for the youth to come to us,” said Barak. “ We have a special website where they can get counseling, day or night we are there for hours—we accept everybody, we are not judgmental…. We have eighty projects in forty places around Israel from North to Elate…fifteen vans operating…. we wander around streets looking of the ‘hot spot’…we sit, have conversations…. We let the kids know the vans will be there…It’s like a [mobile] emergency room out on the street. Sometimes they don’t have a home…we give them showers, beds, acceptance, hot drinks, snacks. They are hungry, need clothes.”

Barak recalled celebrating a birthday for a boy who had never had a birthday party. “ The volunteer and staff were his family….”In Jerusalem I met a girl and a boy—Nomi and Shifi —who were homeless, lived in an abandoned building. Nomi was from a Haredi family, she broke some rules ran away from home. She and her boyfriend started a relationship on the street…. met at the Center, wanted to get married. “Both Jewish?” someone asked. “Yes!” said Barak “both Israeli. We also have Arabs, Bedouins, Druze, Christians. So the Center organized a wedding, people donated a chupah, a wedding dress, a car with flowers. This past Passover we had a [seder] at the Center. I saw Shifi and Nomi with a 2-year old girl. They have an apartment. He has work…the social worker who helped them cut the umbilical cord.”

“We work with Ethiopians in their communities…. huge generational and cultural gap. Big difference between the immigrants and the next generations…. They are ashamed of their parents but we also want the kids to be proud of their origins…. We now have 270 social workers and psychologists…1600 volunteers. We have hired Ultra Orthodox professional workers….”

Ann Bialkin, past president ELEM America piped up: “This is not unique to Israel…25% of the youth [at risk] is the same statistic as in other countries. They all have the same problems.” Also present: ELEM U.S. President Lenore Ruben, ELEM Executive Director Rabbi Eric Lankin.

During our post presentation chat over a nosh-laden table, I recalled a November 11, 2001 Nava Barak encounter at a gala when she was in New York with her husband, then Israel Prime Minister Ehud Barak. Standing by his side as he recalled “posing as woman with everything in place, including wig and lipstick” when he led a team against the terror leaders who murdered the Israeli athletes in Munich at the 1972 Olympics….”When I returned from the raid, I slipped into bed still wearing clothing and makeup— when Nava woke up—was she surprised!’”