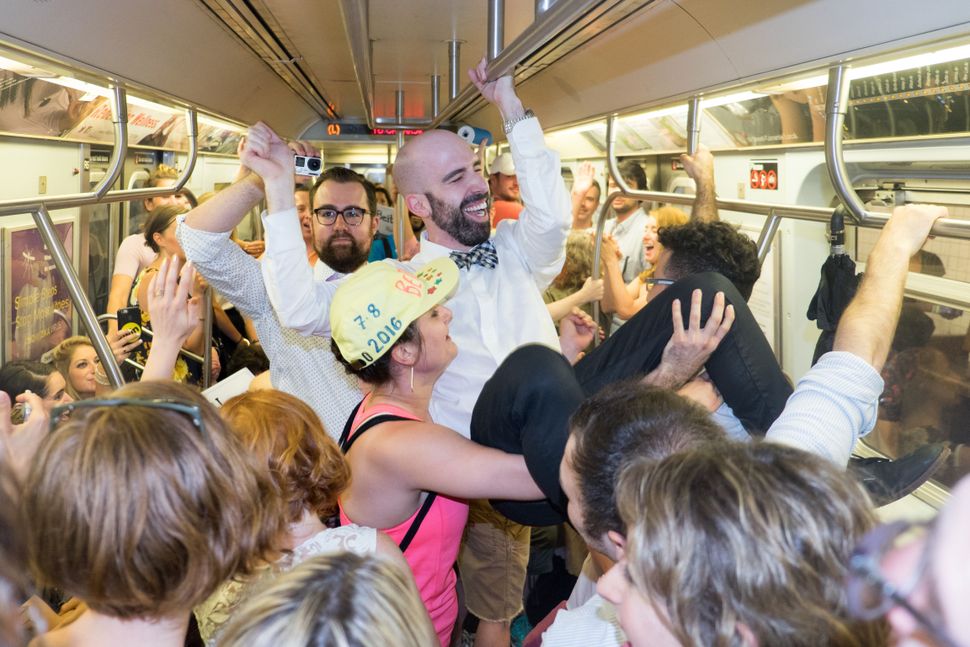 The groom does the hora on the subway. Image by Andrew Bisdale 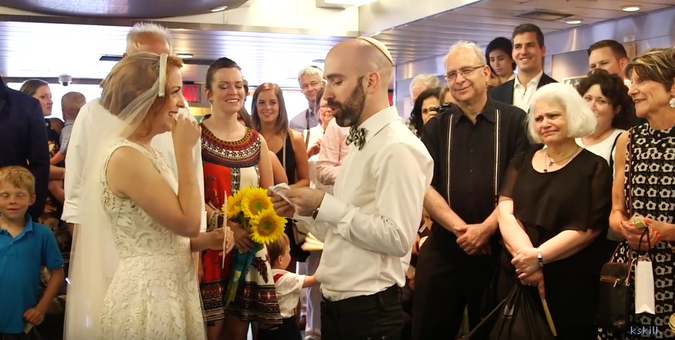 A bride, a groom and their officiator all walk onto a boat…

Nope, that’s not a joke (though it probably would have had a pretty great punch line). On July 8, Keith Haskel and Bethany Hall got married aboard the Staten Island Ferry, in a jovial, crowd-filled ceremony rife with nautical puns.

“I’m going to throw a line out there,” the bride said during her speech, beaming. “Now you’re hooked.”

There were no bridesmaids or groomsmen alongside the couple and in a phone interview with the Forward, Hall joked that the Statue of Liberty filled in as her maid-of-honor.

“We’re both just two fun-loving people.” her husband said. “We didn’t know how to have a traditional wedding.”

Hall added that coming from different religions — the groom is Jewish, the bride Presbyterian — they wanted the ceremony to feel inclusive for everyone in attendance. 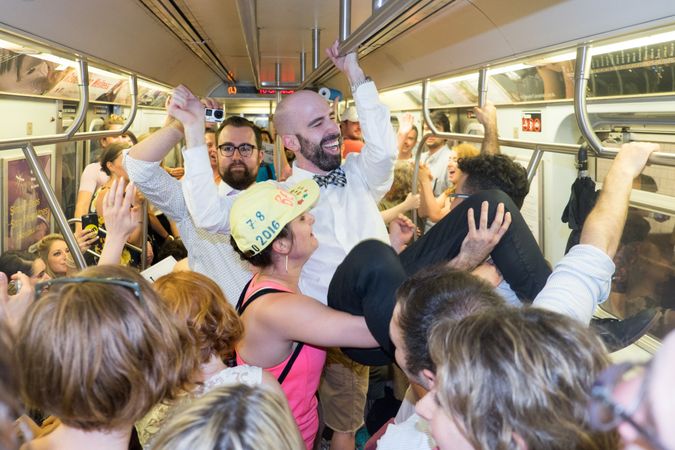 The groom does the hora on the subway. Image by Andrew Bisdale

“We felt that if we did the wedding at a church or a synagogue it might make people feel less welcomed,” she explained. “We chose a location where we felt we could make it more about the love that we share for each other. And hopefully honor parts of both our religions.”

Despite the quirky setup, the couple were firm on not skirting tradition.

“I really didn’t want him to see me before we did our vows. We had an agreement that he would stay on the main deck and my dad and I would be on the upper deck,” Hall recalled.

The bride entered to the sound of a violinist playing and the shouts of fellow ferry riders offering their congratulations. Per Jewish tradition, the couple circled each other seven times and Haskel, donning a yamurkle, smashed a glass beneath his foot to uproarious applause.

Later, the couple hopped off the boat and headed to their reception via the No. 1 train, prompting an impromptu hora through the subway aisle.

“That was my favorite part,” Haskel said. “There was no chair involved, but they lifted me up and down.”

The wedding party even picked up some unexpected guests along the way.

“On the subway, we were like, ‘well if you’re here, you’re invited to the reception,’” Hall said, giggling. “I heard that a small handful of people actually came.”