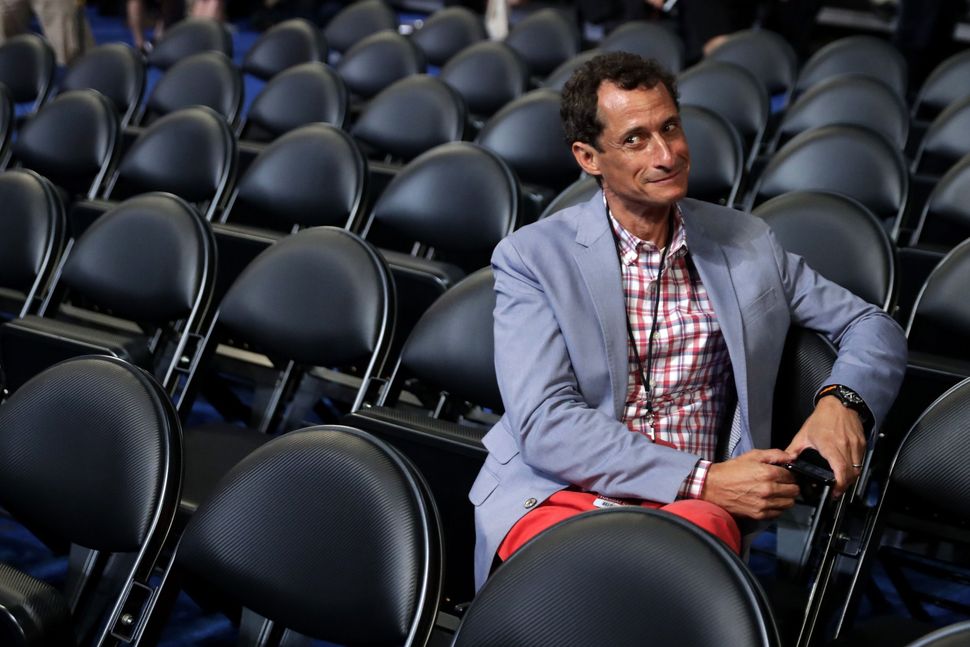 It all started after Weiner gave an interview on the floor of the Democratic Convention in Philadelphia, commenting on the possibility of Trump Jr. running for mayor of New York City. In his most eloquent Queens voice, Weiner said he would “come out of retirement just to beat him like a rented mule.”

.@anthonyweiner on @DonaldJTrumpJr 4 Mayor of NYC: “I’d come out of retirement just to beat him like a rented mule” pic.twitter.com/C9YCDZ74A0

That didn’t sit well with the eldest Trump sibling, who swiftly took to Twitter with a pointed remark about Weiner’s sex scandal.

Too soon Anthony!!! You probably shouldn’t be talking about beating anything ever again. Go back to your cave. https://t.co/Mingecu6o9

To which Weiner offered this response:

Is there a word for the baby of a trust fund baby?

The former Congressman from Queens has been making the rounds at late-night talk shows lately, appearing on Wednesday night’s Bill Maher, where he responded to Donald Trump’s comments from earlier in the day about the danger of Huma Abedin — Weiner’s wife and long-time Hillary Clinton aide — sharing intelligence secrets with him at home.

The idea of Trump Jr. running for mayor first came up on Sunday during his appearance on CNN’s “State of the Union” where he didn’t shut down the idea. Maybe even welcomed it.

“As my father has always said, I want to — we always like to keep our options open,” he said during the interview, adding, “So if I can do that as a service to our country I’d love to do it.”

What was the reaction from his father, the Republican nominee for president? Slow your roll, junior. During an appearance on Sean Hannity’s Fox News show, Trump Sr. said, “Don’s not going to run for mayor. No, he has no intention of doing that.”

But when pushed he left the option on the table, “Well, he’ll leave it open. Running for mayor of New York City — all right, I don’t see that happening. I don’t think that’ll happen. But he’s doing — he’s a very natural guy — he spoke like he’s been doing that all his life.”