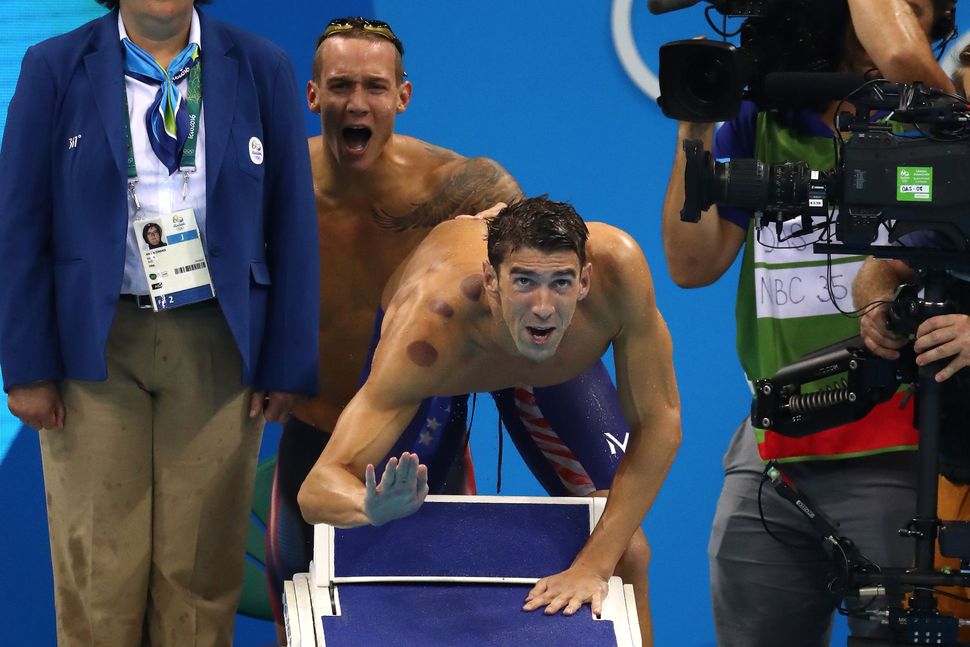 When Michael Phelps arrived at the pool for his first race of the 2016 Olympics, there was one question on everyone’s lips. No, it wasn’t whether the 31-year-old swimming phenomenon, the most decorated Olympian of all time, would be able to live up to his reputation as an unstoppable force in the pool. It was this: what was up with the round bruises all over his shoulders?

The answer is that Phelps, like a number of other Olympians – including American gymnast Alexander Naddour – has been using the ancient treatment of cupping during the games to help his muscles stay relaxed and healthy. Cupping is a folk medicine with roots in a variety of traditions, among them bankes, an ancient Jewish practice that was often accompanied by bloodletting. As Elizabeth Alpern wrote for the Forward in 2010, “The process of cupping involves placing a heated bell-shaped glass on the chest of someone suffering from a cold. In the shtetl, this cup was supposed to pull phlegm from the chest, relieving pain and pressure.”

“But cupping in association with blood-letting,” she continued, “goes back much further and is mentioned in the Talmud (Git. 70a ) and much later in the writings of Maimonides (Yad, De’ot 4:18) as a practice which should be used in moderation to maintain general health and a balanced constitution.” According to the Jewish Virtual Library, late Hebrew literature also contains instructions for cupping in conjunction with bloodletting.

Cupping therapy has traditionally involved heating specialized cups and then placing them on the skin, creating a vacuum; some modern practitioners use an air pump to achieve the same effect. Fans claim the practice draws blood to the areas targeted, helping muscles heal quickly. (As the New York Times reported, there’s not yet a significant amount of science supporting the idea.)

While it’s pretty inspiring to think about the process of cupping making it all the way from the shtetl to Rio, it’s even more so when you remember the practice also has origins in China, Vietnam, the Balkans, and the Middle East. Now that’s an Olympic medley we can get behind.