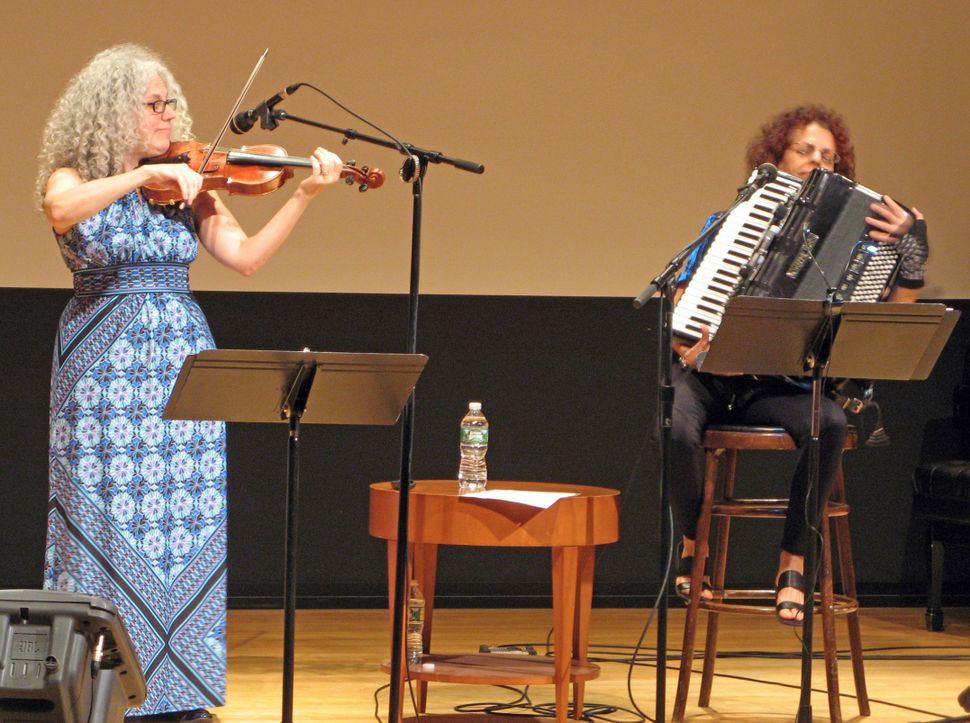 Svigals got the audience foot tapping with her klezmer “bulgar” and invited the audience to join in a sing-along of “Oy Tate“ (Oh Daddy!)— “a classic klezmer chorus for ‘Oy Got’— or Mama—if that is your conception of the deity.” She performed a song by cantor Moyshe Oysher who, she noted, recorded about his childhood with his sister Freydele—herself a cantor—about a house with a green roof, surrounded by trees and each year the father bings toys…a goat. a wagon—a song many in the audience knew (Bay dem shtetl, shteyt a shtibl, mit a grinem dakh…). 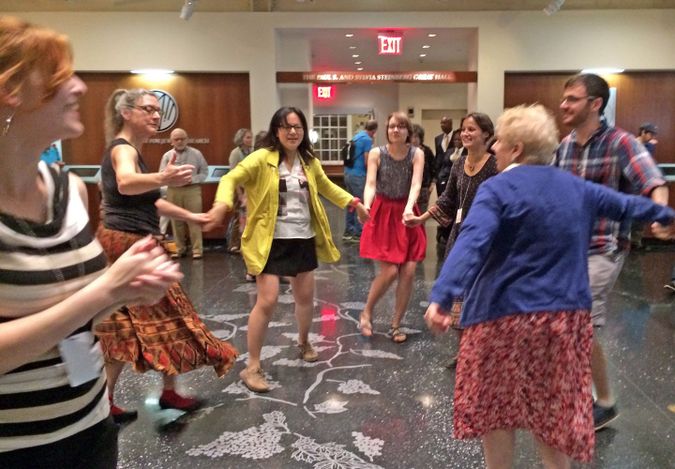 Svigals—on violin— and Brody—whose animated accordion playing—had me humming along throughout—shone the spotlight on Yiddish women poets “who wrote “froyen lider”—women’s songs.” Highlighted was legendary Kadya Molodowski shown in a projected film clip she declares:.”The women of my family will come to me in my dreams at night… We carry the pure blood across the generations.” Svigals delived a light-hearted synopsis on “Biblical feminist” Tamar and delighted with a song by Masha Shtuker Hayuk—“I’m Becoming My Mother.”

Listening to Molodowski’s recitative brought back the memeory of when I met her at Montreal’s Yiddisher Bibliotek— Yiddish Library in 1944 when – with a group of my Workmen’s Circle classmates—we were given a private audience as she read her poems to us.

Svigals recalled working at the YIVO under the aegis of then YIVO Executive Director Samuel Norich (in the audience and currently Publisher and CEO of “The Forward”). “What a blast that was!” reminisced Svigals also paid tribute to the late Yiddish singer Adrienne Cooper: “It was a magical time…with some members becoming the ‘Klezmatics’” then—elicited a chuckle- with her aside—“We are available for weddings and bar mitzvahs.”

The concert ended with a nosh and tentzl (dance) as—accompanied by indefatigable Svigals and Brody—people joined in circle dances late into the night.

What made the evening even more memorable for me was meeting a group of young students from the just concluded YIVO Yiddish Summer Program —several of whom are not Jewish—from Germany, Lithuania, Poland, Israel. Got to chat—remarkably beautiful articulated Yiddish— with Milena Wicepolska from Lodz (she tends to the Jewish cemetery there and gives tours). Outstanding was Meng Yang, one of three Chinese young women in the YIVO program who is writing a dissertation on the Jewish community in Shanghai during WWII and whose Litvishn Yiddish articulation blew me away.