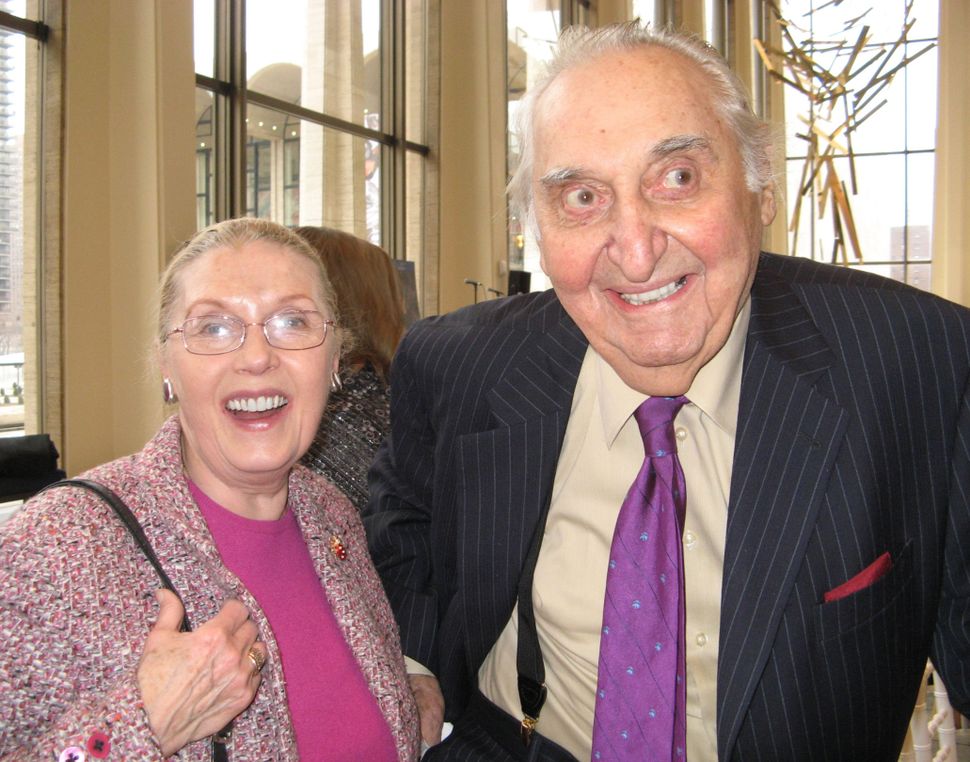 Fyvush Finkel’s adieu on August 14 elicited an avalanche of indelible memories—beyond his roles in “Picket Fences” and other TV venues. Among these: The June 21, 2004’s The Yiddish Artists & Friends Actors Club and Yiddish Theatrical Alliance bash at Lincoln Center synagogue at which then 81-year “young” beloved Yiddish vaudeville/theater legend celebrated. He touted his son Elliot Finkel at piano in a medley of Gershwin works and son Ian— virtuoso zymbalon player— who performed a sizzling version of “Rumania, Rumania” and then joined the crowd on the dance floor hoofing horas, freylachs and Russian kazatzkes.

At the 2006 “Broadway Salutes Yiddish”, a hyper Finkel shouted out “I’m Eighty Three years young and you’re my people!” Applause was the oxygen he breathed—-be it on stage or when entering a room where smiling admirers rushed over to touch him, to thank him, to shake his hand, to wish him well.

Though I had seen him on stage in —among others—his one-man character/lighting fast costume changing bravura performance, my first face-to face encounter was in 1988 for an hour-long English-Yiddish interview —in which he recaptured his lifetime on stage. He was then inhabiting the persona of a waiter in Joseph Papp’s stellar production “Café Crown” which featured Eli Wallach, Anne Jackson and Bob Dishy. But it was Finkel who elicited peals of laughter as he got the work-worn waiter’s stooped snail speed schlep/shuffle just right dragging himself from table to table irritating the [stage] customers.

Following the opening night performance, it was on to Sammy ‘s Rumanian where Finkel—dropping his slothful waiter persona—got out on the floor and bombastically vied for “center stage” competing with Jackie Mason, Jerry Stiller & Anne Meara and delighted the corned beef and mamelige-feasting audience.

A highlight of his career may well have been the January 7, 2007 Yiddish staging of Neil Simon’s “The Sunshine Boys”. Theodore Bikel as Anschel [the irrational unforgiving Walter Matthau character Willy Clark] and Finkel as Velvel, the more amenable Al Lewis character portrayed by George Burns]. What a joy to watch these masters hurl Yiddish venom-tipped javelins at each other!

A most poignant recollection is the National Yiddish Theatre Folksbiene’s December 2, 2013 “Miracle of Miracles” Gala at which Theodore Bikel (90), Finkel (91) and still sharp-as-a-tack 102 years Bel Kaufman introduced the evening’s honoree Bikel. So vital seemed this trio of national Yiddishkeit treasures— belying the stereotype of “aging”—with those who were there remembering Finkel (who then sported a cane—no longer a theater prop but for medical support) pulling out all stops as he mimed, sang and danced on stage to thunderous applause.

Possibly his final stage performance was the June 9, 2014 “Raising the Roof: A Tribute to Fiddler on the Roof” at which 91-year old Finkel danced onto the stage as the character Lazer Wolf—the butcher—who had argued with Tevye the Milkman (portrayed byMike Burstyn). No doubt Fyvush Finkel is now singing and dancing for the angels.