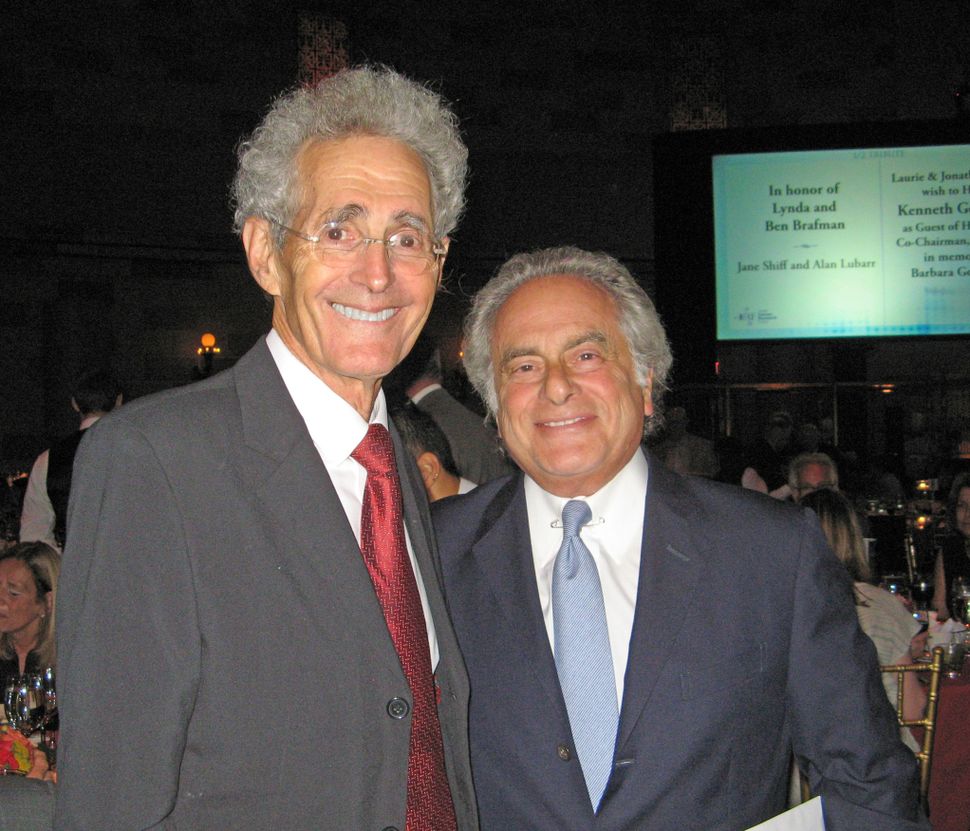 “Am delighted to see that there is no height requirement to be Consul General of Israel,” joshed criminal lawyer Benjamin Brafman, emcee at the September 13th Israel Cancer Research Fund Tower of Hope Gala, as he introduced Israel’s newly appointed consul to New York Dani Dayan who delivered a brief address to the 300 guests at Gotham Hall praising the guests for their support of ICRF’s work.

Acclaiming “ICRF [as] the largest voluntary charitable organization in North America supporting cancer research in Israel for the benefit of all humankind,” Brafman introduced guest speaker Howard Cedar M.D., Ph.D. who held the guests spellbound with his spin on the latest in cancer research. Recipient of a number of prestigious prizes—including the Wolf Prize in Medicine (2008), the Emet Prize in Biology (2009), the Rothschild Prize (2012) and recipient on September 6th of Columbia University’s Horowitz Prize for achievement in biological and biochemical research [first awarded in 1967—43 of whose winners went on to Nobel prizes], Cedar had Brafman gushing: “Dr. Cedar—my number is on you!” Cedar declared: “I am not representing myself here…I’m here in the name of my colleagues in Israel—devoted scientists who have given their whole lives to solve the secret of cancer.”

“I want to thank you for bringing me here to the U .S.,” said Cedar. “[T o] my old home, my incubator in the 1960’s where I grew up and also want to thank ICRF for their wisdom in planning this event exactly one day after the world premiere of our son Joseph’s new ‘must see’ movie “Norman” which stars Richard Gere, Michael Sheen and Steve Buscemiwhich just premiered at the Toronto International Film Festival.“

Cedar informed: “After decades of using chemotherapy scientists decided that this method of killing cells was too general, non specific and began to search for ways to target cells ushering in an entirely new approach…. Israeli scientists with the support from ICRF made unbelievable major contributions to this ongoing effort…. Israeli scientists laid down the basic work behind the creation of the miracle drug Gleevec for leukemia…Receptin for breast cancer and our own Nobel Prize winners [Avram] Hershko and [Aaron] Ciechanover who made Velcade possible for prostate cancer” and more…ICRF is unique in its approach; it has funded projects using flies, worms, fish, mice—all in an attempt to understand how cells tick… And nothing is too esoteric for them to support.”

Apropos “deciphering the underpinnings of cancer”, Cedar cited “an esoteric project” at understanding how our genetic code is read and interpreted in the cells of our bodies. “Each of us has a book with all our genes that we received from our parents which serves as an instruction manual. In addition to the [DNA] text there is a system of annotation, footnotes that mark the text…. Where is this lightning coming from? Israeli scientists have grown out of a culture of seeking knowledge…from the time of the Talmud we have learned to ask question…how to criticize and dig deeper…how to give credit to those who came before us and build on their knowledge…to work toward Tikun Olam—make the world a better place…. Research thrives when society wants it…values it…is willing to give up other things to promote research…. This is a culture deeply ingrained in the Jewish People upon which ICRF is built.”