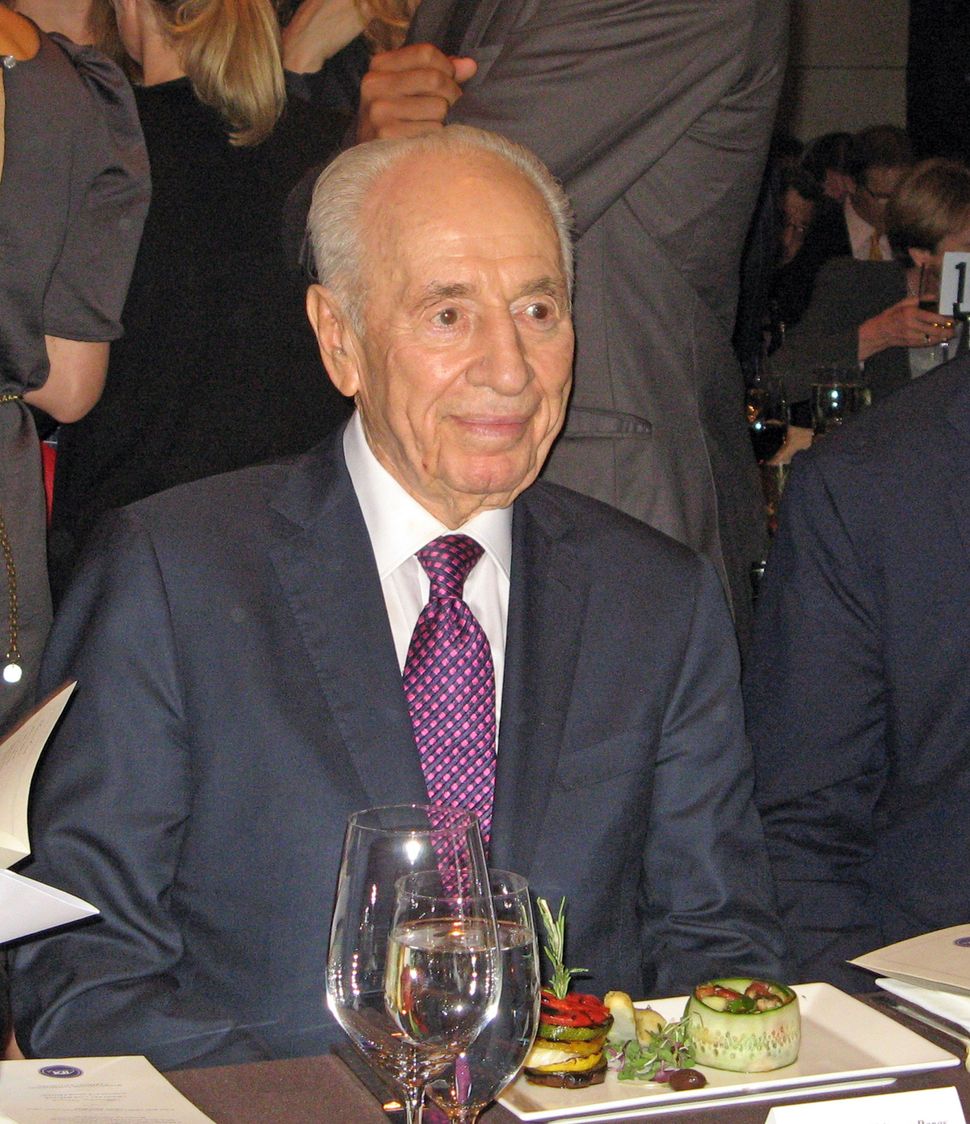 Shimon Peres —former Prime Minister of Israel and Nobel Laureate who died in Tel Aviv at 93 on September 27— left a most memorable imprint with his address at the September 18, 2000 Center for Middle East Peace and Economic Cooperation dinner at the Waldorf Astoria at which he was the honoree.

In keeping with the peace theme, white porcelain Lladros “Peaceful Doves” rested amidst floral centerpieces and at tables sat diplomats from Norway, Yemen, Qatar, Oman, Egypt, Spain, Cyprus, the United Kingdom of Morocco with Israel’s then Ambassador Yehudah Lancry and ConsulShmuel Sisso looking on as New York Senator Chuck Schumer – hobbling onto the platform on crutches—touted Peres as “someone who had put the ideal of peace and no alternative into practice.”

“Shimon will be remembered for his efforts in beginning a dialogue between the Arab and Israeli people,” said keynote speaker Henry Kissinger “Without Shimon we would not be where we are today.” Special guest Madeleine Albright dubbed Peres as “a peacemaker among peacemakers, a doer, a taker of risks and one of the bravest and most principled political leaders of our time…. There are still some Israelis and Palestinians who seem almost afraid to compromise, as if yielding ground were the same as shedding identity…. Today Israelis and Palestinians are much more than halfway from the far shore.”

“Making peace is like falling in love,” Peres responded. “Close your eyes a little, be a little generous but never forget that you are two—not one. The greatest diplomat we have in history is The Messiah—because he has never arrived. There is a Moses, there is Christ, there is Mohammed…. The music of Jerusalem honors God with the shofar, the bell and the muezzin… The present generation is more global…. Why should they kill and be killed? It is our human qualities, — our brains, it’s discoveries that count-not the land!”

As guests departed— a lucky few clutching centerpiece doves—they wished one another a “happy and peaceful Rosh Hashanah.”

The last time I spoke with Peres was at the September 2014 Anti Defamation League gala dinner at The Mandarin Oriental at which its then National Director Abraham Foxman presented him with an Agam menorah lauding Peres’ “focus on medical research and technological advances” as a means of “bringing about peace.”