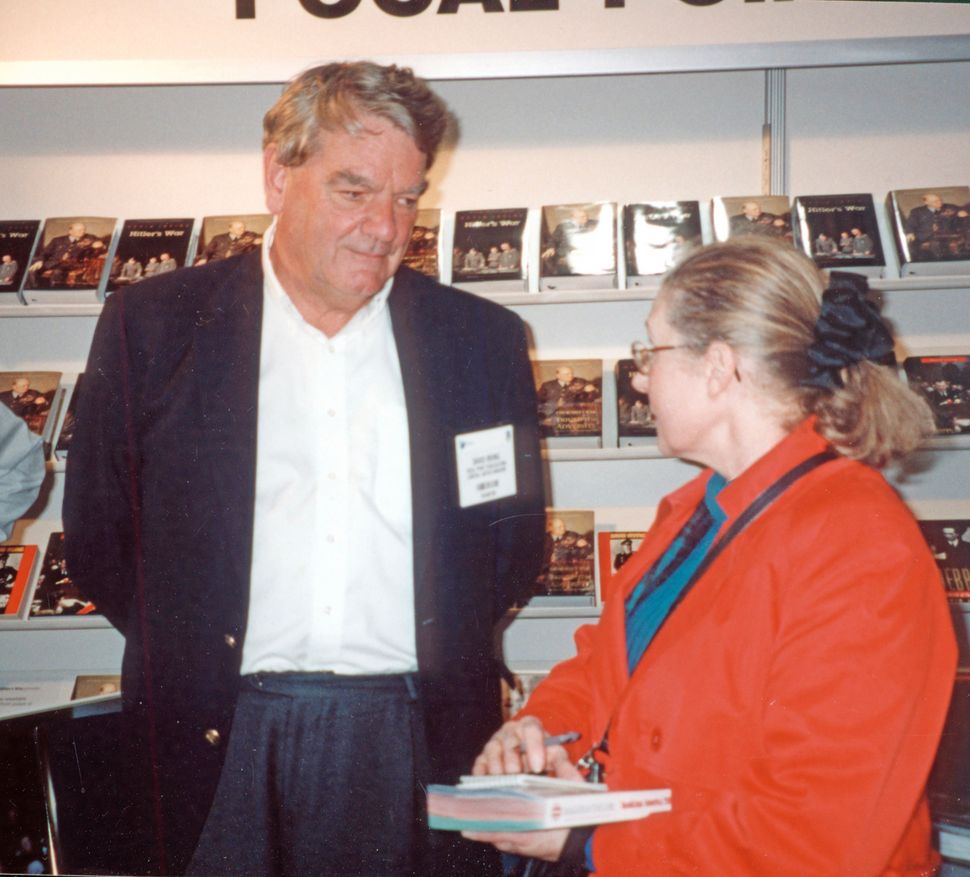 Watching “Denial” — the riveting film recreation of the libel suit brought against Prof. Deborah Lipstadt [British actress Rachel Weisz] by British Holocaust denier David Irving [British actor Timothy Small]— I had a visceral reaction. Notwithstanding his stellar portrayal as Holocaust denier Irving, Small [who portrayed Churchill in “The King’s Speech”] did not physically match the imposing Irving with whom I had engaged in an unanticipated Lipstadt/Holocaust-related exchange two years after the trial.

It was on May 3, 2002 as Karen and I were walking down the aisles of Book Expo America at the Javits Center that we were intrigued by a booth sporting huge posters of Churchill, Adolf Hitler and otherWWII personas. A tall, affable man waved to us to come in. We chatted pleasantly when I noticed a table stacked with copies of “Hitler’s War.” Responding to our reaction, he informed: “This book proves that Hitler knew nothing about the ‘Final Solution.’” Looking closely at his badge I realized that this welcoming grey-haired man was Holocaust denier David Irving! Karen backed out of the booth as Irving— looking at my badge—exclaimed: “Ahh! The Forward! Pity that Yiddish was not the language of Israel. It is such a congenial language. Hebrew is an affectation, as though Romans today began speaking Latin.”

As I turned to leave he said: “I have the Forward articles on my Web site…I have problems with Lipstadt.” I rebutted that I was the only survivor of an extended family of nearly 200 who perished in 1942-43 as the Einzatsgruppen—Nazi mobile execution squads—made their way through Belarus—all documented. That I lost all my aunts, uncles, cousins, grandparents with some perishing in the Warsaw Ghetto. “Weren’t they all sent to Treblinka?” Irving interjected blocking my attempt to leave the booth.

“I never said I denied the Holocaust,” said Irving. I replied: “The Anti-Defamation League has warned the public about you…you’re saying that the Holocaust of the Jews in Auschwitz and the gas chambers is a fabrication.” Irving laced into then ADL director Abraham Foxman castigating him for claiming to be a survivor inasmuch as “he had been hidden as a child by Christians.” I countered: “Had he not been hidden, he’d have perished…Whether in ghetto or camp or with partisans —we were all slated for extermination.”

As I left his booth, Irving called out: “I too am a survivor! I would have suffered the same fate had Hitler invaded England!” During the next few days of the convention as Karen and I revisited exhibitors on his aisle, Irving —spotting us—would call out” Don’t be afraid! Come in!”

My most recent encounter with Deborah Lipstadt was at the 2014 U.S. Holocaust Memorial Museum dinner in New York. Professor of Modern Jewish History and Holocaust Studies at Emory University, Lipstadt— standard-bearer of the battle “To Remember”— declared: “We can’t be afraid. We can’t be angry. We can’t go from being exclamation points to being question marks.”