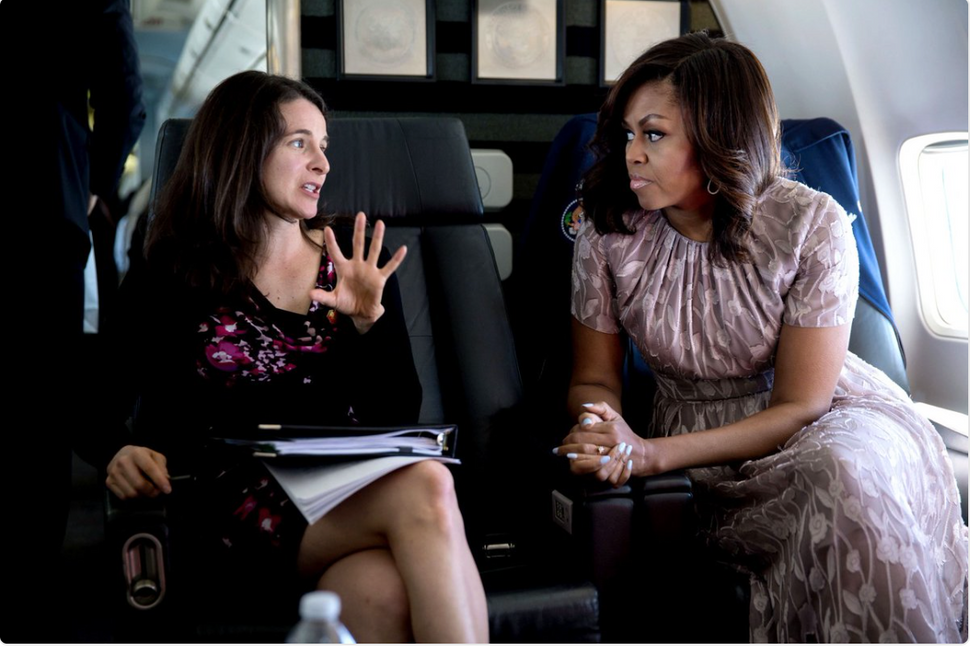 In it, Clinton talked about her run for the presidency and how she didn’t quite break the glass ceiling, but instead left behind “about 18 million cracks in it.” She gracefully complimented her opponent, and empowered listeners to get behind the democratic ticket.

Two days later, Hurwitz got a phone call from the Obama campaign, inviting her on board.

For seven years, the 39-year-old Harvard Law School grad has been responsible for writing Michelle Obama’s speeches. The two first joined forces during a 90-minute meeting in Obama’s living room in Chicago, where they mapped out the future first lady’s speech at a 2008 Denver convention — the very same one Melania Trump would later be accused of plagiarizing.

She talked about her working-class background, the family values she and Barack share and the importance of dignity and respect.

“[Michelle Obama] clearly said to me: ‘Okay, this is who I am. This is where I come from. This is my family. These are my values, and this is what I want to talk about at the convention,’ ” Hurwitz recalled in an interview with the Washington Post. “I realized then that Michelle Obama knows who she is, and she always knows what she wants to say.”

The first lady is known to practice weeks in advance of delivering one of her speeches and is not one to ask for any sort of last-minute fixes.

“As I write for her now, I’m sort of editing the speech with her voice in my head because she’s given me so much feedback over the years and been so clear about what she wants,” Hurwitz told the Post.

The hours that go into being the first lady’s speechwriter are long, and Hurwitz unwinds by taking Judaism classes in her spare time and working out on the elliptical (where she often gets bursts of ideas).

While she is intimately involved with each and every word the first lady delivers, Hurwitz can still find herself moved while listening from the sidelines.

Hurwitz recalled being particularly emotional during a speech at Santa Fe Indian School in New Mexico.

“I thought to myself, ‘I am watching the great-great-granddaughter of a slave give a speech to a room of Native American kids, [and] the vast majority of them are going to college, and many to Ivy League schools,’ ” Hurwitz said. “To see that — this is a great country.”

During her talk, Obama called the republican nominee’s comments “shocking” and “demeaning.” She never referred to Trump by name, only as a candidate. Her supporters rejoiced on social media.

Every time you get depressed knowing this world has a Donald Trump, stop and remember it also has a Michelle Obama. ????

That Michelle Obama speech put a lump in my throat and tremendous pride in my heart both times I watched it. Brava, madame First Lady. ??

“Let’s be very clear, strong men, men who are truly role models don’t need to put down women to make themselves feel powerful,” Michelle Obama said. “…We are telling our sons that it is okay to humiliate women, telling our daughters that this is how we deserve to be treated, that bigotry and bullying are perfectly acceptable. Is that what we want for our children?”