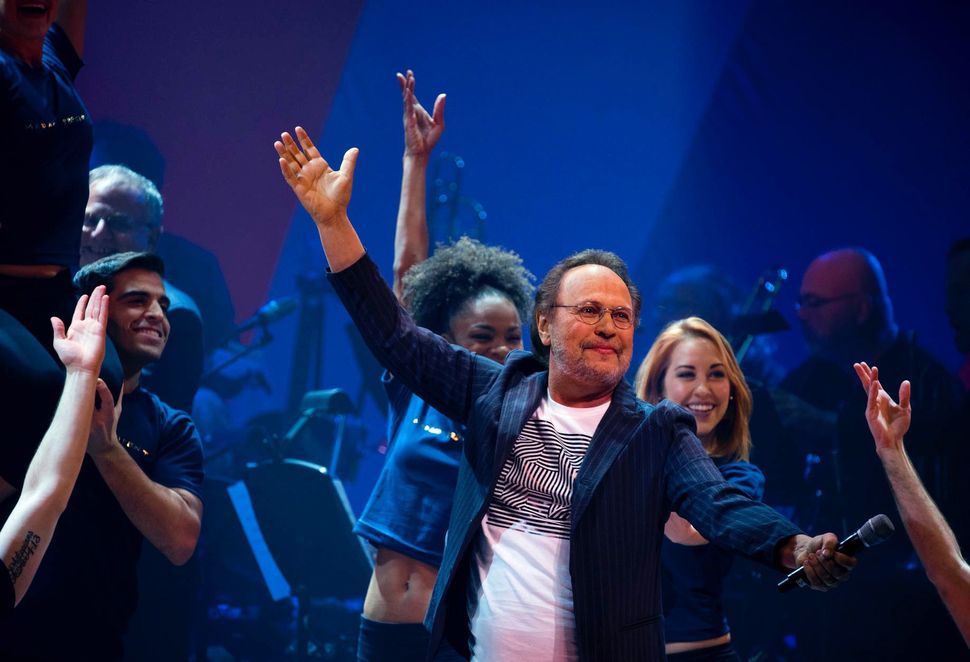 On Monday night, the stars of Broadway and Hollywood crammed into one midtown New York theater to headline a benefit concert for Hillary Clinton. Predictably enough, many Jews ended up in the show, from Joel Grey of “Cabret and “Chicago” fame, to Matthew Broderick of “Ferris Bueller’s Day Off,” to the queen herself, Barbra Streisand. In between American classics from Broadway and elsewhere, master of ceremonies Billy Crystal managed to sneak in some great wisecracks.

Here are five of the best.

Donald Trump is notoriously sensitive about the size of his fortune, and he’s even sued people who question his billionaire status. Crystal went in for his mark. “Our goal tonight is simple: we need to raise more money than Donald Trump lost in 1995.” he said to the crowd, mocking the Republican’s record billion dollar loss that year. He also made a pun on the show “How to Succeed in Business Without Really Trying,” rechristening it in Trump’s honor “How to Succeed in Business Without Paying Your Taxes and Filing for Bankruptcy.”

2. Tomorrow Belongs to Him?

Since Trump’s rise, Nazi comparisons have become commonplace. Crystal riffed on that as Grey was about to launch into “Wilkommen,” a song from “Cabaret.” He said that the musical “is set in Germany in the late ‘30’s — or as Trump and Pence call it: ‘the good ol’ days.’”

Trump is known to hate on anyone he perceives as an enemy, taking to his Twitter soapbox to savage them. Crystal mocked that tendency on Monday night. Crystal slammed Trump’s repeated threats to sue media outlets over less than flattering stories about him. “At one point Trump was the boy who cried Wolff Blitzer,” he said, referring to the CNN anchor.

Crystal told the audience his badmouthing of Trump shouldn’t be looked down upon, citing Trump’s own excuse for sexual assaulting women. “I can say whatever I want, because I’m a star,” he said gamely.