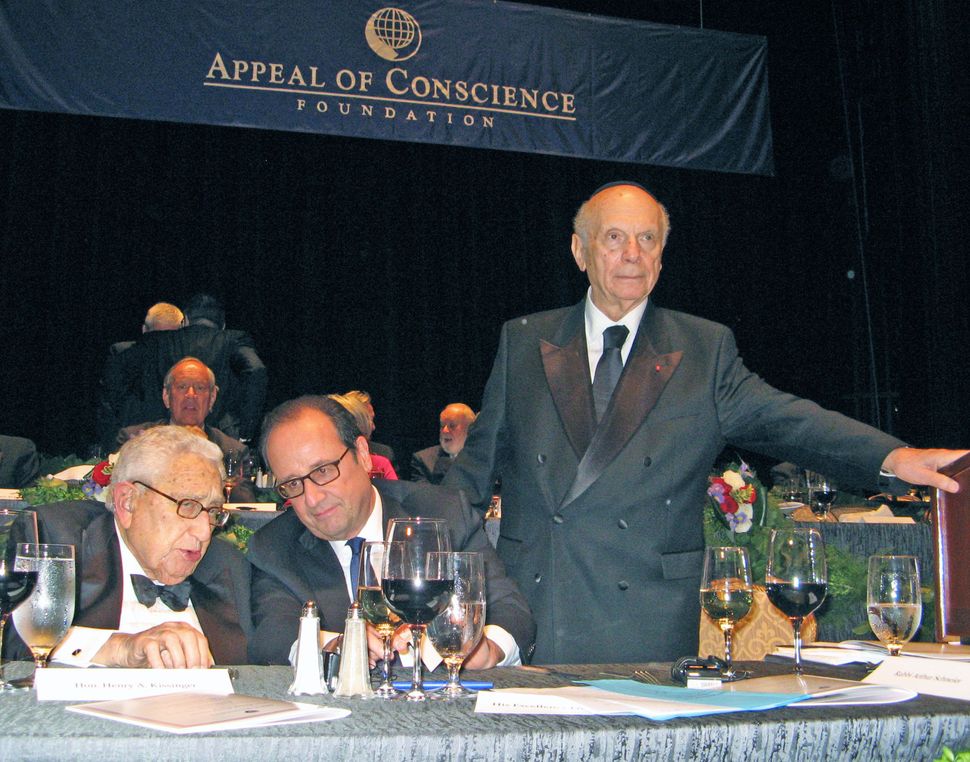 “Je suis la France!” declared Rabbi Arthur Schneier founder of the Appeal of Conscience Foundation addressing a veritable United Nations assemblage at its 2016 Annual Awards Dinner at the Waldorf-Astoria as he introduced the event’s honoree France’s president Francois Hollande. Touting M. Hollande as “ someone who has “established himself as an integral player in modern climate talks,” Schneier, Senior Rabbi of Park East Synagogue, applauded President Hollande as someone “who brought the same determination and backbone when dealing with the global fight against terror…in Mali, Syria and Iraq…. At a time when countries around the world were withdrawing and when terror struck France, he remained true to that vision.” Schneier thanked Hollande for “guarding the security and safety of every house of worship in France—synagogues, churches, mosques and for your commitment to give freedom breathing space regardless of religion, race or color.”

There were greetings by former chairman of the Federal Reserve Paul Volcker and comments by Stephen Schwartzman CEO of The Blackstone Group and a past Appeal honoree who informed that “when suicide bombers struck the streets outside a football stadium where he sat with tens of thousands of people watching the France-Germany football match, Hollande faced two impossible options—evacuate the stadium and risk sending the crowd into the hands of waiting militants or take the chance of staying inside the stadium with danger of being a large scale target…or letting the match continue. It is decisions like those that are the mark of true leadership…like the decision to walk arm-in-arm with Jewish and Muslim statesmen days after the Charlie Hebdo attacks.”

President Hollande—in French—offered a recitative of the world’s current upheavals: “Even democracies are being challenged…we are the world…we have to share the responsibility for the planet.” Recalling his visit to Auschwitz on the 70th anniversary of its liberation, he quoted Elie Wiesel and touted France’s [secularity] “laisite”—We are all equal—it is a freedom that France offers to all its citizens.” Henry Kissinger—a regular Appeal presence—thanked Schwartzman for his effusive introduction noting: “I appreciate the kind words…. it reminds me of a party I attended and lady came up to me and said: “’I understand you are a fascinating man. Fascinating!’ It was one of the less successful conversations.” Kissinger launched into a long sonorous commentary touting France’s contribution to global culture, to the building of European security …that today France stands once more at the fulcrum of events—both a target of terrorism and a symbol of civilization.”

Presenting a crystal globe to Hollande, Schneier said: “Not only are you a patriot of France, but a patriot of the globe.” The invocation was by His Eminence Cardinal Timothy M. Dolan,Archbishop of New York and the closing Benediction by His Eminence Archbishop Demetrios, Primate, Greek Orthodox Archdiocese of America.