How the Hebrew Home Is Reinventing the Dating Game for Seniors 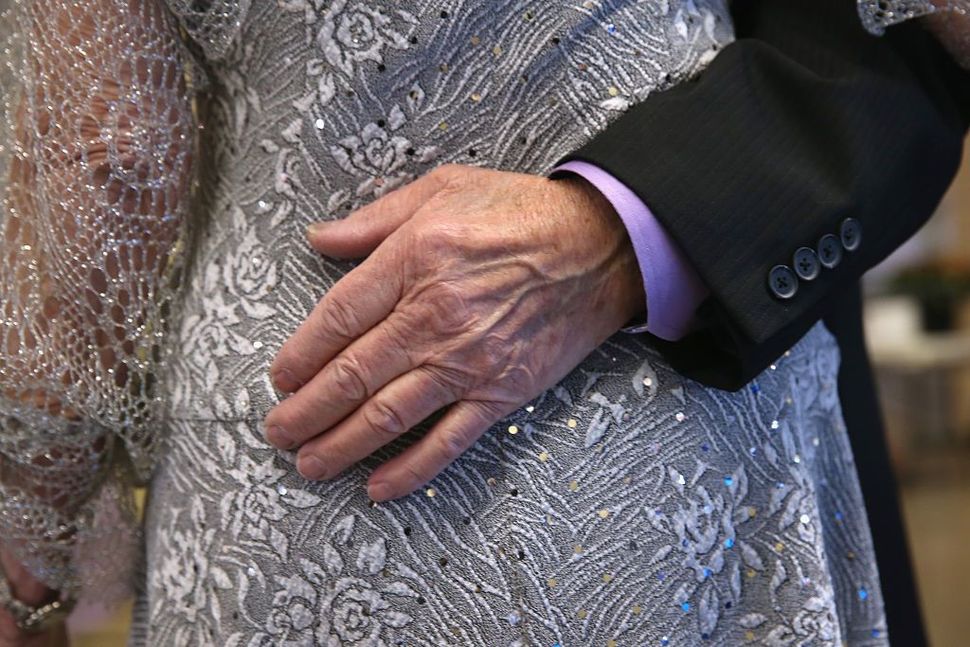 On a recent drizzly Thursday afternoon, David Seligman, 88, sat in his sparsely furnished room at the Hebrew Home in the Riverdale section of the Bronx, waiting to be wheeled downstairs for his first blind date.

Seligman had gotten a fresh shave for the occasion and munched on a sandwich in the hour leading up to the date.

“I just thought I would try something new,” he said. “Just to be an adventurous spirit on a minor scale.”

Like other residents at the Hebrew Home looking for love, companionship or just a change of pace, Seligman had signed up for the matchmaking service G-Date, short for Grandparent Date.

Interested applicants fill out a two sided form (“Are you a romantic?” “What kind of relationship are you looking for?” “What do you like to do?”) that is handed over to the Hebrew Home’s team of social workers.

Then the matchmaking begins.

“They go through the application carefully,” Wendy Steinberg, Hebrew Home’s vice president of communications, said. “There’s a lot of give and take in the conversation, until they ultimately figure out who would be best suited for one another.”

Once a match is settled on, each senior receives a note congratulating them on their upcoming date. A meeting time is picked, beauty parlor appointments booked and, should they want it, staff on hand to help them select their outfits.

A special table—complete with a waiter for the occasion—is reserved at the home’s café, overlooking the Hudson River.

It’s an innovative approach to dating for seniors—and just one aspect of the Hebrew Home’s willingness to acknowledge senior’s emotional and sexual needs.

The Hebrew Home is the first senior residence of its kind to institute a sexual expression policy, which allows residents to engage in any form of consensual sexual activity they wish.

The arrangement came about in 1995 when, according to the New York Times, a nurse walked in on two residents having sex. She asked Daniel Reingold, the president of the nursing home, what to do and he instructed her to leave quietly and close the door.

“Love is ageless,” Charlotte Dell, the Hebrew Home’s Director of Social Services, said. “Needs don’t change as you get older, that need for intimacy and companionship.”

If anything, Dell explained, it becomes even greater of a desire, particularly after the loss of a spouse or partner.

Seligman, a native New Yorker, has been a resident of Hebrew Home for about six months. He didn’t tell anybody about his upcoming date.

“I don’t have any family except three nephews,” he said. “Everyone is gone.”

Seligman’s wife passed away after 16 years of marriage and he has gone on only a few dates since.

A few floors down, Seligman’s date for the afternoon, Beverly Herzog, 89, sat in a warmly decorated room filled with knick knacks and pictures of family and friends. She wore coral lipstick and multicolored beads wrapped around her wrist. During our chat, an attendant popped in to surprise her with a bag of Lays potato chips.

“You are such a pussycat,” she responded, smiling back at him.

Herzog has jumped into Hebrew Home’s social scene with a sense of determined enthusiasm. She attends LGBTQ meetings as an ally. She instituted regular social mixers with beer and wine at the Hebrew Home so the residents can mingle. (While those socials have been a hit, she did note that there can be some drama—-particularly when it comes to women fighting over the sizably smaller male population.)

“This is the loneliest time of your life,” Herzog explained. “I appreciate company. I don’t like to be alone. I don’t think anybody wants to be alone.”

Herzog had already gone on one G-Date, which she enjoyed. He asked her to drinks in his room after, which she politely declined.

“I don’t got to rooms for drinks,” she said.

Herzog had been married for nearly 50 years and, like Seligman, noted how hard it is to find a partner who measures up.

“You’ll always compare it to the one you were married to. Especially if it was a happy marriage,” she said.

Maybe that is why, so far, full-blown romantic relationships have not sprung from G-Dates. But sometimes friendship have developed.

When the time came for the big meeting, Herzog took the bag of potato chips and put it in her lap as she was wheeled downstairs. It would be a little gift for her date.

Seligman wanted privacy during their meal, so I waited in another room while the two dined.

After about an hour, Herzog was wheeled away while Seligman waited behind at their table. He was happily snacking on a chocolate vanilla treat when I joined him.

They had talked about their lives, he said, and their shared love of Turner Classic movies and television shows about doctors.

“She expressed enjoyment and I said the feeling was mutual,” he said, smiling. “I think it went pretty well.”

True to form, Herzog had made a hard sell to get him involved in the home’s social scene.

“She wants me to get more into the activities,” he explained. “I said I’d have to find out what those activities are. She said she’d get me going.”

And would the two of them go out again?

“No great love or anything like that. But it was very pleasant,” he said. “I think I could see her again.”

How the Hebrew Home Is Reinventing the Dating Game for Seniors