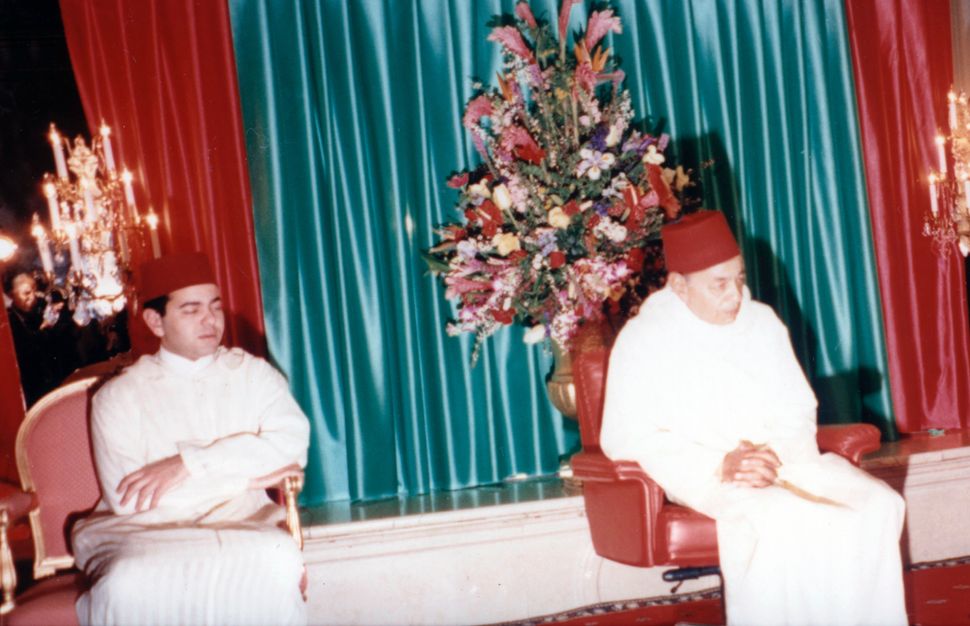 With Hillary Clinton and king Mohammed VI of Morocco in the news, I recalled my March 23, 1995 meeting with his father—King Hassan II at a reception hosted on behalf of the Presidents of The Conference of American Jewish Organizations—a then first by an Arab monarch for a Jewish organization. Invited by telephone, my instructions were to RSVP to the Moroccan Embassy in Washington, D.C. Upon arrival at The Plaza, I was handed a gilt-embossed official invitation by a white robed royal retainer.

In the Terrace Room—transformed into Throne Room—King Hassan, in a long white robe— sat on a red leather swivel chair-become throne. Behind him— a floor-to-ceiling green satin curtain bracketed by multi candled torchiers in front of which was a huge floral arrangement. At a little distance on plush chairs to his right sat his son Prince Moulay Rachid— to his left — in a gold lame gown—a bejeweled daughter —Princess Lalla Hasna.

The king listened intently as then Conference president Lester Pollack greeted and praised the monarch touting “his record” vis-à-vis the Moroccan Jewish community as having been exemplary. King Hassan spoke at length about “peace in the Middle East”, personally vouching for the [then] Palestine Liberation Organization’s commitment to this peace.

The Plaza’s venerable Palm Court had been transformed into an Arabian Nights chocoholic heaven with gargantuan boxes of French chocolates stacked on tables and carpeted floor plus huge bowls of candied fruits, nuts and assorted Moroccan sweets.

Members of the king’s entourage—in flowing white garb and head covering— sat cross-legged on carpets and poured tea from sterling Samovar-like urns. After over-indulging in caffeine-loaded goodies, was directed to dinner that was being served at tables groaning under whole roasted lamb, bowls of couscous and platters of okra topped with sunny-side up egg coronas. The Jewish guests demurred. The only people indulging in the spread were consular notables and a contingent of U.N. diplomats who sliced away at the juicy meat with gusto. Also left nearly untouched by the Jewish guests was an entire balcony of tables groaning under devastatingly seductive dessert. No doubt someone failed to inform the king’s culinary entourage about the proscriptions of kashruth.

Leon Levy (then president of the American Sephardi Federation and newly elected chairman of the Presidents Conference) introduced me to Andre Azoulay, a Moroccon Jew and counselor to King Hassan [and senior advisor to the present king Mohammed VI] and to ** Serge Berdugo** —[then] president of Morocco’s Jewish community and former minister of tourism.

Throughout the evening, Mr. Berdugo—along with —immediate past president of the Conference—Malcolm Hoenlein were engaged in futile attempts with some of the photo enthusiastic Jewish guests trying to keep them behind an imaginary monarchial Maginot line.