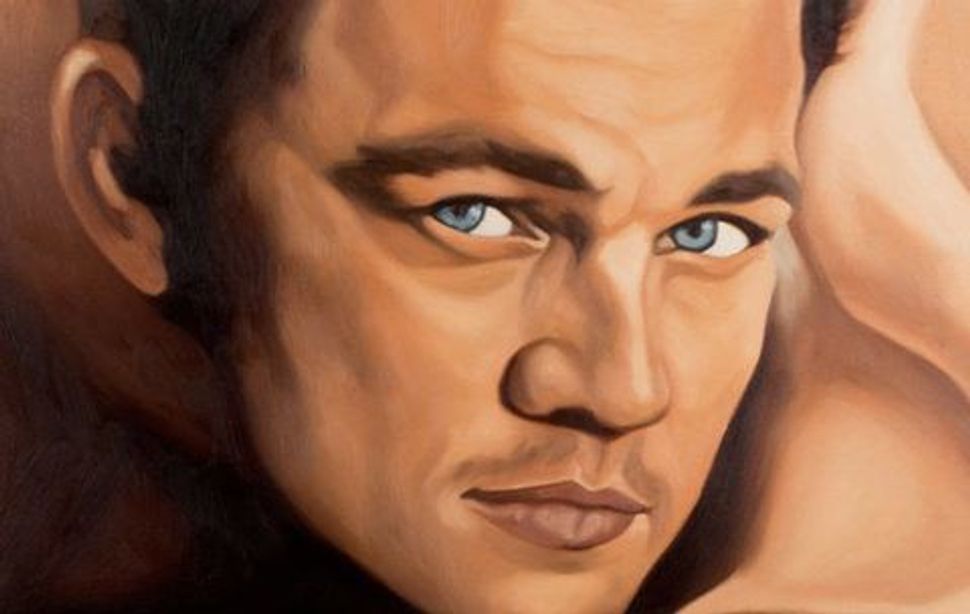 Alexandra Rubinstein, a 28-year-old Jewish, Brooklyn-based artist, was working on a series of paintings inspired by vintage pornography when she noticed something disturbing.

As she went through the process of recreating footage of women in the throes of passion, teeth gritted, heads thrown back, she realized how much the films focused on the male gaze. There wasn’t a single frame that showed sex from a woman’s point of view.

The time had come, Rubinstein decided, to flip the script.

Her new series “Dream Come True,” features popular male celebrities like Drake, James Franco and Leonardo Dicaprio about to, or in the act of, performing oral sex. The artist’s point of view takes the audience’s gaze straight down her torso to the famous face right between her legs.

The paintings are completely realistic — eerily so — and when I told Rubinstein that they made me blush a little, she didn’t seem too surprised. Based on reactions so far, she’s noticed that women have been responding more “timidly” than men. Plus, she noted, more men than women have been buying the prints.

“I think men are more comfortable seeing sexual imagery because it’s more socially acceptable for them to look at it,” she mused.

This is perhaps thanks, in part, to how oversaturated the male gaze is in mainstream media.

Case in point: “Blue Valentine,” a drama released in 2010, was slapped with an NC-17 rating because it involved a woman receiving oral sex.

In an open letter to the Motion Picture Association of America, Ryan Gosling, one of the film’s stars, rebutted the rating writing: “The MPAA is okay supporting scenes that portray women in scenarios of sexual torture and violence for entertainment purposes, but they are trying to force us to look away from a scene that shows a woman in a sexual scenario, which is both complicit and complex.”

The rating board’s squeamishness is completely one-sided and oddly selective. “The Girl With the Dragon Tattoo,” a drama released in 2011, for instance, was rated R despite featuring brutal rape scenes.

Rubinstein earned her BFA at Carnegie Mellon University, and has been (as she says in her bio) “crushing the patriarchy and having fun with it” ever since her first exhibition in 2010.

Her work is an exploration, often amusingly, of human sexuality, including series titled “If These Genitals Could Talk” and “I Get It For the Articles,” a selection of paintings inspired by vintage “Playgirl” issues. The latter also challenges the idea of the male gaze, flipping perspective and displaying men’s bodies in a vulnerable way.

The biggest sellers of her latest series have been Drake and (Rubinstein’s personal favorite) Jon Hamm. It’s also worth noting the painting’s tongue-in-cheek names: riffing on his rap hit, Drake’s painting is titled “Best I Ever Had,” and Rubinstein did some clever tweaking of Leonardo DiCaprio’s 1993 film “What’s Eating Gilbert Grape?”— now aptly titled: “What’s Gilbert Grape Eating?”

And who is the one celebrity who has yet to fly off the shelf?

“There have been no Justin Bieber sales yet,” she said, laughing. “No one wants Bieber going down on them.”