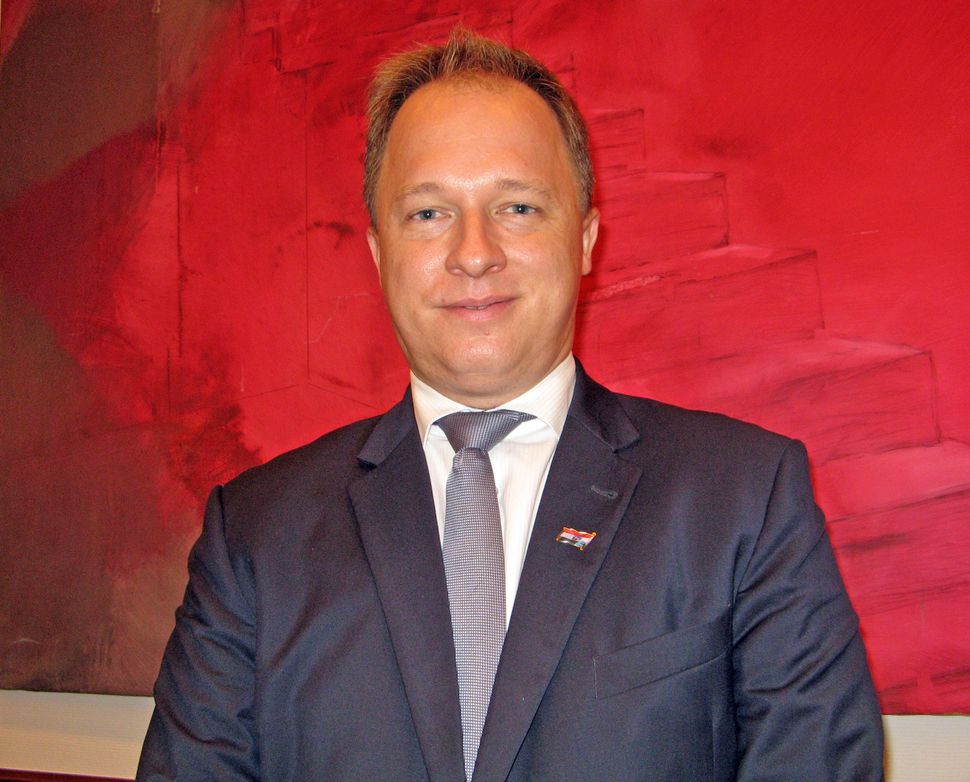 The Budapest Symphony Orchestra’s upcoming December 1 Concert at Budapest’s glorious Great Dohany Street Synagogue was announced by Hungary’s Consul General Dr. Ferenc Kumin at the New York consulate’s Commemoration of the 50th Anniversary of the 1956 Hungarian Revolution [which began on October 23, 1956 as a national revolt against Soviet occupation and repression]. The Dohany concert —featuring six time Grammy Award-winning pianist and conductor Daniel Barenboim and BFO founder and conductor Ivan Fischer— will be the launch of the BFO’s concert series in abandoned synagogues which was begun two years ago. Through these synagogue concerts the BFO aims to visit every abandoned synagogue in the country. The BFO will also offer free concerts at Hungary’s elderly homes and childcare institutions.

“What was it like back in 1956—to suffer under Communism in Hungary?” posited Amb. Kumin. Quoting from a “Victims of Communism Foundation” study he stated: “One third of the millennials believe that more people were killed under George W. Bush than under Stalin…twenty-five percent have a favorable view of Lenin… half of the millennials believe that Communism was a problem compared to 80% of Baby Boomers and 91% of elderly Americans…. Quite a radical difference.”

Chairman of The Friends of the Budapest Festival Orchestra Stephen E. Benko thanked the event’s board members whose roster included event chair Sylvia Hemingway, honorary chair Daisy Soros, Ambassador to Hungary (1994-1997) Donald M. Blinken and journalist/writerKati Martin whose late husband was ambassador Richard Holbrooke and in her vivid autobiography “’Enemies of The People: My family’s Journey to America” describes her 1956/57 childhood eyewitness memories of Hungary in “The Communist Terror State.”

Touting BFO founder Fisher, Benko informed: “After only thirty years in existence, the BFO is now one of the top ten orchestras in the world! As proof of its stellar renown, the one hundred guests at the consulate were treated to a vibrant performance of Felix Mendelssohn String Quartet No 1. Op 12 by BFO’s Antonia Bodo [violin]. Noemi Molnar[violin], Csaba Galfi[viola] and Lajos Dvorak [cello].

Consul general Kumin also detailed the 10-year long struggle to put up a memorial to the ’56 Revolution heroes in New York that will finally be realized at the Joseph L. Kossuth Memorial at 130th Street and Riverside Drive.

The evening concluded with a savory Hungarian buffet featuring irresistible pastries and salads.