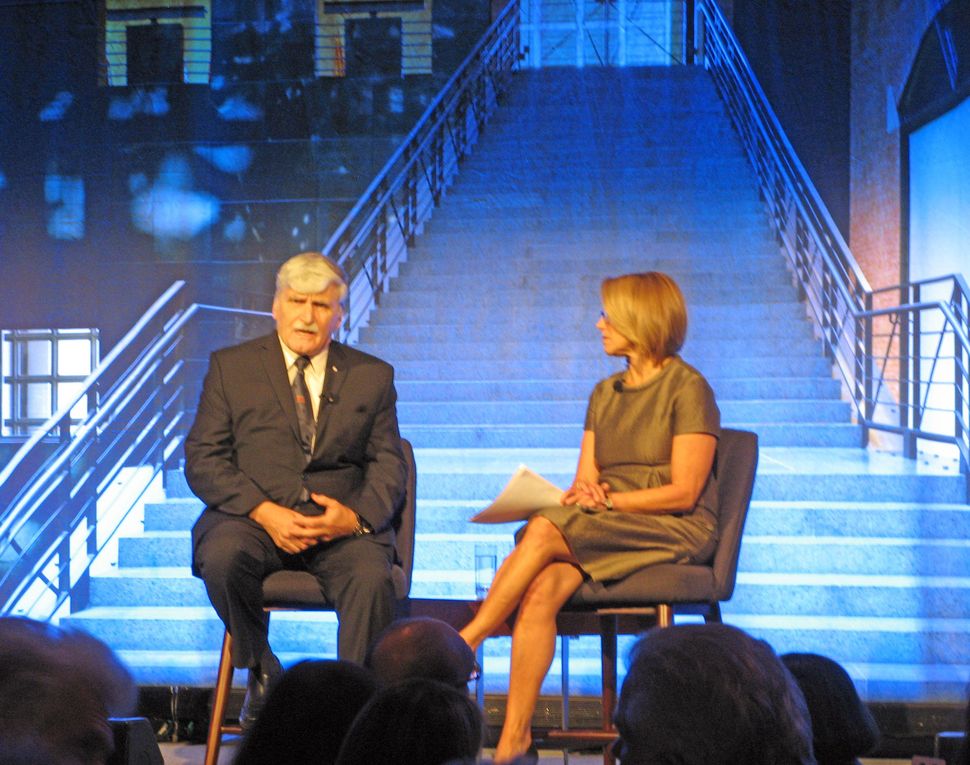 The United States Holocaust Memorial Museum’s Annual New York Tribute Dinner at Cipriani 42nd Street on November 7th showcased a Q & A between Elie Wiesel Award recipient Canadian Lt.-Gen. Romeo Dallaire (Ret) and Katie Couric. Dallaire who commanded the United Nations Peacekeeping Mission in Rwanda prior to— and during— the 1994 genocide was honored “for exceptional moral and physical courage for his attempt to stop the Rwandan genocide.”

Museum chairman Tom Bernstein offered a moving tribute to Elie Wiesel and expounded on the museum’s groundbreaking travels to Burma, Zimbabwe and Iraq—“areas identified by the Museum’s early warning system as being at greatest risk for new atrocities.” As leader of the Museum’s delegation to Rwanda to commemorate the 20th anniversary of the genocide, Bernstein said: “We were struck not only by the horror, but the inescapable truth that—like the Holocaust—it was preventable!”

Gen. Dallaire compared his experiences as akin to ”going back to Hell…letting the devil take over a magnificent country and permitting the slaughter of a million people…plus four million displaced and 500,000 who were injured…. We saw more than 350,000 children under fifteen slaughtered and we had about 500,000 orphans in a country that didn’t even have orphans as part of their culture!” And those who slaughtered 800,000 human beings in over eight months was a militia of 14-15-16-year olds. His voice breaking at times, Dallaire said: “We served humanity” yet during the Hague Conference on the 20th Anniversary of the Genocide he accused “behind-the-scenes nations—“the French, the British, the Americans” of “missing the opportunity…[during] those 100 days some lied… blamed the others…The Americans came clean…’we didn’t want to go there, we just had Mogadishu’…and there was no way the Pentagon was going to send us back in because it wasn’t in our self interest’—-a presidential directive.”

Of his own 20 plus years’ PTSD (Post Traumatic Stress Disorder) life: “I got into booze, four suicide attempts…I have a psychiatrist who gives me pills not to dream at night and a psychologist who wants [those] dreams so she can help me…. I can’t go to a grocery store because the opulence of the odors and colors of fruits and vegetables literally paralyze me as I “see” distribution points when we were feeding them hard cow corn coming from Canada and the U.S. and after the feeding frenzy the bodies…. like Holocaust survivors…. There are mornings when I wake up for a few nano seconds and I’m right back in Kigali smelling the burning bodies, hearing the screaming…It is as real [now] as it was then.”

Museum Director Sara Bloomfield touted the Museum’s upcoming 25th anniversary in 2018 “its power and the role it must play in a rapidly changing world that seems to lack a strong moral compass just when it needs one more than ever.” She touted “an upcoming exhibition on America and the Holocaust- a topic most appropriate for a museum situated in the capital of the world’s most powerful country, blocks from the president and Congress. “Why in spite of all that we knew we failed to do more to save the Jews. Visitors will learn some startling things—that America’s military was 17th in the world at the beginning of WWII! That America had it own Nazi Party…and an ardent anti-Nazi was none other than Theodor Seuss— better known as Dr. Seuss. That even Nathan Straus, son of the owner of Macy’s and himself an official in the Roosevelt Administration was unable to overcome American immigration hurdles to get the family of his friend Otto Frank, father of Anne, into the U.S.”

Dinner honoree Alan Lazowski— son of Holocaust survivors from Poland who is chairman and CEO of LAZ Parking—the third largest parking company in the United States and a recipient of the NAACP Civil Rights Award, the Anti-Defamation League’s Torch of Liberty Award was— in addition to his large extended family— applauded by one of the largest young adults contingents to attend a Museum event. During my dinner chat with General Dallaire, I indulged in a bit of Canadian “geography”— I told him that as now the only survivor of an extended family of over 200 souls—when I arrived in Vancouver in 1941 I was informed that I was the only and youngest [Jewish] refugee child admitted to Canada at the time. Reflecting on his PSTD episodes, I shared a rarely articulated memory— that during the war years in Montreal—whenever I heard a propeller plane overhead, the visceral memory of the bombing of Warsaw sent me diving under a table or desk.