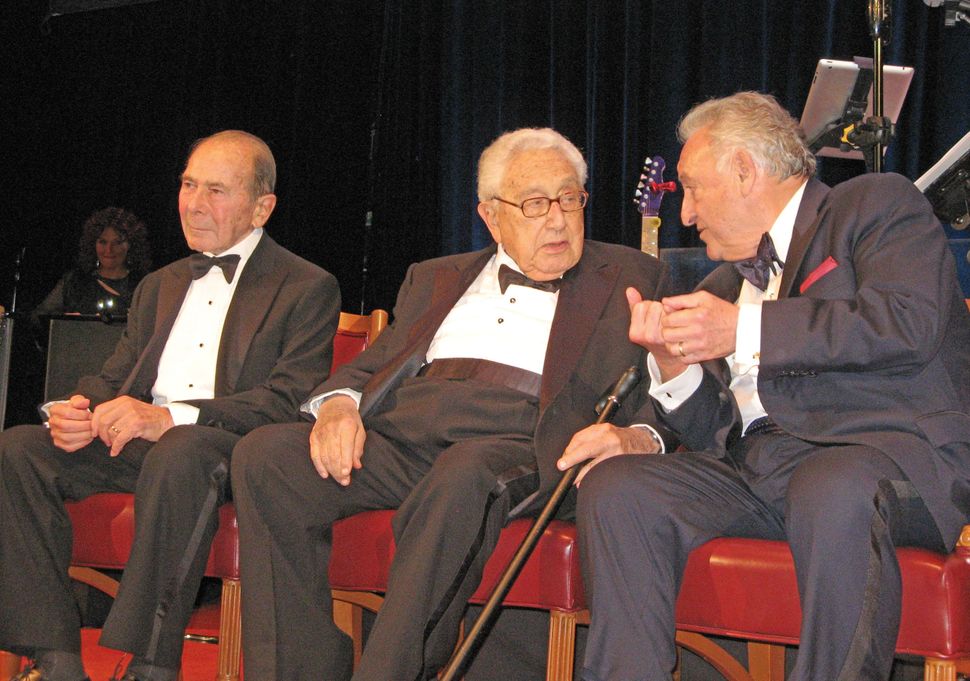 Jeffrey Maurer—Board of Trustees Chairman of the Hebrew Home at Riverdale— welcomed the more than 500 black tie: “Almost a century ago my great-grandparents along with many other families helped found the Hebrew Home at Riverdale [newly dubbed River Spring Health] to provide shelter and a safe place for older immigrants. Sixty years ago Jacob Reingold joined the Hebrew Home and became its guiding light [and] today his son Dan Reingold is our guiding light [of what is] the gold standard for health care for older adults…. We have achieved our goal—$100 million raised to enhance the quality of life programs for older adults which includes therapeutic programs, music, arts, aquatic and pet therapy programs….”

Dooree Webb, a nurse’s aide at Hebrew home for 27 years— as was her mother for 30 years— said “I know them as loving sons…I had the pleasure of [caring for] each of their mothers.” Ms. Webb recalled caring for “Mrs. K”—[Kissinger’s mother] “who always spoke lovingly of her son and held the Bible when her son was sworn in at his post [as U.S. Secretary of State]…Dr. K always took time out to see his mom on Friday night and Saturday dinner— no matter what the world events he was involved in.” She said: “Mr. Weil’s mother always came first no matter what his business schedule.”

With honorees Kissinger, Weill and Greenberg seated on stage, Kissinger —who’d been a keynote speaker at the Home for 30 years—thanked the Home “for looking after my mother for the last decade of her life. An extraordinary lady, she had gone through the inflation in Germany, the advent of Hitler through the Nazi period, the Holocaust, emigration and living in this country…. [When] some of my grandchildren complain about how difficult life is in college these days…the words I used are potentially offensive! [Laughter], I tell them the story of my mother and what she went through. She really did not want to live in an old age home…So, they made it possible for her to live here a few weeks at a time.”

Sanford Weill—Now chairman emeritus of Weill Cornell Medicine and former chairman of Carnegie Hall— who with his wife of 61 years Joan received the 2009 Carnegie Medal for Philanthropy and whose name now graces a Hebrew Home building informed: “My mother had bad Alzheimer’s and her caretaker did not take care of her…. I called up “Hank” [Greenberg] who was then in China and he said; ‘Go get her! We’ll have her in Hebrew Home tomorrow!’”

Having covered Hebrew Home galas for nearly three decades, a few memories are standouts: At the October 2, 1994 Gala then Honoree Beverly Sills spoke at length about her mother Shirley Silverstein, then a Hebrew Home resident. At the 1995 dinner Kissinger delivered a long convoluted recitative of that era’s Middle-East events then finished off with: “Now I will go down to my mother Paula [who was sitting ringside at a time] and she will tell me everything I got wrong!”

At the October 19, 1997 gala—Kissisnger’s 12th year as keynote speaker— he mused;” Jewish audiences feel cheated if you tell them that bad things are not as desperate as they appear to be. Somehow predictions of doom excite them.” As we were leaving the dinner, an elegant senior guest whispered to her companion: “Do you think they take advance reservations?”