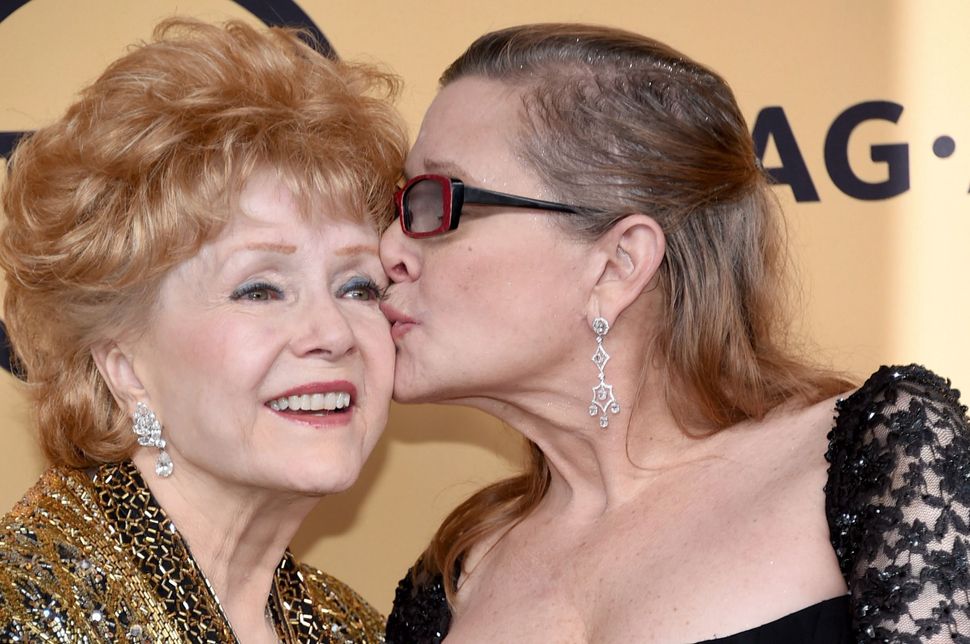 Film icon Debbie Reynolds died on Wednesday, just one day after her daughter Carrie Fisher passed away. She was 84.

TMZ broke the news, reporting that Reynolds was rushed to the hospital around 1pm after suffering from a stroke.

The actress had posted a Facebook status just yesterday, thanking fans for their condolences after the loss of her “beloved and amazing daughter.”

“I am grateful for your thoughts and prayers that are now guiding her to her next stop,” Reynolds wrote. “Love Carries Mother.”

Reynolds hit it big with the 1952 smash hit “Singin’ in the Rain.” She was only 19 at the time, and kept right up with co-star Gene Kelly, despite never having learned to dance professionally before. Later, she earned an Academy Award nod for her role in the musical “The Unsinkable Molly Brown.”

Reynolds continued to shine on the big and small screen well into her 80’s, playing Grace’s mom on “Will and Grace,” and lending her voice to “Family Guy.” She was also the inspiration for Fisher’s semi-autographical book “Postcards from the Edge,” which chronicled the ups and downs of a mother and daughter relationship.

Reynolds’ son Todd told ABC Eyewitness News that his mother had said that she missed her daughter and wanted to be with her before she suffered the stroke.

Now, he thinks that she may have gotten her wish.