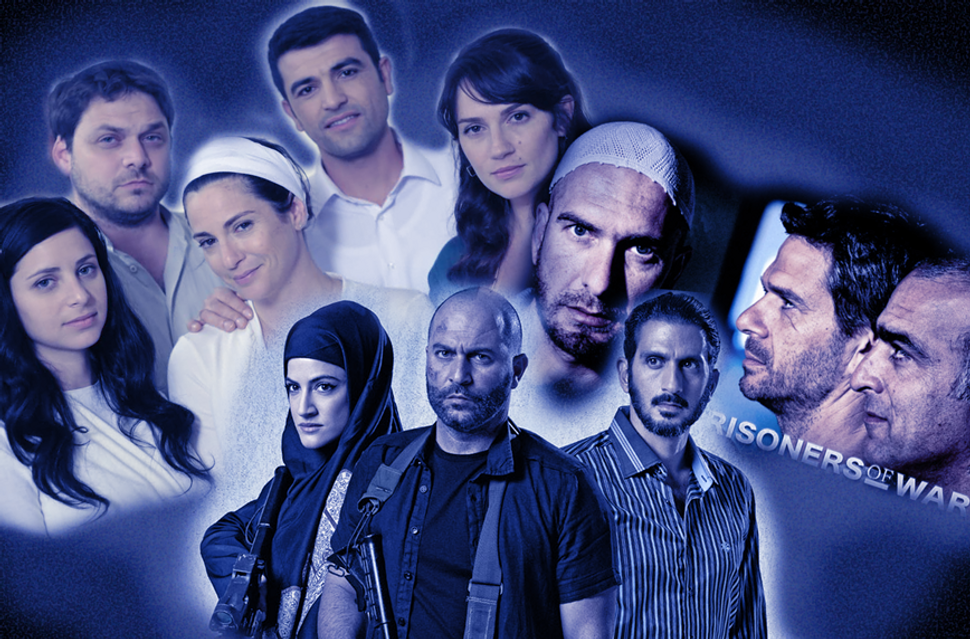 (JTA) — As the folks on the next season of “Game of Thrones” might say, “Winter is here.”

That means it’s time to get under the covers and engage in the national pastime of binge-watching TV shows. Since Netflix pioneered the streaming model in the late 2000s, other streaming services have been popping up regularly, like Hulu and Amazon Prime, with relatively affordable streaming subscriptions and lots of viewing options.

There’s something really comforting about putting on a good show whenever you want and just relaxing — or you may want to obsessively consume an entire series in one sitting.

If you’ve already worked your way through HBO Go’s offerings and seen every Netflix Original, consider an offering from the Jewish state — Israeli TV has improved markedly over the years. Though Israel may be small in size, it has plenty of fodder for great TV: wars, terrorism, religious tensions.

These six shows draw on the inherent drama that just comes with being Israeli. Some are funny, some are painfully suspenseful, some are even terrifying — but they’re all worth watching.

“Fauda” means “chaos” in Arabic — and that’s precisely what the series depicts. The show is partly based on the Israeli army experiences of creator and star Lior Raz serving in the Duvdevan Unit, which is famous for its undercover operations. The show’s main character rejoins his old unit in an effort to capture a notorious terrorist. As he goes deep undercover and the operation progresses, reality gets muddier and it becomes hard to differentiate the hero and the villain. Jacob Kaplan of Jewniverse wrote that it is the Israeli equivalent of “The Wire.” I tend to agree.

“Hostages,” or “Bnei Aruba” in Hebrew, generated a great deal of buzz before it even came out. In fact, an American adaptation of the show came out three weeks before the original Israeli show premiered. Despite its all-star cast (Toni Colette, Dylan McDermott and Tate Donovan), CBS canceled “Hostages” after one season. The original Israeli series — an international success — stars Ayelet Zurer as a successful surgeon, wife and mother of two who is about to get the gig of a lifetime: She is scheduled to operate on the Israeli prime minister. However, the night before the procedure, masked men break into her home and take her family hostage. The only thing they want is to make sure the prime minister does not survive his operation. This is a melodramatic nail-biter, with stunning performances from the entire cast. “Hostages” was made for a binge session — you’re going to have a hard time taking your eyes away.

“Mossad 101,” or “Ha’Midrasha,” is also about an intelligence unit — but it’s not what you’d expect. I suppose it is meant to be an action drama, but there’s something delightfully ridiculous about it — think “Quantico” meets “Police Academy.” The series features some of the handsomest Israeli actors around, including Aki Avni, Yehuda Levi, Itai Tiran and Omer Barnea — so if good-looking guys make a show for you, there’s that. And if laughter is the way to your heart, “Mossad 101” also stars one of Israel’s best comedians, Hana Laszlo, as well as the legendary Israeli actor and singer Yehoram Gaon. The show is about an unorthodox (and fictional) training course for Mossad agents. The course starts with 13 trainees, including one with MS and some immigrants from countries like Iran and Brazil, along with the wife of an assassinated Mossad agent. Looking for an oddball show? Try this.

Considered by some an Orthodox version of “Friends,” this series revolves around the lives of a group of single religious men and women living in Jerusalem. “Srugim” is a frank, moving and sometimes hilarious look into the dating lives of young religious people in Israel, with all of its challenges and pressures. It broaches a breadth of topics, from losing faith to divorce to feminism and even homosexuality. All three seasons are on Amazon Prime, so get cozy and settle in with this one.

“Mekimi” is a fascinating show based on an autobiographical story of the same title written by Noa Yaron-Dayan, a former TV and radio personality who joined the Breslov Hasidic sect. In the series, Alma is a young radio and TV star who feels disconnected from her wildly successful life surrounded by artists and creatives. She meets Ben (played by the Israeli singer Muki) when he moves into her shared apartment and falls for him. Ben, a film student and surfer, seems lost. On a trip to the Sinai with their friend Brener, a fellow wild surfer who is turning religious, Brener gives Ben a book by Rabbi Nachman of Breslov. So begins Ben’s love affair with religion, which at first tears him and Alma apart, then brings them back together. This short series is incredibly moving and unique — give it your undivided attention.

How can one write about Israeli TV shows without bringing up this one? “Prisoner of War” (“Hatufim,” in Hebrew) is the original Israeli TV series that Showtime’s wildly successful “Homeland” is based on. The series follows the life of two captured Israeli soldiers who are returned to Israel after 17 years in captivity in Lebanon along with the remains of a third soldier who was captured with them. “Prisoner of War” chronicles their attempts to readjust and reintegrate into Israeli society and deal with the trauma of captivity. But after a military psychiatrist finds discrepancies in the two soldier’s stories, an investigation is launched — and that’s when things get really interesting. In many ways, the series is quite different from its American counterpart. There is no strong female protagonist a la Claire Danes; instead, the show deals with a sort of broken macho pride that comes with being captured and having to reintegrate. The cultural differences between the U.S. and Israel — where prisoners of war have a more prominent place in society — give the original version a much different feel. Nonetheless, “Prisoner of War” is just as excellent as the American version — maybe even better.