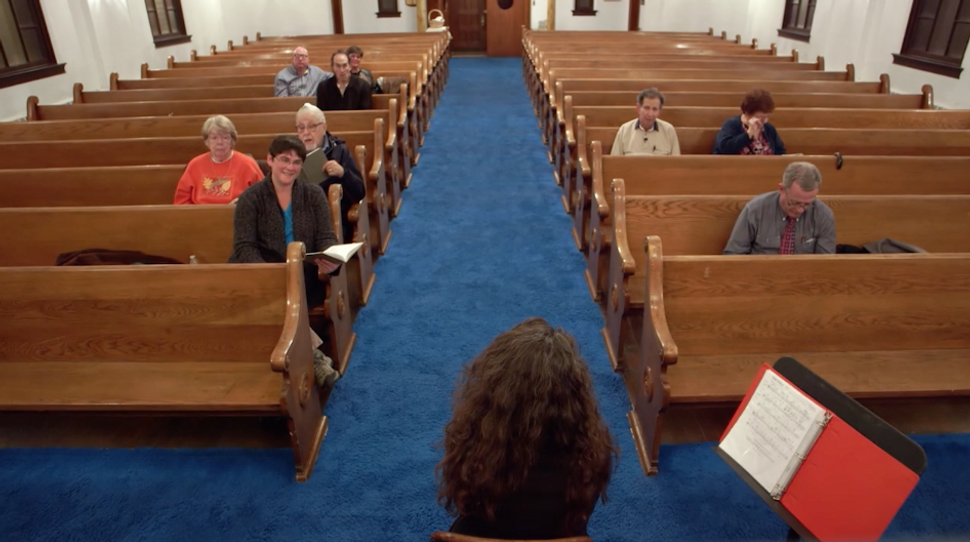 Image by There are Jews Here

Early on in the new documentary “There Are Jews Here,” Mickey Radman introduces himself as one of the last Jewish residents in Latrobe, PA.

At 82-years-old, he quips that he’s considered the youngest of the town’s tiny Jewish community — a tight knit group of ten people, in a population of 8,195.

The group is so small, he notes, that if anyone skips out on services they won’t have enough men for a minyan.

“We understand that our time is relatively short,” Radman says. “There are no Jews moving to the neighborhood.”

Latrobe is just one of four populations explored by the film’s director Brad Lichtenstein, who set out to capture the disappearing landscape of Jewish communities across small towns and cities in America.

Along the way, he meets a diverse group of characters, each struggling with the same, seemingly hopeless set of obstacles that go hand in hand with a dwindling congregation.

In Laredo, TX, married couple Uri and Susie are torn between staying in their hometown or moving to a bigger city that could better support both their child’s Jewish education and Susie’s recent conversion.

Over in Butte, Montana, a congregation struggles to adapt when their only rabbi gets sick and can no longer make it in to lead services.

And in perhaps the film’s most heartbreaking storyline, there’s the closing of Latrobe’s 110-year-old synagogue.

“I was crying when we shot that scene,” Lichtenstein said in a recent phone interview. “You’re watching all the collected treasures of the shul being carted out the door and you understand the permanence of that moment.”

By that point, Lichtenstein said that the town’s congregants had already become something of an extended family to him.

“We attended synagogue with communities, we went to people’s houses for dinner, for Shabbat, for Passover,” he said. “I spent so many holidays with these families that the joke was when it was all over I finally got to have Hanukkah with my own family.”

It was during a time, he added, that he actually needed Judaism the most.

Prior to shooting, the director moved from New York, which he described as “default Jewish,” to Milwaukee, which he called “decidedly not.” He recalled teaching a class at the University of Milwaukee-Wisconsin, and one day capping the end of a joke he was telling with a Yiddish punch line.

An entire group of blank faces stared back at him.

“In some ways getting to film this movie was like coming home,” Lichtenstein said.

And for every heartbreaking day of filming he endured, there were the bright, hopeful moments as well.

In a Cinderella-esque twist, the documentary follows a congregation in Dothan, Alabama (population: 68,001, Jewish population: 143) that receives a $1M gift from a local businessman to help recruit Jews to move to their city.

Jewish families were invited to apply, and if chosen, received $50,000 and a whole lot of other major incentives — like assistance finding a job and a built-in community. Lichtenstein captures the story of one of those chosen families, as they make the big move from Los Angeles to Dothan, eager for a more intimate Jewish community.

Then there are the smaller, bittersweet moments.

For Nancy Oyer, who learned on the fly how to be a rabbi in her hometown of Butte, Montana, that means sometimes taking one for the team and being the only person singing during her mostly empty services.

It doesn’t bother her, though. She tells the filmmakers that she’s just happy to be up there.

“The best thing about living in Butte, Montana, is that you can be anything you want to be,” she says. “I get to be a rabbi.”