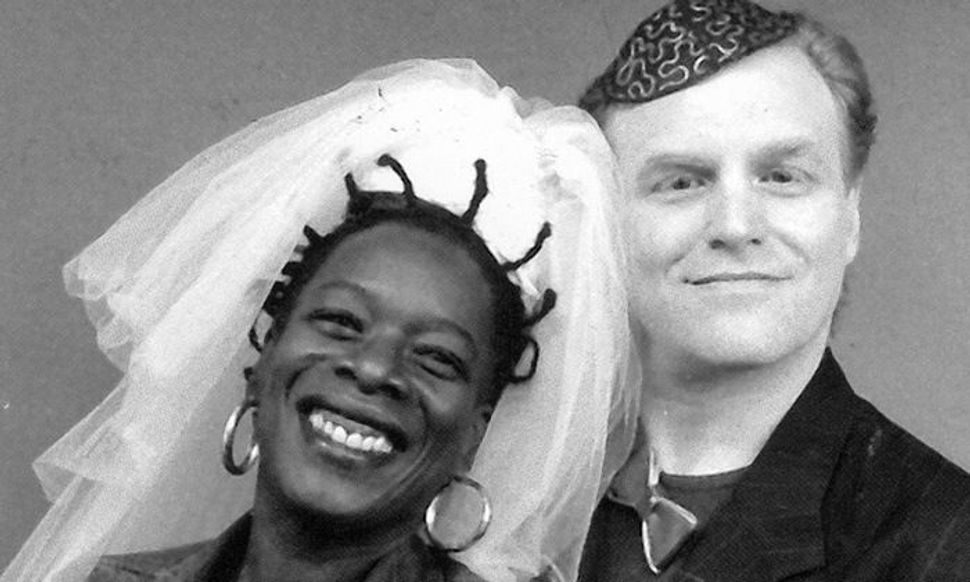 Image by The Black and The Jew Comedy Hour

She’s black, he’s Jewish and together they’re going to fix your relationship — one comedy show at a time.

For nearly 10 years, comedians and real-life couple Steve Epstein and Naimah Hassan have been holding mock workshops to educate audiences on “Black/Jew/Love” technology, a delightfully raunchy and insightful set of tools to help relationships last.

Their show, dubbed “The Black & the Jew Go Buddhist,” explores sex, marriage, race and love, all in a world that’s grounded half in theater and half in their own reality.

We chatted with Epstein and Hassan about lasting love, working together as a couple and that time they did Joan Rivers’s radio show.

Epstein: The first time we ever hung out together, just my luck, she decided that she no longer was going to give it up. She was going to change her ways and make me work for it.

Epstein: Which is just my luck. Anything my family touches… my old Jewish grandmother used to say if my family went into the funeral business, people would stop dying.

You never know how long something’s going to last. I thought I’d just go over to [her apartment] a couple of times, because it was close to where I worked. I figured I’d hit a few times. Now it’s 30 years. The comedy act for us, the fact that we struggle and go through it together, has been very powerful in our marriage.

The origins of “The Black and the Jew Comedy Hour”

Hassan: It really came out of the fact that a lot of our friends had a lot of money; they were doing really well, but their relationships were falling apart. Epstein and I lived in this tiny apartment and we were looking at what makes a relationship work. It’s obviously not about having a lot of money or space. We just started to look at areas that couples can work on and we created this mock comedy relationship show around that.

Hassan: We did Joan Rivers’s radio show. We were scheduled to be at her office at like 4:48. She had never heard of us, so we had three minutes and we were told if she didn’t like us we’d be off the air. We ended up doing the whole hour.

Epstein: She had writers on the show, which shocked us. She had two men feeding her jokes. She was willing to play with us when she thought we were funny. She appreciated it if you were funny.

Epstein: Sometimes Jewish people after the show will ask me why I don’t marry a Jewish girl. My thing is, black women really like red hair. So for some reason, I was just very attracted to black women. That’s how shallow I am.

Being real with each other

Hassan: Sometimes we give each other critiques onstage.

Epstein: When it comes to laughs, I know what’s funny. I’m a Jew from Brooklyn.