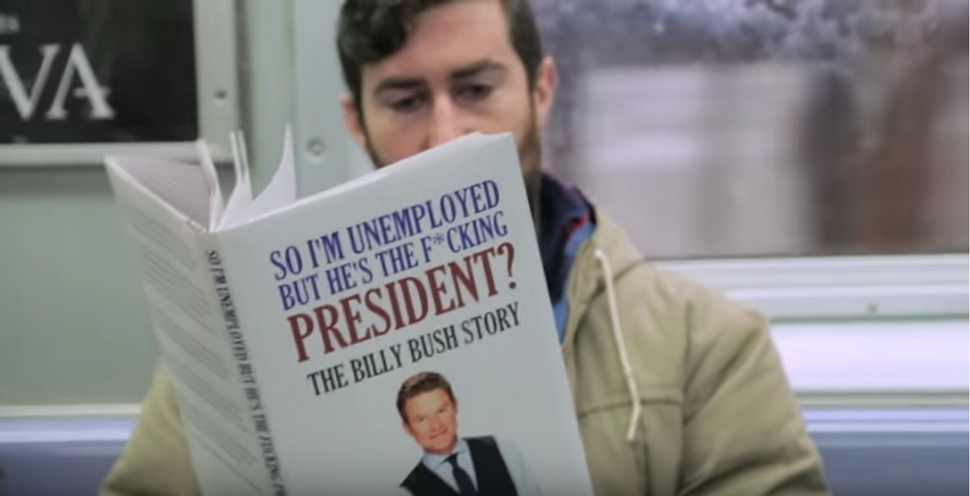 Seth Rogowsky enters the Graham Ave subway station in Brooklyn, catches the L train, and settles in with his book, “Prejudice & Prejudice” by Mike Pence. Later, he takes a deep dive into “Horton Smears a Jew!” by Steve Bannon (featuring the beloved Dr. Seuss character with payos and a yarmulke) and “Michelle Obama: In Her Own Words” by Melania Trump.

Before you pause to leap over to your local Barnes & Noble and put in a request for Bannon’s latest children’s book, we have to warn you that no, unfortunately, none of these titles are available for purchase. They’ve all been dreamt up by Rogowsky, a Jewish, New York City based comedian, who created the YouTube series turned viral phenomenon “Fake Book Covers on the Subway.”

The videos, which have racked up more than 100 million views across social media so far, are simple.

We talked to Rogowsky about conceiving the series, his parody video about aggressive Lubavitchers and a surprise encounter with Elizabeth Gilbert.

How did the idea for “Fake Books on the Subway” come about?

I originally came up with the idea almost three years ago, when I was reading a book by a friend of mine called “How To Be Black” on the train. I was thinking about how it might look a little weird to people watching me read this book. I’ve always been aware of what people read on the subway and I’m always silently judging what people are reading on the subway.

The idea sprouted in my head of coming up with really ridiculous book titles and seeing the reactions. Would people say something? Would people laugh? Would they take pictures? That was sort of the impetus.

The more practical reason was that I had a deal with Playboy to make videos for them. This was one of the ideas I pitched them and it took me a full year between pitching them and getting it approved to actually executing it because the idea of designing, and printing, and the logistics of it were too daunting for my feeble brain.

You manage to look so engrossed in what you’re reading. What book is actually underneath the covers?

I’m actually reading a very boring book, and unfortunately I had to read it every time I [filmed]. I chose it initially not thinking I’d be sitting with it for hours and hours on the subway. It’s a collection of R. Crumb illustrations, but, like, recent R. Crumb. They’re not even nasty and disgusting R. Crumb. They’re like, drawings of his grandkids and his kids.

Is it hard fighting temptation to look up and see people’s reactions?

My peripheral vision is really kicking into high gear. I can see when I’m looking down if someone is taking a phone out, or if someone is chuckling, and a few times I’m signaling to my camera person: “Hey, did you get that person? Did you get that girl in the sweater laughing?” 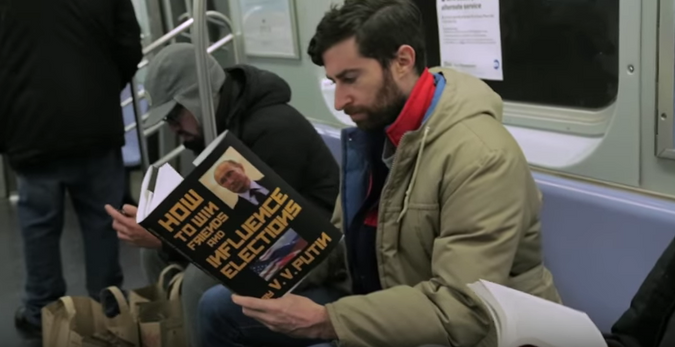 If you had to pick, which book cover are you most proud of?

Oh, man. They’re my babies. I love them all. There’s “Lean Back” by Fat Joe with Sheryl Sandberg, and the subtitles were: “Choosing to Dance, Pulling Up Pants, and The Will To Do The Rockaway.”

It happened all thanks to Twitter. Normally, it’s reserved for cyber-bullying and spreading hoaxes and feuding with Piers Morgan…but there’s actually some good to be found with Twitter. I woke up one morning last week and I had a notification from Elizabeth Gilbert that said, “Scott, I loved this. Do you have the original? I want to march with it at the Woman’s March on Saturday. We’ll trade you a donation to Planned Parenthood for it.” Yesterday, we met at her apartment lobby and she came out of the elevator holding a checkbook. I didn’t know how much it would be. She said: “How about 5,000?” 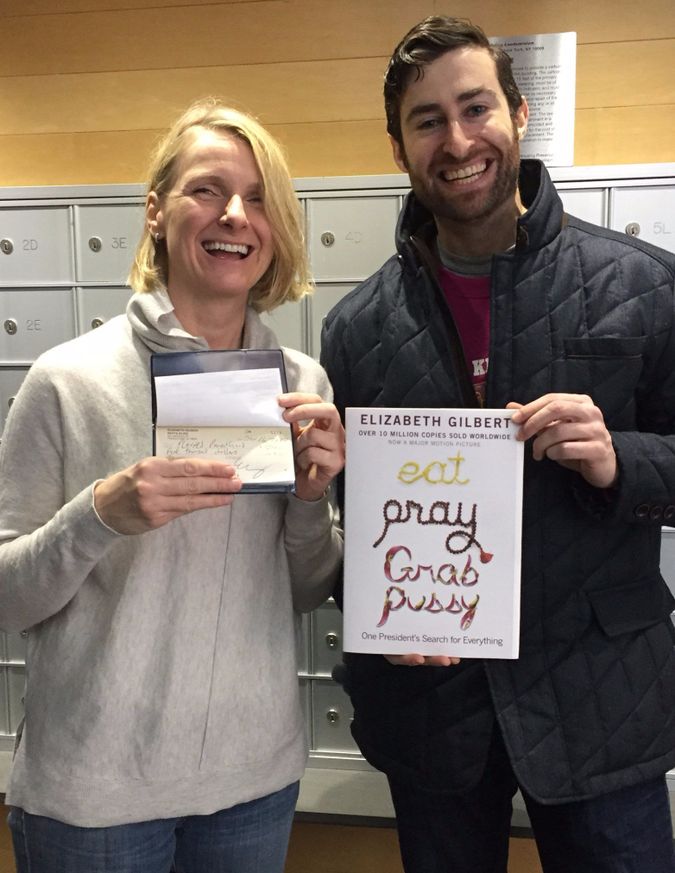 You also did a hilarious video called “10 Hours Walking Around as a Jew.” (Rogowsky shot a fictitious video of himself walking around New York City being harassed by overeager Lubavitchers demanding to know if he’s Jewish.)

That was in response to the viral street harassment video. She was walking around, recording as guys catcalled her. A few parodies started to pop up after and my brain snapped into action. I started thinking about how I could do something specific to me and my experience in New York. I happen to look very Jewish, because I am very Jewish, and my personal cat calling are the Lubavitchers, who hit me up every holiday, asking me to roll tefillin or shake the Lulav. 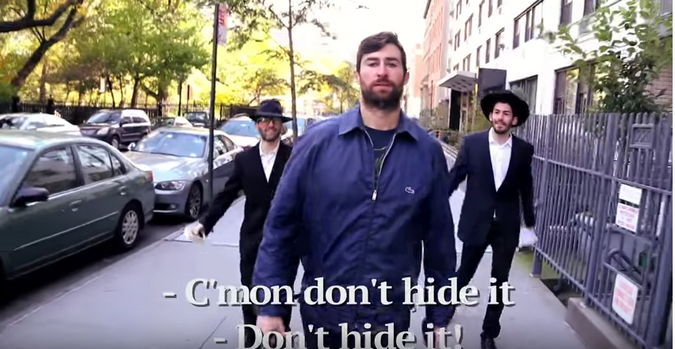 I love parody. It’s kind of unpopular to say among comedians because it’s considered cheap and disposable and easy. There’s truth to that. If you hadn’t seen the original street harassment video you wouldn’t have gotten the joke. It relies on a self-contained joke and it’s not fully original.

It’s the bad parodies that give parodies a bad name. Like, look, “Airplane” was one of my major influences as a child. “Police Squad,” the “Naked Gun” movies, those are great parodies and spoofs because they’re made by funny, smart people. Then you have these other movies coming out, like these superhero movies or “Scary Movie,” and they just kinda ruin it.

Check out Rogowsky’s most recent fake book adventure below: