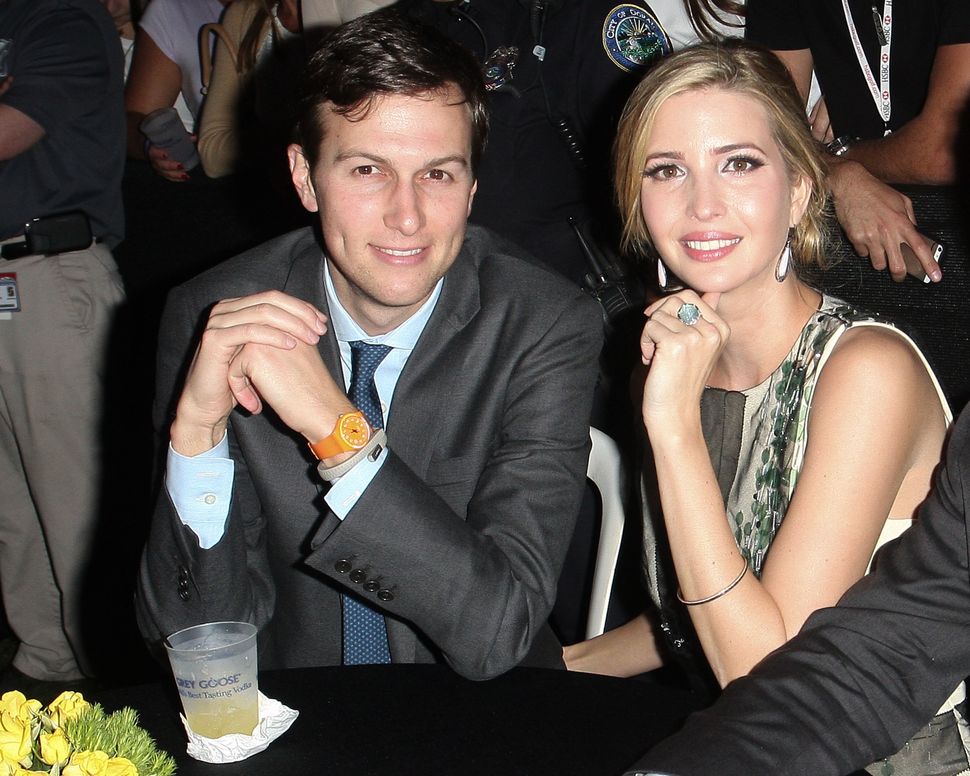 Updates to add details about Jewish law, other Sabbath observers’s experiences in politics.

Ivanka Trump and Jared Kushner have been given a free rabbinical pass to travel by car following Donald Trump’s inauguration Friday.

According to Jewish law, driving or riding in cars is prohibited on the Sabbath. But a principle in Jewish law, called pikuach nefesh, mandates that the rule can be broken only in life-threatening situations.

In an interview with Kol Barama radio, Mark Zell, chair of the Republican Party in Israel, said the couple has been granted special permission by a rabbi to use a vehicle because of “safety” concerns.

This isn’t the first time that Kushner has broken Shabbat since his father-in-law’s presidential run. After Donald Trump’s lewd audio clip was leaked, The New York Times reported that Kushner, who does not typically work on the Sabbath, met with the president-elect on a Saturday to help deal with the fallout.

Ivanka Trump described her family as “pretty observant” in a 2015 interview with Vogue magazine.

“We observe the Sabbath,” she said. “From Friday to Saturday we don’t do anything but hang out with one another… it’s an amazing thing when you’re so connected, to really sign off.”

Getting a rabbi pass actually isn’t all that uncommon for observant Jews in politics. Former White House chief of staff Jack Lew, who was known for strictly observing the Sabbath, refused to work or to pick up any phone calls from Friday to Saturday sundown. That is, until Bill Clinton couldn’t reach him — and the then-president reportedly said into the speakerphone: “I know it is the Sabbath, but this is urgent. God would understand.”

Lew consulted his rabbi, and it was decided that if the phone calls were emergency, he would not be breaking Shabbat by picking up the phone.

Then there are the politicians who make compromises.

In 2009, former Connecticut senator Joe Lieberman trekked 5 miles on a snowy Saturday afternoon to vote on health care amendments for the Senate.

“I have a responsibility to my constituents, really to my conscience, to be here on something as important as health care reform,” he told The Hill.

Should observant Jews break Shabbat if it’s not to directly save a life?

“If it would be dangerous for [Jared and Ivanka] to walk, then that’s reasonable,” Mintz said in a phone interview. “But do they really need to go to the ball? I don’t have enough information.”

Mintz did say, however, that any discussion around the couple’s decision is ultimately a real coup for Orthodoxy.

“It’s amazing that people around the world are talking about whether Ivanka and Jared are violating Shabbat,” he said. “I think it’s good that Orthodoxy is being promoted like this.”

And, he added, we should be glad that Trump and Kushner care.

“It’s good that they felt the need to ask a rabbi the question,” he said. “I hope they continue to ask these questions for the next four years.”

Thea Glassman is an associate editor at the Forward. Contact her at [email protected]