Can Shabbat Be Sexy? I Went On a Mission to Find Out. 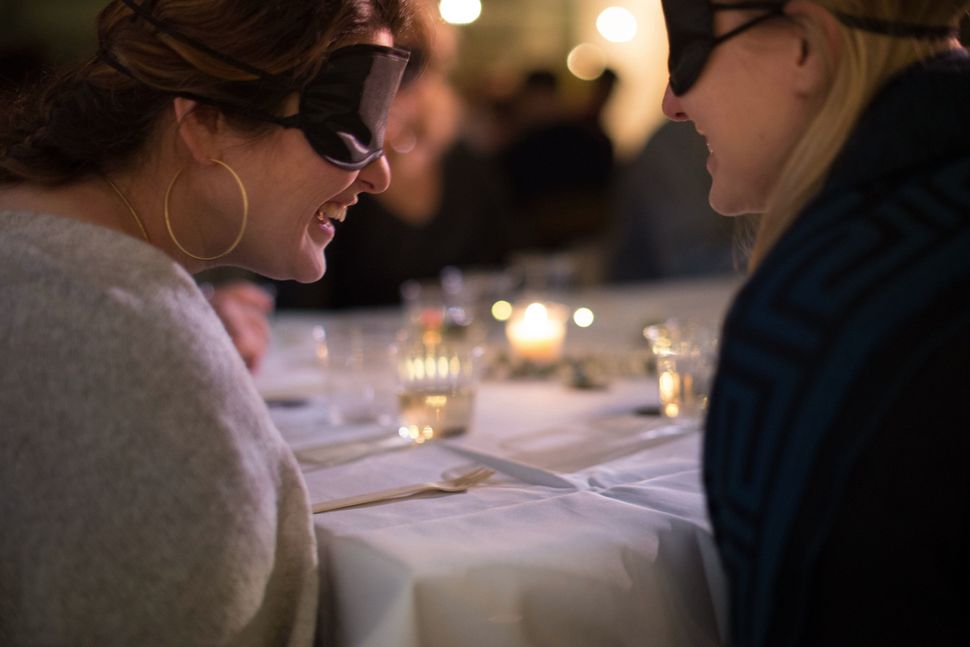 In case there were questions on the subject, let it be known that it is, in fact, difficult to eat soup while blindfolded. On the plus side, if everyone around you is blindfolded, too, you don’t have to worry about them silently decrying your marked lack of daintiness.

So went one attendee’s distinctly un-spiritual train of thought during one of seven courses at the Lost and Found Project’s December Shabbat in the Dark, produced in collaboration with the Floating Tower. The other courses were easier – challah, gefilte fish, pickled green beans, etc. – but the soup was the source of lasting dismay, exaggerated when the blindfold was removed to reveal three spilled grains of broth-soaked barley staring up from the table.

Of course, one doesn’t – usually – blindfold oneself during Shabbat dinner purely for kicks. That’s where the Lost and Found Project, a group of young New York City writers and actors functioning in partnership with the National Yiddish Theatre Folksbiene, which bills itself as producing “Cross Cultural Music Theatre,” come in.

The event, which took place in a fairy light-dotted room on the Upper West Side, featured a “sound drama” – the hosts’ term – intended to dramatize both the spiritual experience of entering Shabbat, and the cultural history of the food served. (A particularly odd exchange occurred over the soup; harking back to the days of the shtetl, the woman playing the soup’s cook repeatedly hollered, with increasing ecstasy, over the secret ingredient: fish oil.)

The drama was at moments engrossing – stumbling into the room, to sounds of mystical wonder, it was easy to feel a spiritual spark – but more often, as with the fish oil, confusing. Guests were led into the room to ecstatic whispers of “Have you seen her?” “Have you seen her?” and, just before the end of the meal, the actors exclaimed exuberantly “She is here!” It might have been, to those with some knowledge of Shabbat, easy to guess the unnamed, unexplained woman in question was the Sabbath Bride. And for those with no such knowledge, it didn’t really matter.

After all, the event appeared to be geared towards making Shabbat accessible and spiritually immediate for those, presumably, who struggle to make it so in the first place. That target audience isn’t exactly likely to be well-schooled in Sabbath lore.

So the evening suffered from a quandary of split intentions: to make Shabbat an enticing prospect for a Friday evening (it must be admitted that the soup-spilling attendee, prior to the event, joked to her companion that it should be called “Hot Shabbat”), and simultaneously engage on a spiritual level that, while meaningful, is difficult to make sexy.

And when the blindfolds were removed, the wine flowed freely, and dessert came out. The room glowed, some brave folks danced, and over slices of an orange-scented cake, two young journalists went back to a pre-Shabbat conversation about “Gilmore Girls.” It had been a nice night out, but as they left, they agreed: they were still waiting for the Sabbath Bride to truly show her face.

Can Shabbat Be Sexy? I Went On a Mission to Find Out.