An Ode To ‘Girls,’ Lena Dunham And Modern Jewish Neuroticism 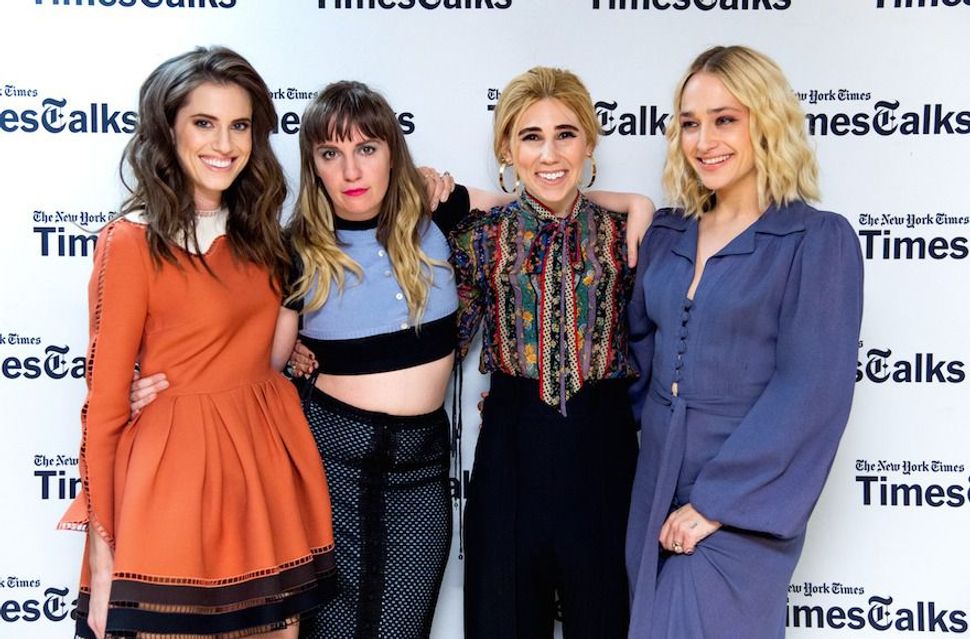 (JTA) — The HBO series “Girls” may no longer be the definitive show of the millennial generation — but as it enters its sixth and final season this week, it remains relevant in myriad ways.

“Girls” debuted in 2012 — when the Jewish creator and star Lena Dunham was just 24 — and became the kind of smash success fueled by a maelstrom of both breathless praise and scathing critiques.

The show, which focused on four young women navigating Brooklyn and the turbulence of early adulthood, took on awkward sex, bad relationships, unpaid internships and minutiae of the entry-level “creative class” in stunningly refreshing ways.

Of course, even in its brilliant early days, “Girls” was not without its flaws. The characters were achingly relevant to many young people — especially among 20-something New Yorkers like myself — but they also represented a very white, privileged sector of society. Dunham famously said, “I am a half-Jew, half WASP, and I wrote two Jews and two WASPs,” but she acknowledged the whiteness of her first season’s cast. She promptly wrote Donald Glover into a guest role in the show’s second season — the knee-jerk response was also criticized.

As the series matured and begins its final episodes Sunday, it is no longer TV’s hip, love-to-hate-it darling. Other comedies such as “Broad City” (written and starring Abbi Jacobson and Ilana Glazer, two of the Jewiest women in comedy) and “Master of None” assumed the mantle of “cool new show about young people in New York City.” (It is worth nothing that the triumph of these upstarts is due, at least in some part, to the trailblazing success of “Girls.”)

The millennial world’s gradual breakup with “Girls” may be due as much to Dunham’s off-screen antics as to the quality of the show’s writing, which gradually declined after its first season by abandoning some of its freshest themes, such as the continual struggle to pay rent in New York and the stress of uncertain relationships. Last year, Dunham was excoriated from all sides for some questionable comments she made on abortion and a black football player. The year before, she wrote a piece in the New Yorker comparing her Jewish boyfriend (Fun! guitarist Jack Antonoff) to a dog and was called anti-Semitic. She’s been labeled by some as the epitome of a “white feminist” — someone who genuinely wants to push back against society’s patriarchy but is oblivious to the broader concerns of women from different classes and races.

But it was not that long ago that Dunham was likened to Woody Allen, that other controversial pillar of Jewish humor — for good reason. A 2014 article in The New York Times Magazine first made the explicit connection, which was hotly debated and widely praised.

“[T]he artist to whom [Dunham is] most analogous is [Woody] Allen … With her awkward screen presence, her preoccupation with sex, her frank exploration of her own neuroses and, above all, her willingness to play the part of herself almost to the point of caricature, Dunham has ensured that her work be guided by her own persona, which in turn has been shaped by the twin forces of profound anxiety and exhaustive (though, again like Allen, somewhat roving and undisciplined) intellectual engagement. Plus, of course, extensive therapy.”

The comparison is eerily accurate. True, Dunham’s show may be set in an era defined by a technology-induced ennui that the Allen of the ’60s and ’70s couldn’t have imagined — see the casual-at-first relations between Dunham’s hapless character Hannah and her bizarre love interest, Adam. (Those episodes, which aired well before the rise of dating apps, still feel like an accurate portrayal of a Tinder relationship today). There may not be as many Jewish references in “Girls” as there are in “Annie Hall” or “Crimes and Misdemeanors,” though there were some notable Jewish moments in the early episodes, such as when Shoshanna Shapiro hooks up with a guy she knew from Camp Ramah.

Plus, while both Dunham and Allen are creatures of New York, the realms inhabited by their characters — Greenpoint, Brooklyn, and the Upper East Side, respectively — may as well be worlds apart.

But on a fundamental level, the core motif of “Girls” is unrelenting discomfort — whether it’s unease with the shape of Dunham’s body (which she frequently bares), awkward encounters at work or the anxieties amassed in the quest to live a fulfilling, artistic life. Who else, if not Dunham, would craft a character that frets about the “stuff” that gets up “around the sides of condoms,” ask a widow about a book deal at a funeral or turn a nearly debilitating episode of OCD into dark humor?

“Girls” has been hilarious psychosocial commentary, and it builds on Allen’s work — fortunately from the perspective of a young woman. (Even the most hardcore Allen fans can get tired of his trope of an older man fawning over younger, more attractive woman). Dunham’s oeuvre is also a welcome break from the frat-bro and stoner humor common in the work of other modern Jewish comics, such as Adam Sandler or Seth Rogen.

In the now iconic first episode of “Girls,” Hannah tells her parents that she could be the voice of her generation — but she quickly hedges and says she is “at least a voice of a generation.” That’s a pretty good description of Dunham’s work: unmistakably of our time and yet, in a sense, from another era.

Ultimately, watching “Girls” shouldn’t just be comedic enjoyment for American Jews. It’s also a self-reflexive exercise that reminds us to be mindful of our neuroses, even if we will never be able to fully bury them. The rare, funny honesty depicted in “Girls” — now in short supply on TV, where violent dramas reign supreme — will be sorely missed.

An Ode To ‘Girls,’ Lena Dunham And Modern Jewish Neuroticism