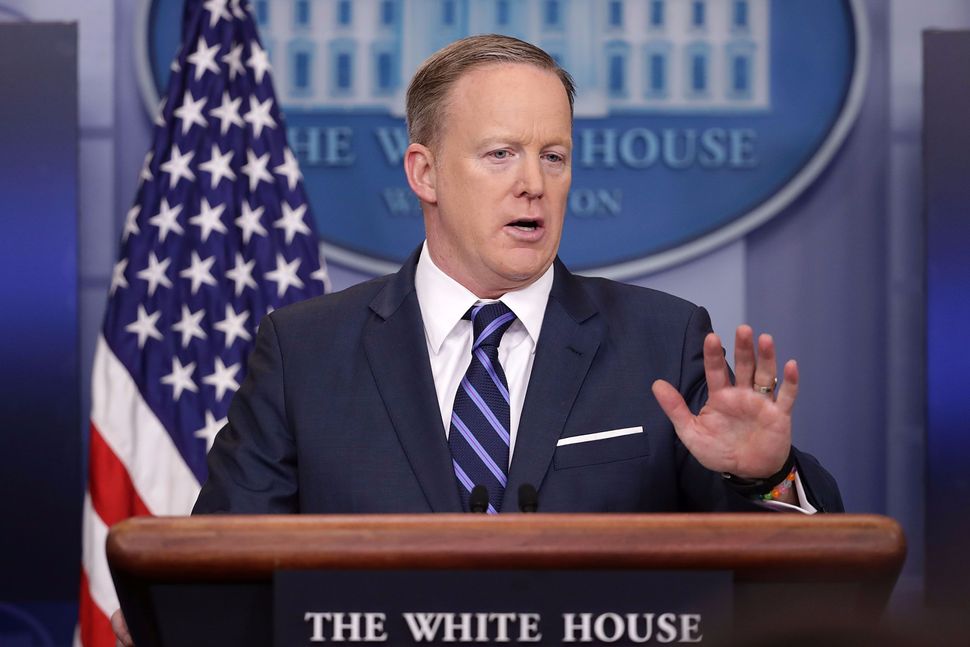 Sean Spicer is currently being ripped apart for statements he made while comparing Syrian President Bashar al-Assad to Adolf Hitler.

“You had someone as despicable as Hitler who didn’t even sink to using chemical weapons,” Spicer said during Tuesday’s press conference.

When reporters reminded him that Hitler did in fact use gas to kill millions during the Holocaust, the press secretary tried to backpedal — and then dug an even deeper hole.

“He was not using the gas on his own people the same way that Assad is doing,” Spicer said. “He brought them into the Holocaust center, I understand that. But I’m saying in the way Assad used them, where he went into towns, dropped them down to innocent — into the middle of towns. It was brought — the use of it, I appreciate the clarification. That was not the intent.”

Many celebrities are speaking out against Spicer’s comment, dubbing it a “s—t show,” and calling for the press secretary to step down.

Here’s just a few of those reactions.

Is a “holocaust center” a dejewing center? Like when Mike Pence can turn you un-gay? What a shit-show.

Sean Spicer should be fired for saying Hitler did not use chemical weapons on “his own people.” You mean 6 million Jews don’t count?

This is not a smart man. I hope we can at least all agree on that. https://t.co/vuukdvRm4P

Spokesperson for the president of the US must understand the unprecedented atrocity of the Holocaust. His ignorance-unacceptable #FireSpicer https://t.co/y7XSTJDxUa

STATEMENT from Anne Frank Center re: Spicer denying gas use in Holocaust. #FireSpicer. Please use this hashtag. pic.twitter.com/T6oEnkXnU0

FYI: All Fleetwood Mac shows at the Holocaust Center are SOLD OUT!

Someone please send Sean Spicer a Holocaust coloring book or some shit. Something more his level and whatnot.

How sad and offensive at the same time when an administration spokesperson doesn’t know facts related to the Holocaust. https://t.co/3n9tyMgXyM

“Not even Hitler used chemical weapons” – Sean Spicer, who thinks Zyklon B was aromatherapy.