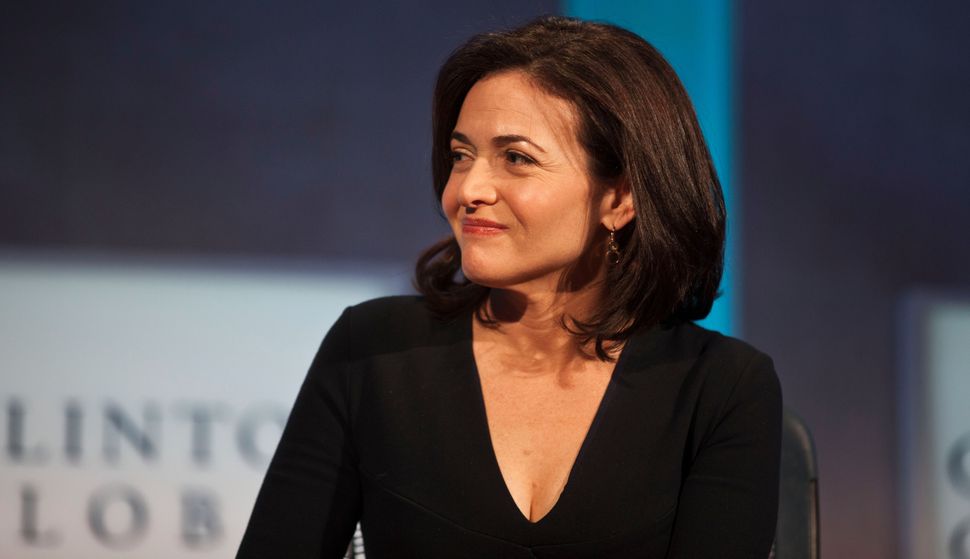 Sheryl Sandberg, famously controversial for inventing the concept “lean in” has, at 47, become the expert of another topic: grief.

Sandberg, COO of Facebook, suffered a crushing loss when her husband Dave Goldberg collapsed on vacation in May 2015 and died shortly after of heart failure. Scenes from Sandberg’s family’s horror — Goldberg collapsed on a treadmill, Sandberg clutching her husband’s hand in a slow-moving ambulance, untimely death up against the idyllic background of a Mexican beach vacation — have been seared in the public imagination not because of prying paparazzi but through Sandberg’s own efforts.

With remarkable will and humility, Sandberg has turned herself into a poster woman for living through grief. On the last day of the period of shloshim (30 days of grieving in Jewish tradition) for her husband, Sandberg took to Facebook to parse through her pain and share what she has learned. Now, she has expanded her heartache into a larger venture: a new book with psychologist Adam Grant called “Option B: Facing Adversity, Building Resilience, and Finding Joy” which is being debuted alongside a nonprofit by the same name.

Sandberg graces the cover of Time Magazine this week to discuss loss, parenting and changing the “lean in” rules. Here are some of the best takeaways:

Sandberg’s rabbi (who she doesn’t refer to by name but we assume is Rabbi Nat Ezray of Congregation Beth Jacob in Redwood, California, who performed Goldberg’s funeral service) weighs in on Sandberg’s new venture. The book has two purposes: practical advice for people who have been struck by grief, and equally helpful words for the friends and families of mourners. Being supportive involves encouraging grieving loved ones to “lean in to the suck” says Sandberg’s rabbi.

It’s OK To Cry In Meetings — Sheryl Did

She also rambled, confused a colleague’s name, and fell asleep. After receiving ample criticism for her “Lean In” arguments, which some argued suggested that the responsibility to end sexism lies with women taking on more work, Sandberg was radically, publicly vulnerable after her loss. She says her confidence was the first to go. “It just kind of crumbled in every area.” she told Time. “I didn’t feel like I could do my job.” She added that she doubted her ability to parent her own children.

Mark Zuckerberg “carried” her through her pain

Facebook CEO Mark Zuckerberg says he did not know how to respond to Sandberg’s open grief. “You know, there’s this whole question of, are you reopening a wound or something?” he reflected. But when Sandberg flailed at work, Zuckerberg supported her need for confidence as well as her need for space. She says on her first day back at work he invited her to take as much time off as she needs, and then added, “Actually I’m really glad you were here today. You made two really good points — here’s what they were.” Zuckerberg gifted her a chain to wear her husband’s ring around her neck, which she fused to a chain given by another friend. She wears it daily. “Mark’s one of the people who really carried me,” she says. “I believe even more I work with the greatest person in the world.”

Some of Zuckerberg’s leadership informed “Option B.” Now, when Sandberg is faced with assigning work to employees who are in crisis she doesn’t immediately lighten their load. Instead, she checks in with them about how much responsibility feels right to them. This is one of the book’s main points — don’t avoid mourners, unless they explicitly ask you to. Don’t stay silent just because you don’t have the perfect comment. Rather than asking them how they are, say, “How are you doing today?” Sandberg’s primer in loss comes from an over 100,000 word journal she used to process immediately following her husband’s death.

Sandberg Changed One of Her Husband’s Parenting Rules

Part of moving forward from her family’s loss meant redefining herself as a parent. Goldberg didn’t let the couple’s two children, both pre-teens, have sleepovers, citing the need for full nights of sleep. Sandberg allows sleepovers. In honor of Goldberg’s love of the poker she also has family friend Chamath Palihapitiya, who has competed in the World Series of Poker championships, teaching both Sandberg kids the game.

Telling her Children was the Hardest Thing

It is difficult even to read about Sandberg’s first task as a single mother. But her poignancy and honesty in sharing the experience demands attention: “Nothing has come close to the pain of this moment”, she writes in her new book. “Even now when my mind wanders back, I shake and my throat constricts.”

Her Loss Has Inspired Her to Demand Change

Sandberg is livid about the number of single mothers (1/3 of the 10 million total in America) who live in poverty. She says she has become “so outspoken about public policy” and is working to push change in laws about maternity leave, paternity leave, and fair wages. She worked with Facebook to add bereavement and sickness leave policies in the hopes that other companies will follow suit. And her work on equality and fairness is just beginning. “I’m in a different place”, she says.