Could “Friends! The Musical” BE More Jewish? Yes, Here Are 7 Ways 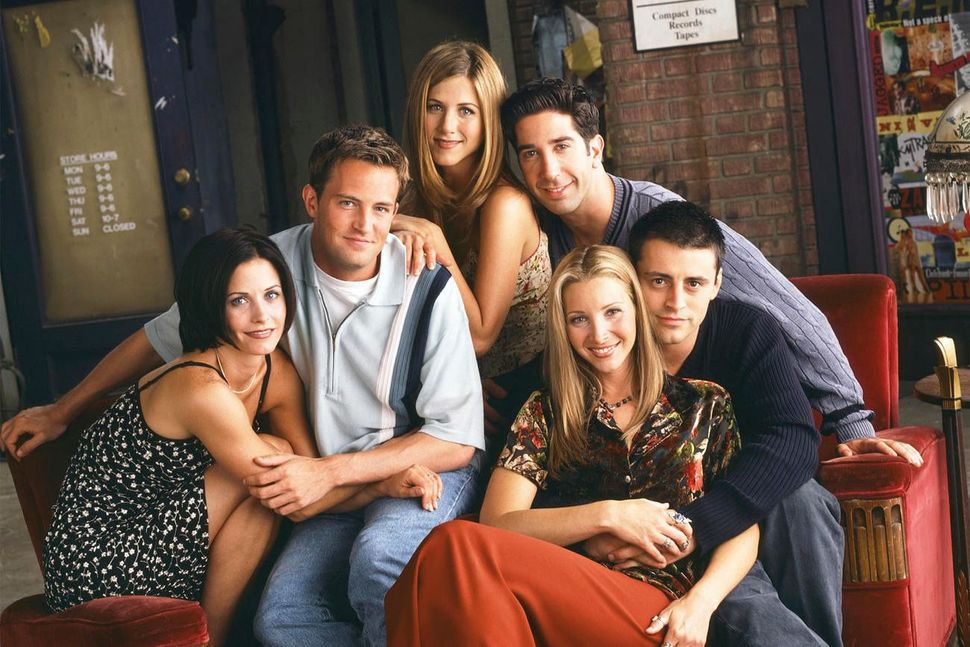 Image by The WB

When the cultural icon “Friends” arrived on Netflix in its full, 10 season glory, 20 and 30-somethings everyone threw down their saplings and ran to greet it like a shiny-haired messiah.

Marathon-watchings ensued — no longer were we Friend-less and alone, or forced to pull scratched DVDs from their box sets — we were reunited with smelly cat, the purple door, Rachel’s hair annnnnd Joey’s carefree approach to sexual assault, Chandler’s deep well of homophobia, every single character’s abiding disgust for overweight people…you know, all the classics that make Friends more of a home than a TV show!

Like discovering that your tooth fairy is really your dad stumbling around in sweatpants, the Netflix “Friends” revival brought on a crisis in young-ish people everywhere, begging the question: “Can woke people still enjoy ‘Friends’?”

It’s still a story about kindhearted people trying to stay close to each other in a confusing world. It was created by two Jews, Marta Kauffman and David Crane (who went to Brandies, for hashem’s sake!) so frankly, they owe us something better.

And finally, “Friends” has a chance for true redemption.

The TV show is being adapted into a musical by composers Bob and Tobly McSmith, and will play in the East Village this Fall. The duo have already put on parody musicals of “Saved by the Bell”, “Full House”, and “Beverley Hills, 90210” — so can we rest assured that “Friends” is in good hands with these two hip, nostalgic musical masterminds?

Well. They have released some titles for original songs that will be in the show, including, “Hey Ugly Naked Guy Who Lives Across the Street”, “The Ballad of Fat Monica”, and “I’m Gonna Hump U”, sung by Marcel, who you may recall is a literal monkey.

How does the old saying go? Friends help “Friends” not make offensive, crappy musicals. Here are the problems with “Friends” and our solutions for how “Friends! The Musical” can be Jewish and cooler than ever.

Vulture has graciously looked into this major debate of our times and the answer is definitive: Rachel Green, Long Island native, granddaughter of “Bubbe Spuds”, written by Jeff Greenstein, is 100% Jewish. The mystery and revelation of Rachel’s religious identity would make a great dream-ballet. Get on it, McSmiths.

Oh, Janice Litman Goralnik (née Hosenstein), you were so much more than the world could ever understand. Janice (played by Maggie Wheeler) is beautiful and successful, but you wouldn’t notice that because her sole purpose throughout ten seasons is to be as annoying as humanly possible. The main characters laugh at Janice’s voice, laugh, face, marriages, and pursuit of happiness. “Friends! The Musical” writers, please give us a Janice who is more than a walking nasal blockage. Or at least give her a dance number.

Problem: Every single person on “Friends” is white (there are almost no exceptions) Solution: Don’t cast all the roles as white people!

This is fairly straightforward. Do you really think audiences can’t experience nostalgia if it involves racial diversity? Judging from clips of the same team’s “Full House” musical, the actors don’t look much like the original characters, so you might as well extend that to race.

Focusing on Monica, a beautiful and intelligent Jewish woman who finds success in the uber-competitive world of gourmet cooking, “Friends” exercises its opinion that fat people are sub-humans who are valuable mainly as clown-like entertainers — as seen in literally every single flashback that features the formerly overweight character. Enjoying eating delicious food is a pillar of Jewish culture. The Talmud even describes the obesity of great Rabbis in detail, arguably to point out that there is nothing unholy about being fat. We vote for a zaftig musical Monica.

Problem: “Friends” viciously demeans gay people Solution: Musical theater has been carried on the backs of gay people throughout its history and this show should be no exception

A partial list of things “Friends” has derisively called gay: touching people, marrying a person you are attracted to, bags, love, beer, parties, dolls, dancing, having a police partner, and caring for children. Every male character, particularly Chandler, seems repulsed and terrified of homosexuality. But now “Friends” is becoming a musical, and musicals don’t exist without LGBT people. Plus one of the creators, Tobly McSmith, has been open about his transition as a trans man and how that affects his art. Judaism has come so far on LGBT issues since “Friends” aired in 1994. Could this musical also be a chance for “Friends” to reestablish itself as a welcoming place for all different types of people seeking community and really good music?

Problem: Friends introduced an exceptional Jewish female character in Season 1, but never brought her back Solution: Bring her back, “Friends! The Musical”!

In Season 1, episode 6, the sexy and (retrospectively) self-hating homophobe Chandler goes on a date with a woman who has the capacity to redeem him and the entire series. Aurora is a beautiful, self-possessed Jew with perfect curly hair and stories about surviving tank attacks as a combat soldier in the Israeli army. Aurora is interesting, Aurora is accomplished, Aurora is smart, and Aurora happens to be polyamorous. And for a show that goes on to many more seasons of joyfully shaming women, Aurora’s sexuality is presented as a problem only because Chandler wants a monogamous commitment. Aurora, platonic ideal of how Jewish women should be written for television, deserves her own spinoff show, but we’ll settle for a major solo in the musical.

Problem: Monica references a rap Ross did at her Bat Mitzvah but we never hear it Solution: The solution is obvious. We must hear this rap.

Could “Friends! The Musical” BE More Jewish? Yes, Here Are 7 Ways