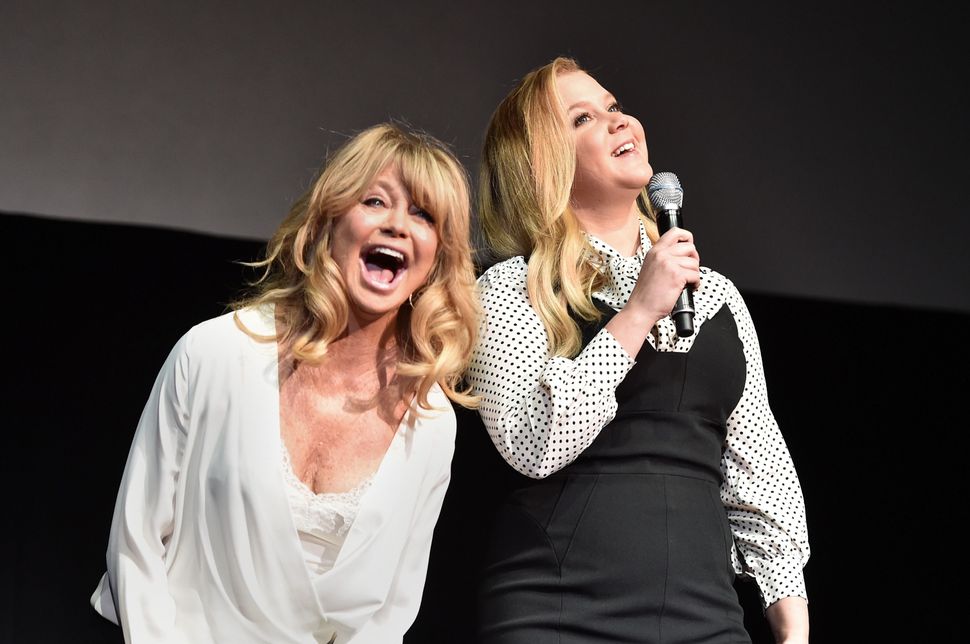 “Snatched,” (double entendre intended, we imagine) starring Schumer and Hawn, arrives in theaters on May 12th, just in time for Mother’s Day. Directed by Jonathan Levine and hailed as a “Mom-com”, the movie serves as Hawn’s comeback role after a 15-year absence from film.

The epic take on buddy-comedies invents a whole new jealousy genre: #fictionalmotherdaughtercharactergoals. Read on for the best quotes from Hawn and Schumer’s raucous press tour:

Goldie Hawn already has a daughter, actress Kate Hudson, but she told Entertainment Tonight that hanging out with both girls while filming was like being with “my two daughters.” Goldie, Kate, and Amy snorkeled and sunbathed together in Hawaii while shooting, during which Amy says she “tried to impress” Kate, who is “like a mermaid.”

This is what Goldie Hawn looks for in a man

During an interview at CinemaCon, Hawn was asked to list desirable qualities in a male co-star, but ended up giving a passionate manifesto everyone with a mother will recognize as a list of son-in-law demands.

“Hot isn’t enough. When you think about what you want — he’s gotta be funny, talented, sexy, he’s gotta have a nice face, he doesn’t have to be gorgeous.”

From your mouth to God’s ears, Goldie.

They have the same DNA

Though they play the decidedly goyische-sounding mother-daughter pair “Linda and Emily Middleton,” Hawn and Schumer have traced their roots to the same origin.

“We were just talking about the DNA — we have the same DNA!” Hawn told EW. “Off-camera, we’re very much the same.” And Schumer also referenced their shared faiths in an interview with Total Film, telling Hawn, who is 71, “I love the way you live…I hope I can be you, well, double of you. Do I look like a fat girl going to temple?”

Schumer has been wildly effusive when speaking about Hawn, calling her “the funniest person alive” and her “favorite actor.” In fact, Schumer approached Hawn on a plane and said, “I want you to be in a movie with me.” The comedian, who has been been following the Oscar-winner since childhood, said she felt Hawn “raised [her] in a lot of ways.”

Amy had to beg for Goldie to get the role

When Schumer went to film execs to propose Hawn’s role in the movie, she was flat-out rejected. “They didn’t want me at first,” says Hawn, who took a break from Hollywood after “The Banger Sisters” in 2002.

This would not do.

“I said, ‘Over my dead body Goldie is not going to be in this movie. I’d die for her,’” Schumer told EW.

Amy, her sister Kim Caramele, and co-writer Kate Dippold based the movie off their own mothers

Let’s get this out of the way: “Even if you have triggering Mom issues, you’ll still enjoy the movie,” Schumer said during the film’s CinemaCon screening in Las Vegas. The comedian and her sister co-wrote the script by Kate Dippold (“The Heat”, “Ghostbusters”), and all three women say they had their own relationships with their mothers in mind during the writing process.

For Schumer, it’s deeply personal. “This is some ways a love letter,” she said. “You know ‘Trainwreck’ was kind of to my dad, and this is kind of a peace with my mom.”

Bring drinks to this movie

“Well, drinking with a man in a foreign country, huh? That’s a smart responsible thing to do,” Hawn’s character derisively tells her daughter in the trailer for “Snatched”.

But there’s one thing the mother-daughter pair agree on: when you go to see “Snatched,” sneak in the booze.