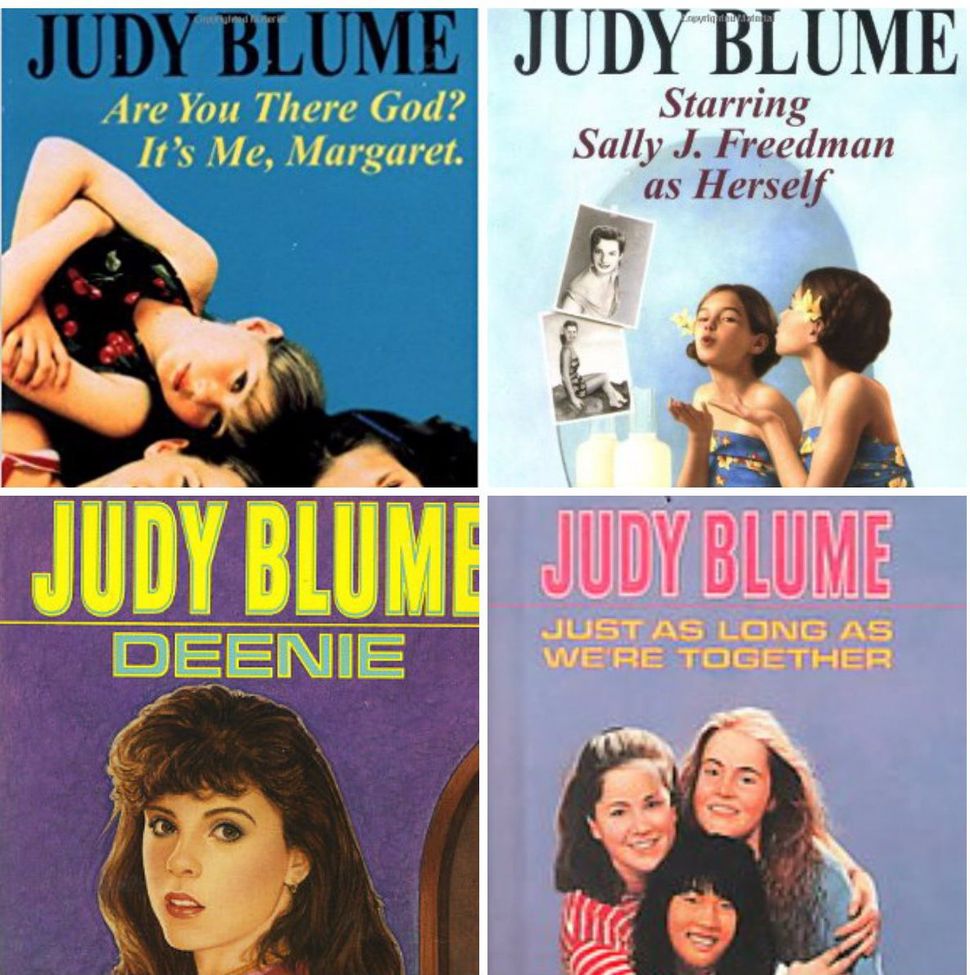 I didn’t learn about changing bodies, breakups, friendship fights, and procreation from my middle school health class. That half hour was mostly reserved for the P.E. coach to talk about basketball with all the cool 13-year-old jocks.

Instead, I turned to Judy Blume, who was a friend, storyteller, mentor and sex educator all rolled into one (and really, when you’re a perpetually anxious teenager with heartwrenching crushes on all the cool 13-year-old jocks…what more could you ask for?)

It was announced this month that Blume has won a Lifetime Achievement Award from the American Academy of Arts and Letters, which is a perfect excuse to dig through your closet, and dust off the covers of all your favorite well-worn, dog eared teenage novels. Here’s a few suggestions of Judy Blume books to revisit, while you thank your lucky stars that you no longer have metal on your teeth, or are still wearing your sister’s itchy training bra.

Starring Sally J. Freeman As Herself

This one transports you to Miami, right after World War II, and it’s all told through the eyes of 10-year-old Sally J. Freeman. On the one hand it looks at racial segregation and anti-Semitism, and on the other, there’s crushes, glamorous movie stars, adjusting to a new school and Mr. Zavodsky. Remember Mr. Zavodsky?! The one Sally secretly suspected was Adolf Hitler in disguise, and then wrote a bunch of accusatory letters to?

Blume said the book was rooted deeply in her own experiences as a child. “Some of the Yiddish expressions used by Sally’s grandmother in this book are words I learned from my own grandmother. And Sally’s family is based on my own. The setting, Miami Beach, Florida, in 1947- 48, is real too,” she wrote on her website. “I spent two school years living in Miami Beach after the war. Sally’s world is the world as I perceived it, at age ten. A world of secrets kept from children, a world of questions without answers.”

Are You There God? It’s Me Margret

You really can’t do any sort of Judy Blume list without this one. The Young Adult classic dealt frankly with periods, sex, religion and (ach) Seven Minutes in Heaven. It was, according to Blume, the book that gave her her “first and most loyal readers.”

It also brought on a flurry of censorship. In 1980, the book was removed from elementary school libraries in Gilbert, Arizona, while junior high school students in the same district needed written permission from their parents to read it. The same went for Tuscaloosa, Alabama and Fund du Lac, Wisconsin, where school systems deemed the novel “sexually offensive and amoral.”

Just As Long As We’re Together

A personal favorite. Remember Rachel, Alison and Stephanie, and all of the fraught, delicate tightrope walking that was teenage friendships? Also, I remember Rachel’s mom was a travel agent which always seemed so glamorous, the school dance scene was thrilling and Jeremy Dragon was very dreamy.

Blume also explored the impact of divorce on children’s lives, which she did just as much for her readers, as she did for the sake of the story.

“I love writing about girls’ lives when they’re right on the edge,” she explained. “One minute they act like little kids, the next they’re young women. And by creating families and situations that kids have no control over, I get to see how they cope and so do my readers.”

“Deenie” dealt with scoliosis, body image (“Helen is the brains, Deenie is the beauty!”) and…masterbation. This, once again, did not curry favor with many sensitive parents and, to borrow Blume’s words, “religious zealots.”

Really, though, all Blume wanted to do was tell honest stories.

“Parents try to keep things from their kids and often what the child invents is much worse than the reality. I was very imaginative as a girl and I came up with scenarios that were at least equal to anything that was really going on,” Blume told The Telegraph. “Telling kids the truth isn’t always entirely possible, but talking to them is.”