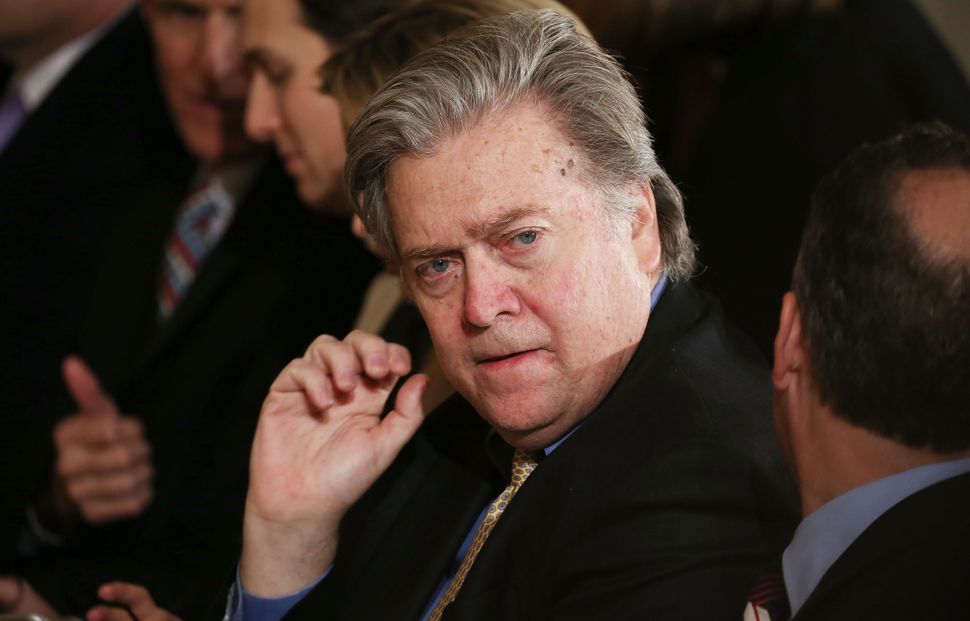 In an interview with Bloomberg News yesterday, President Donald Trump called White House Chief Strategist Steve Bannon, “a very good guy” who just has a “bad rap”. Now that statement is at least half true: the script for Bannon’s misbegotten rap musical “The Thing I Am” has been discovered and given a table reading by the news website NowThis, decked out with a team of thespians including Kate Berlant, Nyima Funk, and Gary Anthony Williams.

“The Thing I Am,” co-written by Bannon and Julia Jones, sets Shakespeare’s “Coriolanus” in Los Angeles during the 1992 riots, reimagining the Roman and Italian tribal adversaries at the heart of the play’s conflict as the Cripps and the Bloods. Like ill-conceived amateur Shakespeare productions everywhere, it’s hard to tell exactly which aspect makes the show completely incomprehensible. Bannon follows the well-trod path of liberating a single phrase from within the dialogue (“The Thing That I Am”) and isolating it as the title so it will sound redolent and modern (see: “The Fault in Our Stars,” “Sleep No More,” “Kiss Me, Kate”). A better title might have been another quote from the play — “If You Want to Bury Your Shame.” His and Jones’ imitation of Shakespeare’s language includes lines like, “You who’d be less chicken-shit than Uncle Tom, who loves a noble life more than a long, who likes to jump the body in the clouds with substance that overcome a certain death in life, pluck out your simpering tongues.”

The whole thing seems like the effort of a suburban 16-year-old whose English teacher has included a creative option in the end-of-year project rubric. The script is a frightening look into how Steve Bannon imagines black people living in cities must speak to each other. At one point, a group of young gangsters shout “peace, cuz!” in chorus. Rather than Shakespeare or gang members, the strongest voices here are Bannon and Jones — as one character put it, “the bitches prevailed.”

Bannon plays to his strengths, which are a free-wheeling use of the n-word and excessive stage directions. (Judging by the NowThis reading, the script is about 40% stage directions.) Locations include “The Serengeti,” “Interior, elevator cage,” “Maternity ward,” and “Blood hideout.” In an umpteenth stage-direction break an actor intones, “He checks a gun barrel, then picks up a rod and begins cleaning it. As he talks, the gun transforms: it’s deadly, it’s sexual.” It’s hard to tell whether Bannon is less in touch with gang culture, Shakespeare, or theatrical convention, though “abandon hope all ye who fuck with her” is a character description that feels like it could be pulled off Backstage’s casting listings today, perhaps proceeding the words, “Must be comfortable with frontal nudity.”

Bannon’s creation has caught fire online, with various news outlets referring to it as a “Hip Hop Rap Musical” (NowThis), “Hip-Hop Musical” (Vanity Fair), and “Rap Musical” (The Independent). But the twenty-minute long reading by the actors contains no actual singing, rapping, or dancing. It is actually written as a screenplay. A Daily Beast article from 2016 says that the script contains “rap music” with lyrics by Jones and Bannon’s assistant’s son, who is not credited in the article. So do these rap lyrics exist? Does music play any part in this? Or are journalists jumping to the racist assumption that a play with all black actors and complex language must involve hip-hop and rap? Has Steve Bannon’s art turned a mirror on his liberal critics? Will we ever see the other Shakespeare project Jones says she co-devised with Bannon, a movie version of “Titus Andronicus” set in outer space? The answer to both is “probably not,” but still, this so-called musical continues to prove that in these times we would do best to expect the unexpected.

The thing “Coriolanus” has in common with the Los Angeles riots of 1992 is that both stories include mass rioting. The thing that “Coriolanus” has in common with Steve Bannon is that it is is about a man who, despite being personally unpopular, has had success in various life endeavors, which leads him to unwisely overreach into politics, where he is reviled by the people and eventually deposed by his enemies (here’s hoping).

“Let the mutable, rank-scented many see the thing I am, and in me, see themselves who have no power,” says the actor playing Coriolanus, approaching his own death. Is Bannon prophetic? The evidence says maybe — the ‘90s-era script contains multiple instances of men grabbing other people’s crotches.