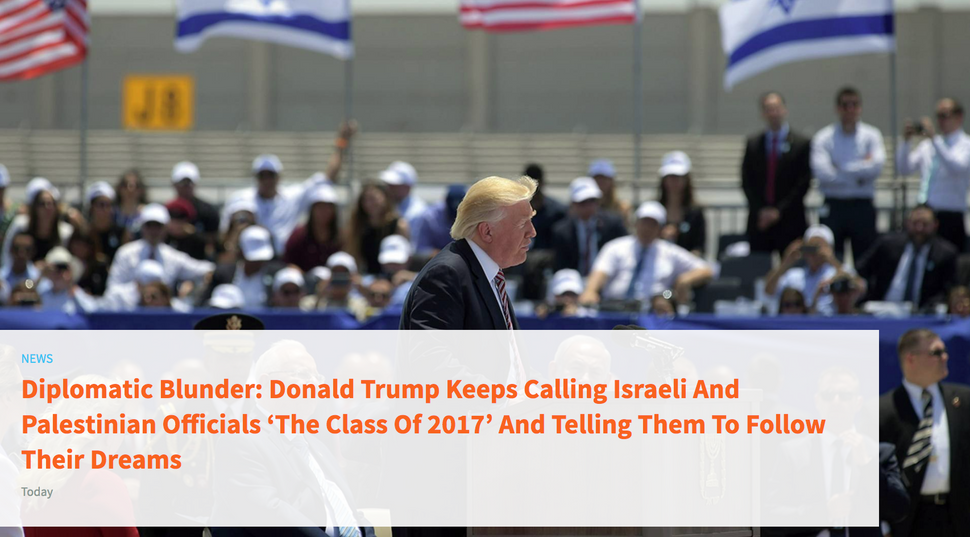 With Donald Trump in Israel on his first trip abroad as President of the United States, plenty has been written of his promise to solve the Israel-Palestine conflict. None of them capture the futility of Trump’s quest (“if Jared Kushner can’t produce peace in the Middle East, nobody can”) quite like this headline from ClickHole:

It is possible that President Trump will do what nobody before him has been able to: successfully navigate one of the most complicated geopolitical conflicts in modern history. But it is equally possible that he will look out over the sea of Knesset Members and tell them that “I’m inspired by the dedication of this student body and honored that you would allow me to speak at your university.”

We have long been fans of ClickHole’s witty takes on political happenings. In honor of President Trump’s foray into Middle Eastern politics, here are five other times that ClickHole has nailed the Israel-Palestine conflict.

1) We Took An Israeli Child And A Palestinian Child And Put Them Together In The Same Room. And We’re Going To Keep Them.

Favorite line: “These children happened to be born on different sides of a war, but really they’re not so different. They both love soccer. They both like to whistle. They’re both very bright and well behaved. Overall, we think they’re top-notch. And we’re never letting them go.”

2) Only Some People Are Jewish

3) The Conflict in Gaza Explained in One Long Noise

Favorite line: “A quick video that explains the conflict in terms we can all understand.” (Really, you just need to watch the video).

4) Progress: Bertolli Is Finally Recognizing Palestine On Its Homepage’s ‘Choose Your Country’ Drop-Down

The United States does not recognize Palestine as a nation. Neither do Israel, the U.K., Italy, and dozens of other nations. But you know who does? Bertolli, an Italian food brand specializing in tomato sauce and olive oil.

Favorite line: “It’s hard to say whether this will change any minds about Palestine’s ongoing struggle for independence, but one thing is clear: The people of Palestine have a friend in Bertolli.”

5) Beautiful! This Palestinian And This Israeli Are Friends With Horace The Singing Plumber

“This story is proof that there is more that unites us than divides us. Get ready to feel inspired!”