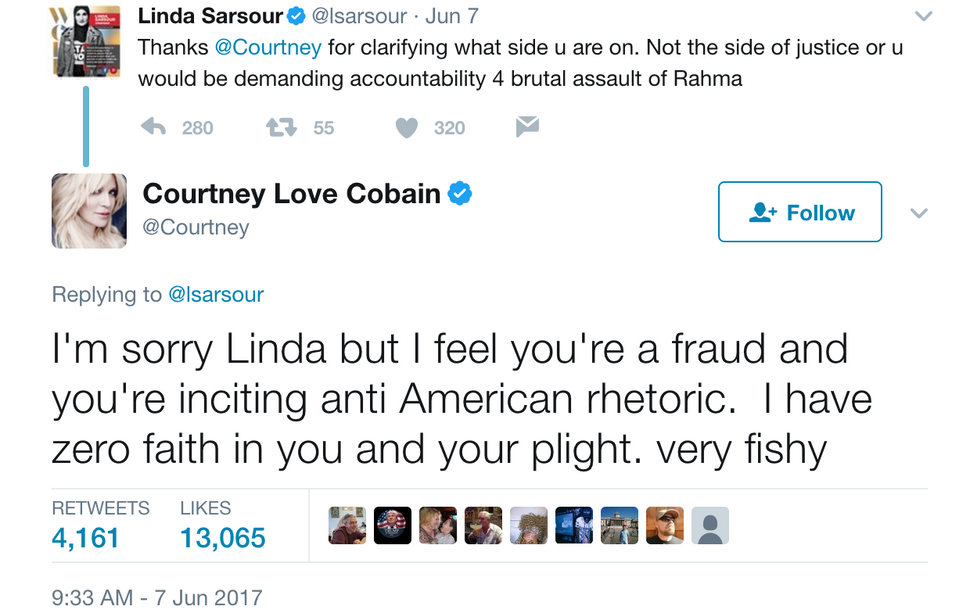 “I won’t follow anything thats being led by an anti-Semetic terrorist that’s using feminism as a tool to promote her radicalism,” Love tweeted.

unfollowed. I won’t follow anything thats being led by an anti-Semetic terrorist that’s using feminism as a tool to promote her radicalism

The tweets were in response to an online fundraiser Sarsour started for Rahma Warsame, a Muslim-American woman who was injured in Columbus, Ohio this weekend. On her fundraiser page Sarsour wrote that Warsame was “brutally beaten by a white man as she came to the defense of another sister.”

The event seems to have been an altercation between several members of the same apartment complex, but by the time Sarsour raised $80,000 for Warsame’s cause, a statement was released by the Columbus Police Department saying, “There is no evidence at this time suggesting that the incident involved any type of bias which would constitute the incident being investigated as a hate crime.”

Though the last thing this horrifying incident really needs is Courtney Love, who is famous to this millennial mostly for her anti-cheese crusades, Courtney Love stepped in.

“You’re a vile disgrace to women and all mankind,” she tweeted, going on to call her “a fraud,” and defending her comments by tweeting, “I worked my ass off my entire life to defend women, I didn’t create fake stories and lie about them nor rip people off financially.”

Welcome to America where a white woman “celebrity” uses her platform to deny that a Black immigrant Muslim woman was brutally assaulted.

Thank God I never knew who @Courtney was before today and that was a great thing.

Regardless of the side your on in this unprecedented and darkly addictive Love/Sarsour showdown, it’s worth noting that Sarsour, who helped organize the Women’s March and is a Palestinian activist, has been the target of violent Islamaphobic threats. Love, who indeed also has feminist credentials, is unlikely to be attacked for her views but has been “battling a cheese addiction”.