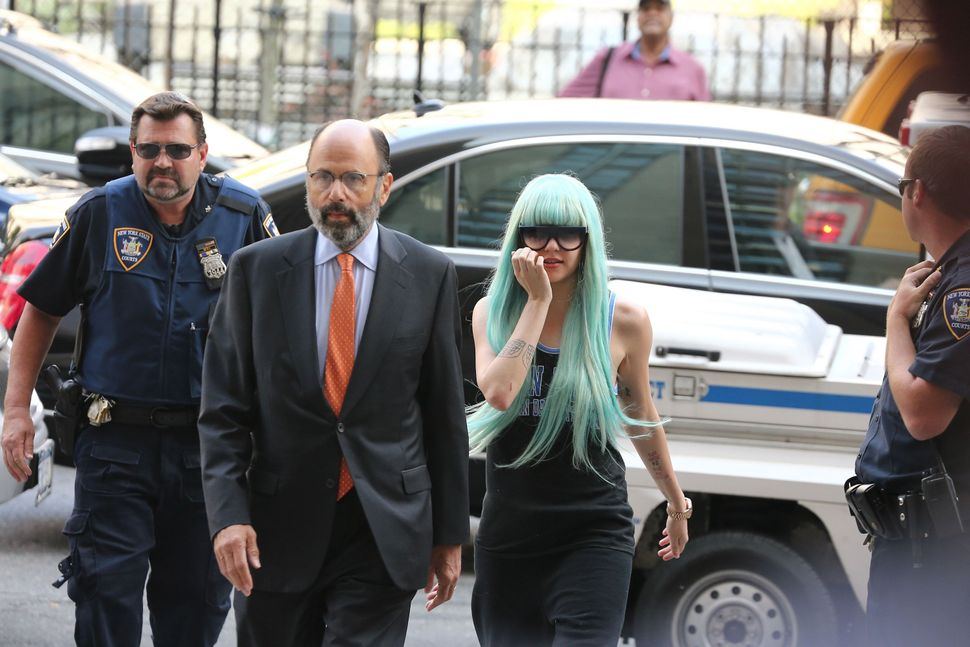 Returning to the public eye for the first time after a breakdown that was as horrifying as it was well-documented is hard enough without being forced to rate pictures of yourself on television.

But that’s what happened to Amanda Bynes.

The former child star was badgered by questions about her vagina and asked to rate series of pictures of herself and others based on their hotness in her first interview since she was institutionalized three years ago. The actress’s dangerous and upsetting behavior from 2012-2014 was not celebrity hijinks but likely an untreated mental illness. Bynes had been beloved for her joyful, empowered-seeming comedy since her days as the host of the “Amanda Bynes Show” in the 90s so watching her suffer was especially difficult. Her return to Hollywood in the form of a 7-minute interview with an un-endearingly ebullient AOL host is a hopeful sign that we might get our Amanda Bynes back—and that Amanda might get herself back.

She Still Seems Sick It’s difficult to appropriately address Amanda Bynes’ obvious psychological problems without participating in the exact public dissection that may have contributed to her breakdown in the first place. But it would be irresponsible to say that Amanda Bynes seems happy or healthy in this video. She opens the interview by saying “I’m doing great, thank you, really great”, but she sounds robotic, staid, and unexpressive. In fact, she sounds like her character in “She’s The Man” when she mocks debutantes. If this is Bynes’ new way of protecting herself then we’re all for it. But she doesn’t seem well.

She Is Going To Start Acting Again Asked if she misses her acting career, Bynes said, “I do miss acting, and I actually have something surprising to tell you: I’m going to start acting again.” This would be very wonderful except that Bynes sounded so hollow and miserable that it doesn’t seem right to celebrate. She elaborated, “I want to do TV. Maybe a few guest spots on some shows that I’m a fan of and maybe another tv show where I’m the star of it in the future.” Feel better soon, Amanda! This age of amazing female comics needs you!

She Wants To Create A Fashion Line
Bynes has been studying fashion at the Fashion Institute of Design and Merchandising, or FIDM. “I love it!” she said. “I learn how to sew, I make patterns, and I’d love to start a clothing line in the future.”

She Feeds The Homeless “I feed the homeless,” Bynes told her interviewer. “And that’s been really interesting and fun.” In defense of this exuberantly tone-deaf line, the question was, “How do you motivate yourself on a daily basis to wake up and do good and strive to be excellent?” which is a fairly unkind question to ask a person emerging from a mental breakdown.

She Refuses To Rank Her Co-Stars In one of the (top 15) cruelest moments of the interview, interviewer Diana Madison pulled up pictures of Zac Efron, Channing Tatum, and Seth MacFarlane, and asked Bynes to judge each of them “hot or not.” Bynes rated all three hot, and said, defiantly, “They’re all hot.” Madison apologized to the camera. Sadly Madison then bullied Bynes into ranking the three actors, then ranking three pictures of herself, then ranking three pictures of female actresses. Watching this made me want to initiate my own public two year breakdown.

She Still Wants Drake to “Murder [her] Vagina” In the most sincere and relatable part of the interview, Bynes reaffirmed her desire for the rapper Drake to “murder” her vagina. When asked about her famous tweet Bynes said, “I actually wasn’t being insincere. I was like, saying, murder my vagina”. When Madison once again asked if Bynes was “serious,” she responded, “I was serious but I was also on drugs. But that was my way of saying ‘lets do it man’, but I was on drugs and trying to be hilarious.” But what does getting your vagina murdered entail? “I don’t know,” said the exasperated Bynes, throwing up her hands. “It just means: f**k me, Drake.”