Thank You, Michael Bond, For ‘Paddington Bear’ — And Teaching Me Jewish Compassion 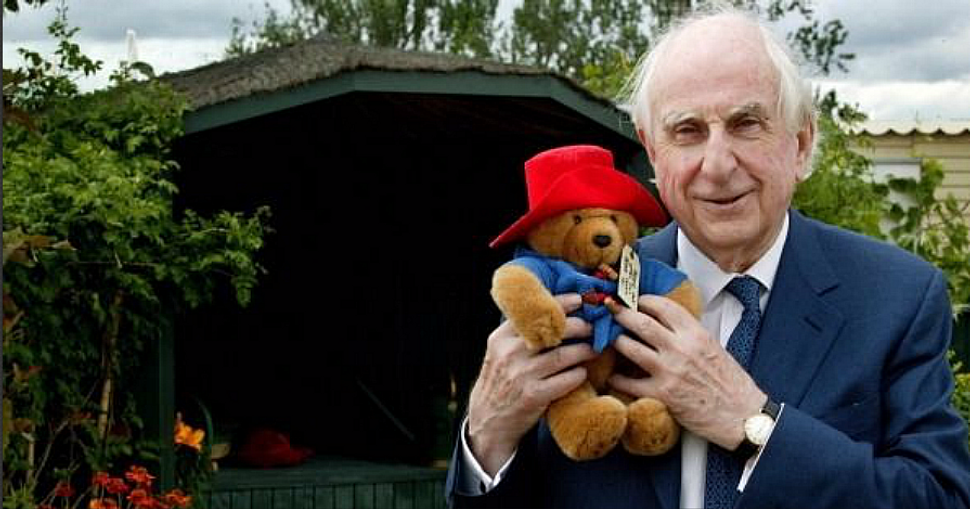 “A bear? In Paddington Station? Don’t be silly Henry, there can’t be.”

“But there is,” he insisted.

As a child looking at pictures of Paddington Bear stories before I could even read, it meant friendship with a new character, a growing love of British culture, and curiosity: what exactly is orange marmalade and what does it taste like?

But for Michael Bond, the creator of Paddington Bear who died yesterday at 91, his bear represented refugees. Specifically, the thousands of European Jewish children who were separated from their families and evacuated to the United Kingdom on trains on the eve of the Holocaust in an operation called “Kindertransport”.

Bond remembers seeing Jewish children come through Reading Station on the way to London in the days before World War II broke out. “They all had a label around their neck with their name and address on and a little case or package containing all their treasured possessions,” he told The Guardian in 2014. “So Paddington, in a sense, was a refugee, and I do think that there’s no sadder sight than refugees.”

The true nightmare that is making the choice to separate children from their families and leave them to the mercy of strangers who don’t share a culture or a language seems worlds away from the fictional antics of a very polite bear. But Bond, whose first book “A Bear Called Paddington” came out in 1958, deliberately made Paddington a representative of those children. Paddington, readers learn, was orphaned a few weeks after his birth, when his parents died in an earthquake. He was taken in and raised by his Aunt Lucy in “darkest Peru”, but she became too old to care for him. It is she who sent him as a stowaway on a ship to London, with nothing but a hat, a photograph, and a supply of marmalade to his name. When kindly Mr. and Mrs. Brown, who are at the station picking up their daughter Judy, find Paddington, he has a label around his neck that says, “Please Look After This Bear. Thank You. Aunt Lucy.”

Reading Bond’s original book as an adult conjures a kind of panic I never felt for Paddington in my pre-marmalade days. Like when the Brown family buys Paddington a coat that he never takes off, which means that he was naked during his journey. Or when they buy him lunch and a drink and he is so overcome by hunger and thirst that he cannot choose which to enjoy first. Or when they take him into their home even though they already have two children; even though they came to the train station looking for their daughter who they loved, not a bear.

When I was introduced to Paddington Bear at five years old I did not know that, like most Jews of my generation, the next decade of my life would feature beautifully illustrated picture books depicting the Warsaw Ghetto, innumerable young adult novels from the perspective of brave little girls surviving concentration camps, youth group event airings of “The Pianist”, and the constant specter of Anne Frank, frozen forever at 16. I didn’t know that stories could have a purpose other than fun.

And when those attempts to educate my peers and I began to take hold and we started to feel the weight of our history, I still didn’t know, could not have imagined, that I would live through what has become another global refugee crisis, one where the world would once again discuss whether almost certain murder is acceptable for entire communities, or if children should be exempted.

Often it seems like the human brain is not capable of organically manifesting compassion. We have to be taught, instead. We are indebted to Michael Bond for teaching us to care for those who find themselves without a home, for creating a character who greets injustice with “a hard stare” and is known for excessive politeness.

Michael Bond was so moved by the sight of foreign children that he eventually wrote 26 books about them. “In London nobody’s alike,” says Paddington, “which means everyone fits in.”

With 35 million Paddington books sold throughout his lifetime, Bond fit everyone in. People like Paddington, who come from a very dark place, people like the Browns, who made room, and people like Bond himself, who devote their lives to issues that aren’t personal to them.

But there is, Michael Bond insisted.

Thank you, Mr. Bond. We’ll look after your bear.

Thank You, Michael Bond, For ‘Paddington Bear’ — And Teaching Me Jewish Compassion