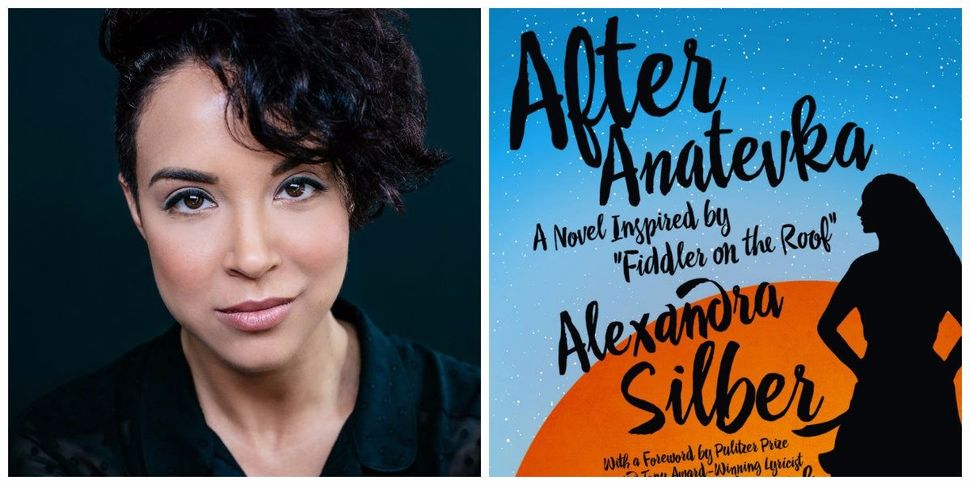 There are some mysteries within Judaism so profound that we may solve them in only the World To Come.

How can we believe in a God we cannot see? Will there ever be true peace in the Middle East? And what the hell happens to the characters in “Fiddler On The Roof” after the musical ends?

Acclaimed actress Alexandra Silber has taken it upon herself to answer these questions in her new novel “After Anatevka,” which follows the lives of Tevye’s daughter Hodel and her friends and family after the curtain falls.

Though Silber was first introduced to “Fiddler” when she debuted in a Metro-Detroit high school production as matriarch Golde, Judaism was not always center stage in her childhood. Silber’s mother came from a long line of Catholics but preferred Eastern thought. Her father, despite being a direct descendent of the Pale of Settlement Jews that “Fiddler” traces, embraced Jewish theology “as a metaphor, the way so many people love Greek mythology.” Judaism might have remained one of the many legends coloring Silber’s childhood were it not for Christmas traditions in the United Kingdom, of all things, that reunited Silber with her faith and with herself.

After finishing drama school and instantly assuming a role on London’s West End, Silber was cast in a Sheffield production of “Fiddler” as Hodel, Tevye’s sharp second-eldest daughter. “It was what they call ‘A Christmas job,’” she said with a laugh. With only three Jewish actors involved, the show’s producers decided to embark on an immersive course on Jewish ritual and history to educate the cast. “I just lit up,” Silber said. “It was an immersion into not only my faith but my personal DNA — I felt like I had found my identity.”

Silber’s transformation into Hodel over that cold Sheffield Christmas became a painful act of personal reckoning. “My father passed away when I was 18 — the very first experience I had of great meaning in a temple was his funeral, at which I delivered the eulogy,” she remembered. “I recognized that I could either curl up and die or I could become myself at this pivotal moment. So I became myself, and it left very little room for grief.”

Years later the grief returned, refracted through the experience of another young girl, Hodel, who leaves her father and Anatevka behind to try to free Perchik from the Siberian work camp where he has been imprisoned for political dissent. “I was confronted by my grief when I played Hodel. Her final words are, ‘Papa, God alone knows when we shall see each other again.’” Silber recalled. “I played Hodel for two and a half years. She endeared herself to me unlike anything else I have known. She gave me a tremendous sense of freedom.”

Though Silber has found almost constant stage work since she graduated from The Royal Conservatoire of Scotland, she found another creative release in her blog, which was discovered by a literary agent who encouraged her to write something novel-length. “I said to her, ‘Don’t you see that I write essays about raspberry jam and Angela Lansbury?’ I’m not a novelist,” Silber said. “It was she who rooted out that I had unfinished business with Hodel. I just always wondered what happened to her.”

“After Anatevka” was written “in between scenes, in between jobs, on subways, on airplanes.” Committed to historical and religious authenticity, Silber’s research was immaculate. “When I didn’t know the answer to something, I would read an entire book about it. I called a lot of rabbis, did a lot of reading, did a lot of Russian embassy teas where I asked a lot of questions.” Silber says her method of research was borrowed from Judaism itself. “Our religion is a long tradition of meaning-making, which is a phrase from Rabbi Larry Hoffman [the Broadway production’s Jewish consultant]. Meaning-making is at the center of Judaism, and actors do a similar thing. We take facts and give them meaning.”

Silber’s search for facts was merciless. “I became so crazed that at one point I felt that I physically had to go to Siberia,” she said. “After Anatevka” contains ultra-specific details about the color of Siberian salt mines, which Silber visited on her three-month pilgrimage. “It was very important to me that I knew what the soil smelled like,” she said.

Silber finished the first draft of “After Anatevka” four years ago; she put away the manuscript and forgot about it. “I thought, ‘If no one ever reads it, that’s okay.’ That’s not why I wrote it.” Then, two years later, she was cast as Tzeitel, Tevye and Golde’s eldest daughter, in the revival of the musical on Broadway. “It doesn’t get any more sunrise, sunset than that,” Silber said.

By the time Silber was called on to play Tzeitel, she, too, had grown up. “I was done being Hodel. I was no longer searching for who I was or what I believed in — I knew what I believed,” she said. “I was thinking about family and my faith and marriage and children, and I was much better soulfully suited to serve Tzeitel’s story.” Silber says that she “bridged that gap between those two women inside [her] own body.” She hopes that evolution will translate into the novel.

Sholem Aleichem’s immortal dairymen and tailors now live in the rambling diaspora known as public domain, so Silber did not need permission from his estate or from the musical creators to publish her novel. “Sheldon [the musical’s lyricist] and his wife, Margie Harnick, have been my champions, and like the grandparents I never had,” Silber said. “Perchik says in the musical, ‘We’re asking for your blessing, not your permission,’ and I sort of said the same thing.” Silber’s book, which was published July 4, begins with a forward by Harnick. Blessing received.

“Fiddler on the Roof” encapsulates the core Jewish tradition of toggling seamlessly between mourning and humor. I asked Silber if she was familiar with the game in which players are forced to sort three celebrities into three categories, indelicately titled “Marry/F**k/Kill”. Would Silber be willing to sort the three daughters’ male companions into categories, perhaps “marry, friendship, kill”?

“After Anatevka” was released July 4, with a forward by lyricist Sheldon Harnick.

Jenny Singer is a writer for the Forward. You can reach her at singer@forward.com or on Twitter, @jeanvaljenny.