The Most Famous Jewish Matchmaker In The Business Plays Nice(r) 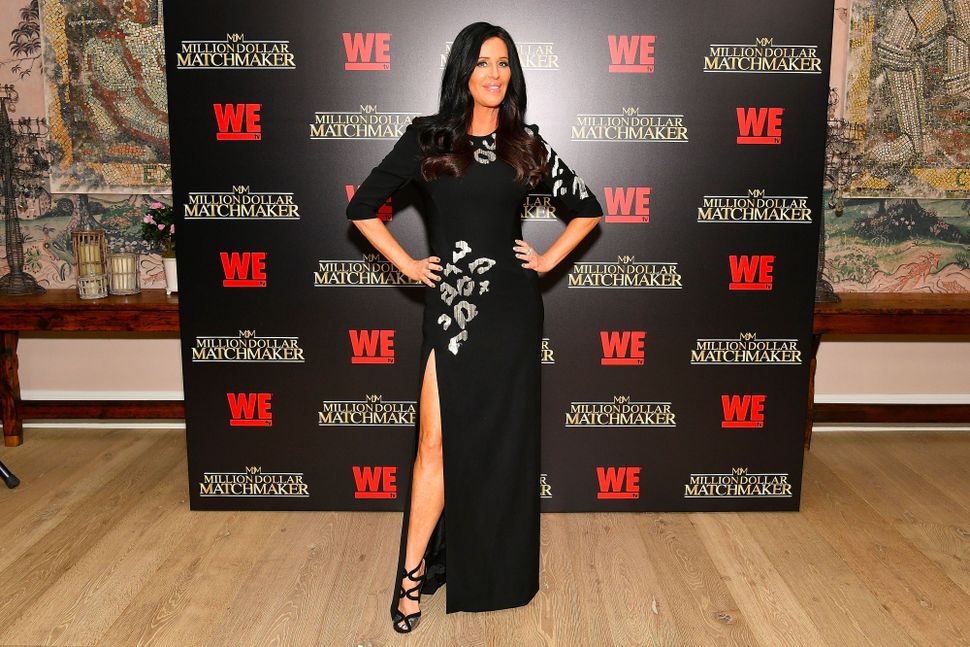 Everybody is mortally terrified of something. Some of us fear small spaces, the open ocean, airplanes, death. Others can’t watch horror movies and avoid public speaking.

I am afraid of Patti Stanger.

Stanger, the Jewish host of the reality series “Million Dollar Matchmaker”, is known less for her tough love than for her flagrant cruelty. The original iteration of her show, which aired on Bravo as “The Millionaire Matchmaker”, was dedicated to matching rich men with beautiful women harvested from big cities by Stanger and her team. Rare was the woman who escaped Stanger’s hypercritical eye without falling victim to one of her scathing insults, usually regarding their appearance and often targeting a part of themselves over which they have no control.

Woman on woman cruelty is what Patti Stanger built her career on but it seems, based on the premiere of season two of the show’s rebirth as “Million Dollar Matchmaker”, that she’s starting to understand the value of being nice.

Last night, I attended this premiere. The first episode, which airs Friday, August 4th on WE TV, documents Stanger’s attempt to rehabilitate two “The Bachelorette” castoffs, Daniel and Vinnie, both from JoJo Fletcher’s season. Daniel is portrayed as a narcissist, obsessed with the perfection of his own body and possessed of an impossible physical standard for women. Vinnie, conversely, is portrayed as the “too–nice” guy, the type who gives his heart away before properly vetting its new home.

The set up of the new show is, essentially, the same as the original. Stanger is tasked with finding the perfect woman for her flawed bachelors while also educating them on how to better their shortcomings. But there’s something different about this version of Stanger. The self–professed “third generation matchmaker” is softer this time around. She still doesn’t hesitate to say exactly what she’s thinking but it appears that her thoughts have become less vitriolic with age.

I confess I was afraid for the women onscreen as they filtered into Stanger’s matchmaking headquarters to be judged but I’m happy to say that my fears were unfounded. While Stanger’s antics are just as outrageous — at one point she allows a potential contestant to lick her toes -– the humor is no longer at the women’s expense. Instead, they are often part of the joke. Stanger doesn’t insult their skin or their body. In fact, it seems that Stanger has developed a new approach to matchmaking. In this version, the men are required to take responsibility for their faults and the value of the women who will date them once those faults are remedied is fully acknowledged.In this version, the women are not expected to settle. They are expected to demand exactly what they deserve.

I was nervous to attend this launch party. I was afraid I would run into Stanger, setting off one of her cutting rants about how I was not good enough, pretty enough, enough enough. This was, of course, a ridiculous fear. Stanger is a celebrity, a busy woman working hard to remain relevant and build her brand. She doesn’t care about me. But fears are rarely rational.

When the curtain went down on that first episode -– both Daniel and Vinnie had found the kind of success you can expect from that method of girlfriend hunting -– Stanger took to the stage to answer a series of questions from comedian Michelle Collins. She’s smaller in real life –- they usually are. She joked about her devotion to plastic surgery, her no sugar diet, and her own fear: that of being aged out of her desired dating pool. She admitted that she’s not always right and gracefully indulged Collins’ tendency to cut off her jokes with a better joke.

This was not the monster I had expected.

Later, as I roamed the room searching intermittently for both C-list reality stars and the waiter carrying around the mini-hamburgers, I realized something: I’m no longer afraid of Patti Stanger. And who knows? If the Courtney Stodden episode is as good as Stanger promises, maybe I’ll even tune in.

The Most Famous Jewish Matchmaker In The Business Plays Nice(r)