‘Roseanne’ Returns: The Most Outlandish Things Ever Done By America’s Spitting, Tweeting Sweetheart 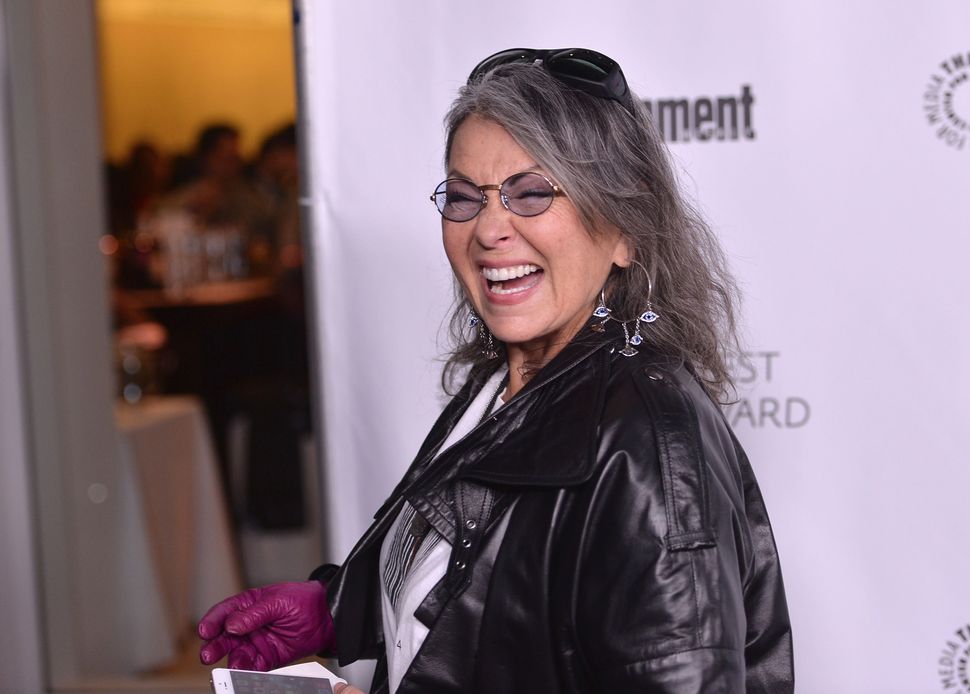 In the last year of the 1980s, the TV show “Roseanne” became the most watched television program in America. The show remained immensely popular throughout its nine seasons, and its star Roseanne Barr was hailed as the relatable voice of the working class.

But if you are a millennial who has only heard of Roseanne Barr via your father’s fondness for aging celebrities who kind of like Israel, all of this is new news.

Earlier this summer it was announced that ABC will produce an eight episode revival of the show in 2018, 20 years after the show went off the air. The show will bring back original stars including Barr, Laurie Metcalfe, Michael Fishman, and John Goodman, despite the fact that Goodman’s character succumbed to a heart attack in the final episode of the show.

With surging nostalgia bringing about the revival of shows like “Will and Grace,” “Twin Peaks,” “The L-Word,” and “Queer Eye for the Straight Guy,” everything old is new again. But if you’re too young to remember the woman who went mononymous before Beyonce, here are a few of her greatest moments. Talented, controversial, and often struggling to overcome major personal problems, Roseanne Barr is ready to ride again.

Roseanne for President In 2012, Roseanne Barr was the presidential candidate of the Peace and Freedom party. She earned over 67,000 votes and became the subject of a documentary. She believes that all three major candidates in 2016, particularly Bernie Sanders, “ripped” her off, specifically citing “socialism” as a concept that was stolen from her. She has said that she will write herself in for every presidential campaign until she wins. She has also said that America should feel “lucky” for a Donald Trump presidency. She has also said that the “Roseanne” reboot will not be “about” Trump, but rather will be “tackling some of the topics that are in the conversation today.” We say: let’s ride this Roseanne rollercoaster to its terrifying, fiery conclusion.

Roseanne’s Got Balls As a newly minted Roseanne scholar, it is this episode more than any that compels me to continue the holy work of refusing to let Barr’s triumphs sink into the past. For the uninitiated, the following events caused journalists to write headlines like, “The Barr Bungled Banner”:

At the height of her show’s success, Barr was asked to perform the national anthem at a baseball game between the Padres and the Reds. Tom Werner, who owned the Padres and executive-produced “Roseanne”, may have hoped to take the opportunity to bring two of his dearest endeavors together. Barr, who later said that she couldn’t hear herself and that she was encouraged to bring “humor” to her performance, sang the anthem like a true, freedom of expression-valuing patriot: she invented new notes, laughed midway through, and finished by scratching her crotch. President Bush called the rendition “disgraceful,” but Barr pointed out that if the people watching her really respected the song so much, they wouldn’t have been screaming insults about her body the entire time. God bless America, and long live Roseanne.

Roseanne Goes Millennial Roseanne has toggled back and forth between the Zionism of a year-round Floridian and the Israel-criticism of a Liberal Arts student with a light academic schedule, but she has remained consistent on one thing: a strong Twitter presence. Here are a few of her gems:

My granny is a hilarious woman, esp when she facetimes me and acts like she is a cat, licking her hands and meowing. I laugh and laugh! haha

Note that this tweet is referring to the most recent Superbowl

lady gaga rocks wow i never heard of her b4! she is great!

This exciting call for a return to cult-ish Judaism: 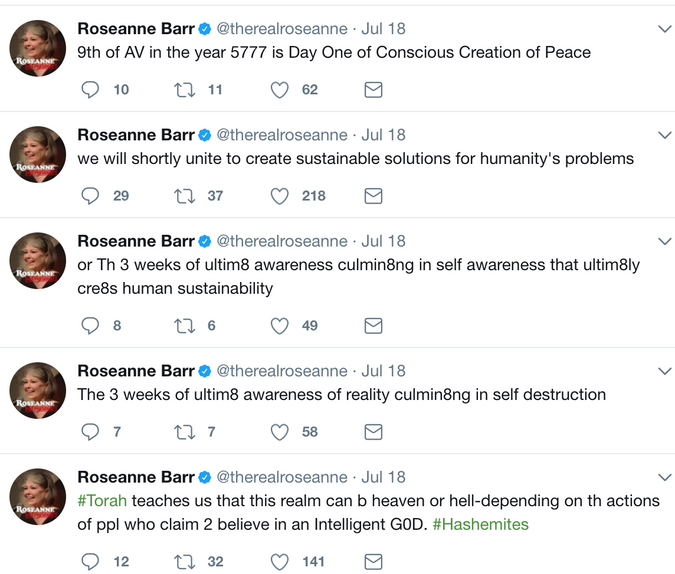 Body Positive, Hater Negative “Roseanne” was notable for featuring fat people who were funny and interesting neither because of nor in spite of their bodies. Roseanne calls herself “Fat and proud of it.” When people ask her how her diet is going, she responds, “Fine. How was your lobotomy?”

Nuts for Roseanne Roseanne Barr spends most of the year on her Hawaiian macadamia nut farm. Even Oprah finds this interesting. For a short time Roseanne starred in a reality TV show based on this fact, however it was replaced by reruns of “Dance Moms”.

‘Roseanne’ Returns: The Most Outlandish Things Ever Done By America’s Spitting, Tweeting Sweetheart