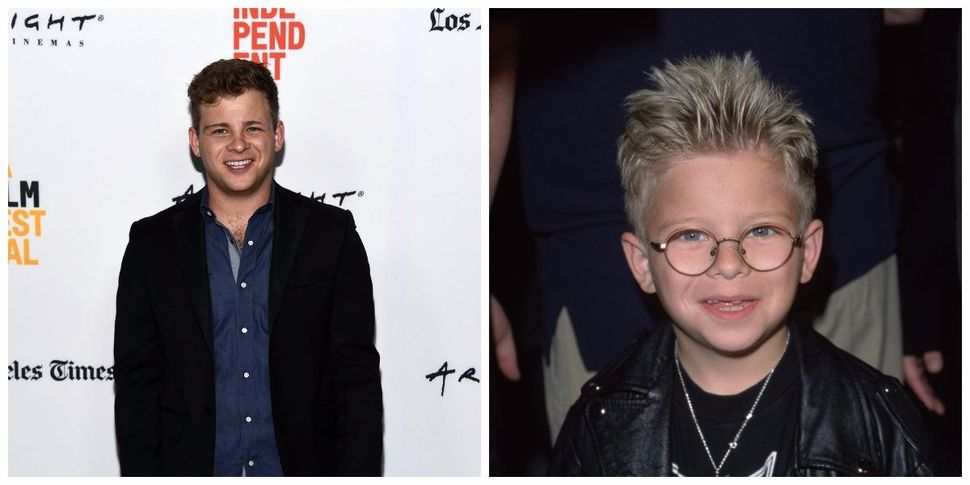 There are a few life-changing moments in every Jewish person’s life. The moment she is called to the Torah and becomes an adult in the Jewish community. The day she realizes she is the member of a tradition that stretches back earlier than antiquity. Her first trip to Israel. The day she reads an article in “Page Six” called, “How 10 Days In Israel Changed Jonathan Lipnicki’s Life.”

Say a little shehechianu, because your life is about to change.

It is said that when a butterfly flaps its wings, a tornado can take shape across the globe. And it is also said, by me, that when a sensitive young man has his life altered by a free trip to Israel, all of our lives change too.

Actor Jonathan Lipnicki recently went on a free, 10 day trip to Israel via Birthright (like so many of us), and then did an exclusive interview with Page Six to process it (like so few of us). As if we weren’t already shakier than Israel in a Jonathan Safran Foer novel, Times of Israel did an interview with Lipnicki which, frankly, has more information in it, and it changed our lives all over again.

Let’s process Jonathan Lipnicki’s processing of his life-altering trip together.

1.Judaism Had Jonathan Lipnicki at Shalom Let’s go straight to this major, major quote: “I’ve always been in touch with my Jewish identity and actually a little defensive of it because I feel one of the things we have in the states is a lot of people who want to take a step away from their Jewish identity like it’s something to be ashamed of.” I don’t want to play into negative Jewish stereotypes, but I think we’re all wondering — is Jonathan Lipnicki being paid by God to promote Judaism? This quote has the power of one million Rabbis and the appeal of a Gal Gadot grammar mistake.

2.Jonathan Lipnicki Cried At The Western Wall And We Cried As Jonathan Lipnicki Lowered The Walls Around Our Hearts “There’s nothing quite like the feeling of when you walk down the stairs that are above the Western Wall and the sun’s going down, and you see all these people dancing and praying … It was one of the most incredible feelings I’ve ever had,” Lipnicki said. “I was just overcome with emotion, and I was totally not crying,” he added. The only thing that would make this better is if Jonathan Lipnicki was a secret, underground member of “Women of the Wall,” the Israeli feminist group that fights for gender equality at the Kotel. The only thing that would make that better is if Jonathan Lipnicki and Anat Hoffman, the leader of Women of the Wall, were actually the same person, and had been doing a Mrs. Doubtfire-style deception for years. Excuse me, I have a pitch for a pilot to go write.

3.Jonathan Lipnicki Was Birthright’s 600,000th Participant He was gifted a free hat.

4.Jonathan Lipnicki Participated In Ice Breakers On Birthright Are you sitting down for this one? Are you lying down, breathing into an empty matzah box, trying to fill your lungs and fathom the glory of creation all at once? Good. On the first day of the trip, Jonathan’s Birthright bus played the get-to-know-you game “Two Truths And A Lie”, in which participants have to present three facts as true and guess which of each others’ facts are deceptions — basically the best way to legally have fun. During the playing of this classic game, one of Jonathan Lipnicki’s fellow participants turned to him and said, “You should totally tell people that since you have the same name, that you’re the Jonathan Lipnicki that played the cute kid in Jerry Maguire!”

5.Jonathan Lipnicki Has A Jewish Star Tattoo On His Chest When the redemptive hotness of all male child actors turned adult sex-symbols combines in one body and then brands itself with a star of David, we arrive at Jonathan Lipnicki. Somewhere, Joseph Gordon-Levitt, Justin Timberlake, and the guy who played Neville are nodding in approval.

6.This Quote Makes No Sense And That’s Part of Its Magic Lipnicki told Page Six, “The life-changing aspects of [the trip] are really finding community with the other people you’re with … seeing their outlook on life despite the circumstances they grew up with there. They’re such beautiful people inside and out. It gives you a lot of perspective, and I think that’s always something that we are missing now.” Is Lipnicki talking about his fellow American Birthright Israel participants? Probably not, unless he sees not being a precocious child icon as a difficult life circumstance. Could he be talking about the small group of Israeli soldiers who join Birthright buses for a portion of their trip? Could he, perhaps, be somewhat subversively referring to the sense of community he discovered when meeting residents of Israel who aren’t Jewish but share his passion for the land? This is the kind of mystery that changes lives, like mine, yours, and Jonathan Lipnicki’s.

7.Jonathan Lipnicki Has Some Thoughts On How To Heal America If you’ve observed that America is experiencing a nation-wide ideological and political schism that seems poised to tear the country apart, you are not alone. You are with Jonathan Lipnicki. Lipnicki’s advises: go to a place where ideological and political schisms will never tear a country apart! Israel! (Hah.) Lipnicki says, “It’s a crazy world we’re living in right now in the United States. Everybody is so divided that finding common ground with anyone is always going to lead to something really special.” Where did he find that common ground? Yisrael, and specifically, his Birthright bus.

8.Jonathan Lipnicki Lives With No Regrets “No regrets,” Lipnicki says of his child stardom. “It was the greatest thing that ever happened to me because I feel like I gained a lot of maturity and knowledge from that.” Mature. Humble. Grateful. Lipnicki.