From White Hoods To Popped Collars: The Normalization Of The Neo-Nazi 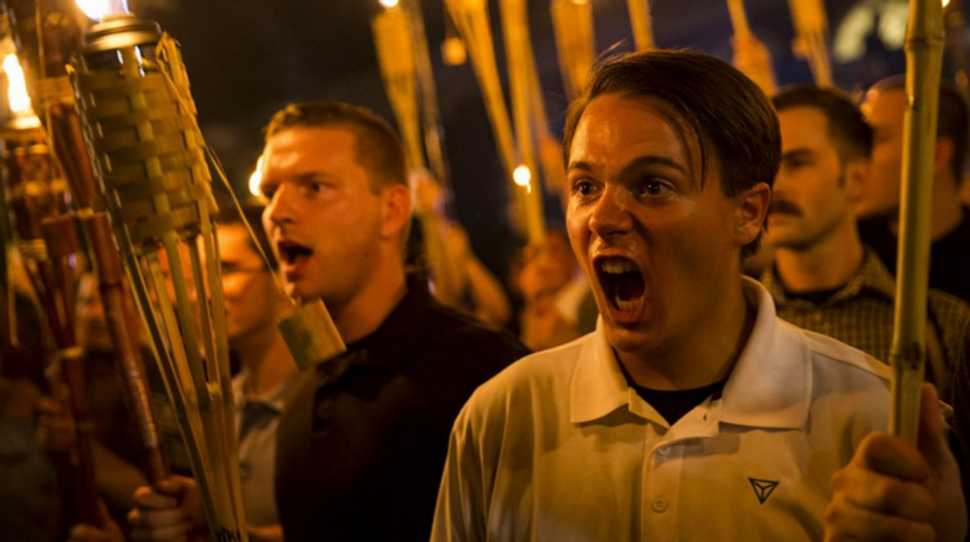 Branding is everything nowadays. The importance of infusing your product with an easily digestible message is at an all-time high — and there’s no better way to do this than to adopt an image that will summon an immediate connection to what you are selling.

Bigoted political movements have always demonstrated an understanding of this principle and we’ve seen a resurgence of their most famous symbols since President Donald Trump gave the white supremacist movement a new reason to have hope. We’ve seen swastikas plastered onto the sides of buildings, nooses strategically placed in front of memorials to the black struggle — but what has been conspicuously absent from this procession of white supremacist imagery is the white hood that is so intimately associated with members of the KKK.

The white hood was historically meant to disguise the identity of the wearer but, judging from the photographs that came out of Charlottesville this past weekend, anonymity is no longer considered necessary nor desirable. Instead, the brand these men presented emphasizes normalcy.

In a piece for Pret-a-Reporter, journalist Booth Moore wrote of the scene, “It was jarring to see their young faces, twisted with hate, and their outfits, more Verizon customer service agent than redneck. Unlike previous generations of racists, they didn’t cover up in hoods, they were front and center for the cameras, wearing a onetime emblem of preppydom, the polo shirt, also known as the tennis or golf shirt, that has in recent years become the uniform of the everyman of any color, worn by everyone from Def Jam Recordings co-founder Russell Simmons to president Barack Obama.”

Images out of Charlottesville make it hard to deny the uniformity of the men who came out to chant that “they will not be replaced by Jews.” But unlike their forebears, the KKK and the Nazi party of Germany, they are not bedecked in military attire or white hoods. Instead, they have chosen to assume what Moore calls “the uniform of the everyman”: a simple polo shirt often paired with khakis.

While the polo shirt has in the past been associated with WASPS, or “White Anglo-Saxon Protestants,” the outfit has since made its way into the mainstream. As Moore notes, “…fashion designer Ralph Lauren, born Ralph Lifshitz in the Bronx, made the polo shirt (emblazoned with a polo pony) the cornerstone of his WASP (White Anglo Saxon Protestant)-aspirational lifestyle brand, which sold the idea that any American, even a Jew from the Bronx like Lifshitz, could attain an aristocratic lifestyle…[and since then] urban lifestyle brands such as Phat Farm have embraced the style, too.”

Today, men (and women) of every creed, color, and sexuality can be seen wearing polo shirts and khaki pants. It’s a bold look to repurpose as the uniform of a supposedly niche, supposedly antiquated movement.

But to live in Trump’s America is to live in a world where the strictures of normalcy are constantly shifting. At first, Trump’s candidacy was considered outside of those bounds. Then, his success merited awe. Today, barely a 24-hour news cycle can pass without some fresh, new scandal that further chips away at our capacity for surprise.

Based on the happenings of these past few days, our country does not seem to be quite ready to accept the normalcy of the white nationalist movement. These men are being publicly shamed on social media and losing their jobs as a result. They are being denounced by their families and cut off by their friends. Many of them are paying a price for daring to show their face while supporting a movement that believes in the inherent superiority of white people over all others.

But this is not very comforting when one looks at the difference between the police presence in Charlottesville and the police presence at ‘Black Lives Matter’ protests, at protests supporting the right of black men to walk our public streets without fear of being murdered. This is not very comforting when one considers that it took the president of this country, a man known first and foremost for the swift and cutting rebuttals he lobs towards anything that even mildly displeases him, three days to specifically condemn the white supremacists responsible for the rally.

Taking this into consideration, it’s not hard to see why these men felt so comfortable wearing the outfit of the “everyman.” And that should worry us all.

From White Hoods To Popped Collars: The Normalization Of The Neo-Nazi