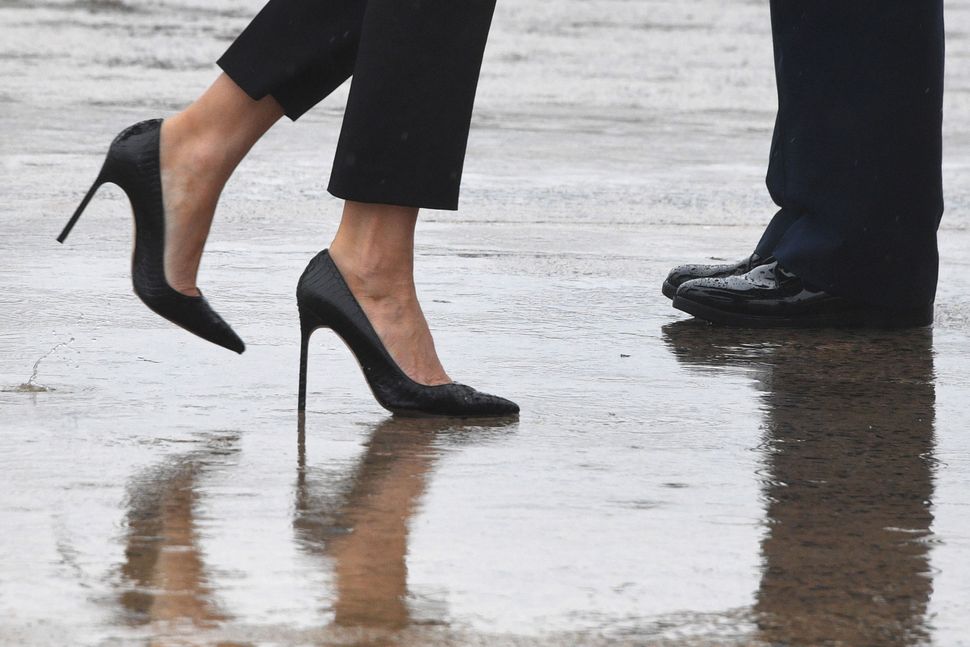 Should the First Lady Of The United States wear stiletto heels on the way to visit the site of a fatal natural disaster? Is it inappropriate to criticize fashion footwear when lives and life-changing policies are on the line? Is it really moral or just to have a government position that demands 24/7 work, necessitates quitting any job you may have, invites constant scrutiny, is totally unpaid, and has always been held by a woman?

These are the questions (except the last one, which I’m just throwing into the ring) that the world is asking after First Lady Melania Trump departed D.C. for Houston wearing a pair of Manolo Blahnik stiletto heels. Melania Trump and her husband crossed the tarmac on Tuesday morning, Trump in her (it must be said) devastatingly gorgeous heels, en route to Texas to witness the devastating effects of Hurricane Harvey. When the Trumps exited Air Force One in Corpus Christi, Melania Trump had changed into (it must be said) exquisite ivory-colored sneakers, but the damage was done. Denizens of the internet and media exploded with responses, and responses to the responses, like a venomous, digital Wimbledon.

What groups love to be at the intersection of self-righteousness, shoes, Tweeting, and comedy?

Chelsea Handler got in on the action first, with a tweet with a carefully placed ellipses for maximum judgment in fewest words.

Melania taking off for Houston on AF1…in stilettos.

Zach Braff crushed a thousand dreams that he might be planning his Purim costume in August.

Melania headed to a disaster zone in stilettos is my Halloween costume. pic.twitter.com/BWhUSKWVQ8

Kathy Griffin, who knows a thing or two about criticizing the first family, chimed in.

There are many reasons the Trump administration concerns me…Melania Trump’s shoes aren’t one of them. Not today kids.

Later, Chelsea theorized that the First Lady’s plans to wear stilettos to the flood was foiled.

Um…she put the shoes on after all the comments on twitter en route to Houston. Prob spun them out of potus’ wig. https://t.co/g3cY7TCgvz

But Trevor Noah had the absolute last word. In a segment earlier this week, Daily Show host Trevor Noah made it clear that if the shoe fits, other people’s opinions don’t matter.

“Here’s my thing,” said Noah. “I don’t know why anyone should care what anyone wears when they’re on their way to help people.”

Noah added that people do not criticize the Pope’s outfits, “And he looks like he’s going to a P. Diddy party, but we don’t say, ‘Hey he can’t go out helping people dressed like that!’”

Noah responded to critics who say Trump should have shown sensitivity by not dressing with fashion in mind on the way to a disaster zone. “In Melania’s defense, she lives in a permanent disaster zone and that’s what she always wears,” Trevor said.