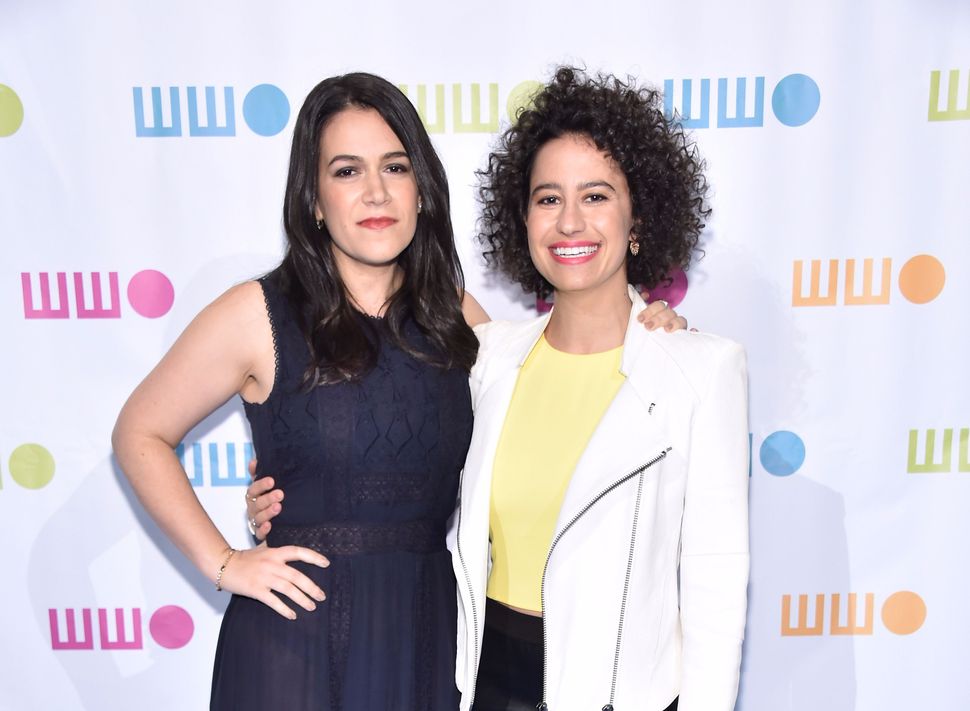 The season 4 premiere of “Broad City” dropped last week on Comedy Central. Now, the “Broad City” creators must reckon with the feedback of their most-feared reviewers: the Schmooze ladies.

Where does this premiere fall on the spectrum of “Broad City” premieres?

Jenny: This felt like a “love-letter to the fans” if you will (and I don’t blame you if you won’t). The stars said in the “Behind Broad City” segment that they initially wrote a version of this episode for the first season, but that producer Amy Poehler suggested they save it until they built up a bigger fanbase. I felt taken care of as a fan, and I also think that the amateur writing and acting showed through. For me, “Two Chains,” last season’s opener, was truly magnificent comedy. This was a very sweet start, though.

Becky: It makes a lot of sense that this episode was written over four years ago because, I agree — it felt different (and more amateur) than their previous openers. It was kind of jarring for me, personally, to explore Ilana’s inner life. I found myself asking for the first time last night whether or not Ilana has a marijuana addiction and, honestly, I’m not here to consider the weight of addiction. I’m here to have fun! And watch two white girls rampage Brooklyn without any consequences.

Becky: Abbi has always been the straight (wo)man to Ilana’s absurdity and I’m afraid that developing Ilana emotionally as a character will make this season less funny. Ilana isn’t a real person. She’s a (hilarious, phenomenal) caricature of a character. What’s next? Are we going to sit by while the writers of “South Park” further develop Cartman’s inner complexity?

Jenny: I am so excited to be here to tell you how wrong you are. Guess what, Becky! Women can be funny and emotionally complicated! Now you don’t ever need to worry about this again.

Becky: Wow, Jenny, you are getting very emotional about this, are you on your period?

What was the best part of the episode?

Jenny: Abbi and Ilana’s exchange about what Jews look like, and Abbi telling Ilana that she looks great with her natural hair will be projected onto the walls of Jewish museums and studied in Jewish culture classes for years to come, mark my words.

Becky: That was really funny. My favorite part in this episode and also probably out of every episode of everything I’ve ever seen, including “Breaking Bad,” was when Abbi got that tattoo of Oprah. Also, Abbi refusing to share one her three slices of pizza with Ilana because she’d had a bad day and Ilana totally getting it was a really heartwarming moment.

What was Jewish about this episode?

Jenny: I recently wrote an article about how “Gossip Girl,” which takes place on the upper East Side of Manhattan and focuses on elites, cast almost no Jewish actors or characters. I want to point out that this show, which focuses on middle class, funny, NYU students, isn’t stingy with Jewish actors and characters. The psychic and one of the roommates, and (I think) the homeless man, are played by Jews. And Elizabeth Cappuccino, who I believe is not Jewish, plays the token Jewish NYU betch— “Jessica Merkel-Keller.”

Becky: Yeah, this show is a lot more “grassroots” than “Gossip Girl,” which was conceived in the cold austerity of a Hollywood studio lot (probably). This show started as a YouTube series that Amy Poehler happened to come across and love so it makes sense that they would cast people who a) look like their friends and b) are their friends and c) aren’t Blake Lively.

Jenny: Three types of NYU roommates were represented — the moneyed WASP, the fashion asshole, and the Jewish American Princess. Only the last one was intended to be Jewish, and that stereotype felt pretty reasonable given the writers’ experiences and the other people they were targeting. Their hatred of Ilana’s hair, I thought, was a perfect cocktail of microaggressions by 2 non-Jews and internalized anti-semitism by a Jew. Love that.

Becky: As a non-Jew who is constantly being mistaken for a Jew both physically and emotionally, I was unable to relate to the joke about how Abbi does not look Jewish. She looks perfectly Jewish to me.

Jenny: I think she looks Jewish, but Ilana has so deeply internalized that looking Jewish is equal to looking ugly, that she can’t recognize that Abbi is a person who both looks Jewish and looks hot. Bless “Broad City” for making these conversations work as jokes.

Becky: I agree with all of this. Also, re: Abbi’s appearance, I was a little bit sad that she lost weight for this season. To be clear, in no way do I blame her — I would probably lose weight if Comedy Central paid five nutritionists to follow me around, which is how I assume all celebrities lose weight — but there’s something that feels defeating to me every time a woman who ascends to the top of the celeb food chain immediately drops fifteen pounds.

Jenny: I also have elaborate fantasies about how famous people diet!

Was this episode funny? Does it bode well for the future of Season Four of “Broad City”?

Jenny: Watching “Broad City” makes me feel closer to God. This episode won’t go into any top ten lists, but it’s still all part of the divine project in my book.

Becky: At the end of the day, we hold Abbi Jacobson and Ilana Glazer to impossibly high standards. I remember attending the premiere of “Girls” roughly seven years ago and being totally blown away by the fact that a woman who wasn’t a model or a miniature version of a model (see: Sarah Jessica Parker, Brittany Murphy) had created a funny show without making it about how she’s thirteen pounds overweight. The fact that I sit here now critiquing “Broad City” for making a joke about a homeless person throws into high relief just how far lady-made comedies have come since “Girls.” What I’m trying to say is: “Broad City” also makes me feel closer to God and I’m going to miss it so much when it’s gone.