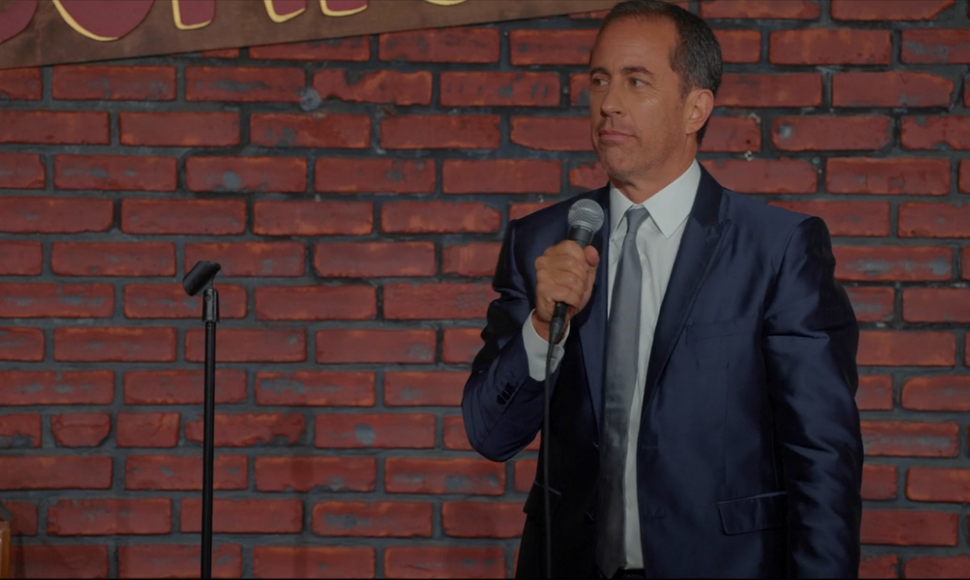 For Jerry Seinfeld’s new Netflix special, “Jerry Before Seinfeld,” Seinfeld performs at The Comic Strip, the Manhattan comedy club where he got his start 40 years ago. Throughout the special, Seinfeld delivers a vintage performance. Whether discussing how Cookie Crisp cereal sadly revealed the farce of sugary breakfast foods (“It’s not like cookies. It is cookies”), or just observations on being a grown-up (“Adulthood is the ability to be totally bored and remain standing“), Jerry’s zingers on the absurdities of daily life are as amusing as they were 40 years ago.

But who was he 40 years ago? “Jerry Before Seinfeld” attempts to answer this question by interspersing his stand up routine with interviews and footage depicting his exceedingly normal childhood in New York, as he framed it, and his early years in comedy. Seinfeld transports you back to a “little Jerry,” offering the same lamentations we saw years later on TV: ‘that’s a shame.’ But that’s all we get about his personal history — his shtick. There’s nothing deeper, no grander message, Jerry insists — he’s just a funny guy.

Though it fails to reveal much about Seinfeld’s story or persona, these formative experiences do tell a lot about the comedian Seinfeld became — in particular, why his humor was once so revolutionary, and why it today may feel out of place.

“Being obsessed with comedy felt really liberating because it didn’t have to do with the real world,” he says of his childhood. “A Mad Magazine, you start reading — these people don’t respect anything. This exploded my head!”

Ever since, Seinfeld has played the cheerfully cynical spectator to routine behavior — but stripping humor of all temporal context becomes a statement within itself. As a famous stand up comic during the 80s, when Nancy Reagan told kids to “Just Say No,” and as an award-winning showrunner during the halcyon post-Cold War ‘90s, Seinfeld’s amoral, postmodern comedy dropped a junior mint in the open spleen of the mainstream moralists — a fundamental departure from the Leave It To Beaver sitcom template.

Though his approach hasn’t changed, the context outside the comedy club has. At one point during his routine, Seinfeld pokes fun at men’s obsessions with “building, fixing, doing things,” which draw them in hordes to a new Phillips drill like testosterone-fueled zombies. Seinfeld’s greatest skill is his ability to point out the trivial rituals we all unwittingly partake in and perpetuate. In this case, his aloof viewpoint can easily be a window into grander issues like gender norms and toxic masculinity. Though he identifies the symptoms, however, Seinfeld doesn’t care to ever make a serious diagnosis himself. He’s in it for the laughs — nothing else.

Not that there’s anything wrong with that, inherently. In his recollections, Seinfeld emphasizes comedy as a form of escapism. Surely, there are viewers who want to take an hour-long break from our crazy modern world to discuss elderly retirement in Florida (“My parents didn’t want to go to Florida; they were getting old, that’s the law…”) or how arrogant magicians must be (“I come on, I fool you, you feel stupid, show’s over”). But a brand of humor that once detached itself from an illusory standard of morality is now ignoring a profound immorality that has replaced Nancy Reagan in her stead.

And so, though an offspring of another turbulent time — 1970s New York City — Seinfeld’s escapism now sometimes translates as tone-deaf and privileged. Considering the rather inoffensive nature of his humor, some may have been surprised when he spoke out against “PC culture” on college campuses. But as Seinfeld’s performance shows, it’s not the ability to skewer college students on these issues that he seeks, but the choice to just not care.

However, Seinfeld’s platform ensures that there is no neutral perch to poke fun at everyone else from. But how can his uncompromising apathy navigate those contemporary waters? The one allusion Seinfeld makes to Trump is revealing:

President is a weird job. People say the president might be crazy. Oh yea, so? What do you expect? Anybody who thinks they should be president is out of their mind…. ‘I should be President’ to me is like ‘I should be Thor’… What I do not comprehend is how we got the elephant and the donkey as the two mascot animals for the two major parties. You’ve got the whole animal kingdom here you can pick from! Bengal, stallion, lion, [but] Democrats [say], ‘how about a jackass?’

In a vacuum, this bit is funny, if somewhat recycled. But when referencing a president of such outrageously insufficient mental and emotional fitness for the job, Seinfeld’s comment reduces our terrifying situation into a false moral equivalency. Seinfeld’s amorality 25 years ago revealed the hypocrisy of pervading mores; today, that same humor obscures it.

Seinfeld’s guiding philosophy now comes in direct conflict with our era’s signature social ideas of intersectionality and white privilege. At certain points, he riffs on whether stun guns can be scaled to “taken aback” guns, as well as declaring that “if there were no flowers, Earth would be populated by men and lesbians” because “women are with men to get flowers.” Perhaps most tellingly, Seinfeld says of police custody:

I like when the cops catch somebody, they hit him with the nightstick, get them into the handcuffs, they use the chokehold on them, but when they put him in the backseat, they always put their hand on his head — ‘you don’t want to hit your head on the edge of that door, it stings. Be careful!’

Again, Seinfeld’s observations hint at something much deeper, and he doesn’t spare the gory details of police apprehension, but his indifference renders him a mere bystander. Meanwhile, that ‘inevitably’ crazy President also “jokes” about why the police are so nice to dip suspect’s heads. As endearing as Seinfeld naturally is, the Age of Trump is so saturated in context that attempting to escape it becomes a disservice to those who can’t.

“I can talk to all of you, but I can’t talk to many of you,” Jerry gleefully tells the crowd at a distance. That statement epitomizes the particular humor Jerry Seinfeld has cultivated to its seeming apex — anyone can relate, but not to resonate. The special fails to really answer the question of who was Jerry before Seinfeld, the comedic genius, and I don’t think he really minds. There’s no wizard behind the curtain — Jerry is who he’s always been. For better or for worse, Seinfeld greets the inescapable passage of time the only way he knows how: with a shrug of the shoulder.