Should We Forgive Stephen Colbert For Putting Sean Spicer In The Emmys? 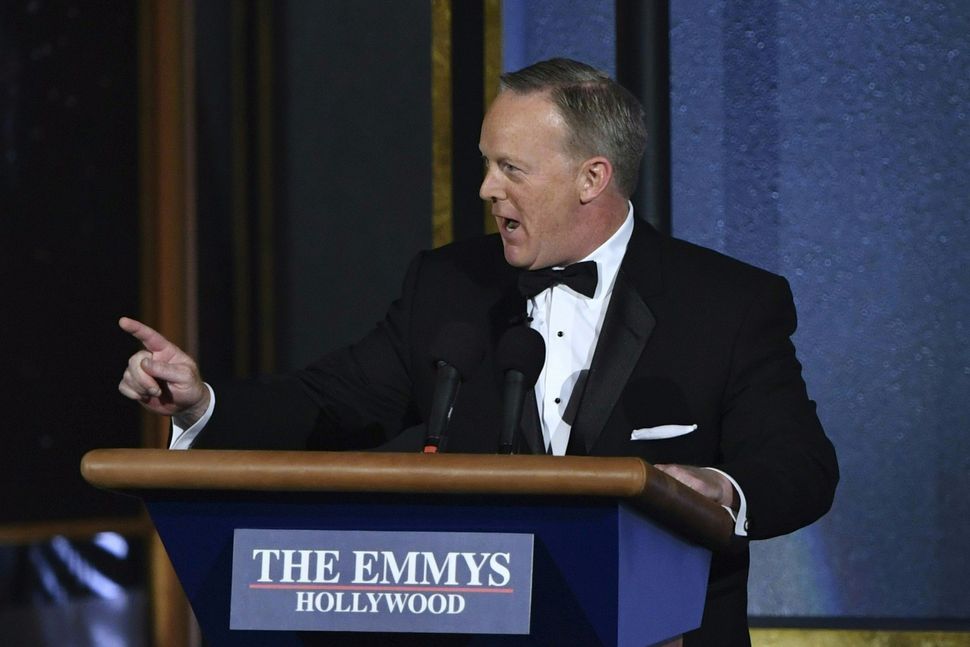 When Sean Spicer appeared at the Emmys, meta-mocking Melissa McCarthy’s SNL portrayal of himself, the whole gimmick was revealed to have been Stephen Colbert’s idea (okay, we know neither of these men are Jewish, but Sean Spicer’s crimes are against the Jews and Stephen Colbert is a well spoken white man with glasses, which means he is practically Jewish).

Shock value in the service of comedy has a long and storied history. When it works, it works well. When it doesn’t, people accuse you of normalizing evil in the same manner as the infamous Jimmy Fallon Donald Trump hair ruffle.

Social media got angry. Zach Braff got angry. That was when the whole country knew it was time to freak out.

I’m not ready to laugh “with” Sean Spicer. I think he is an evil, opportunistic liar that hurt our country.

So do we forgive Colbert, a man with a history of being especially hard on our current president, a man whose cultural hot takes have guided a generation of miserable millenials into seeing the light?

The good should always outweigh the bad, and in Colbert’s case the good (years of solid, satirical political opinion work) outweighs the bad (the time Hollywood metaphorically tousled Sean Spicer’s repulsive comb-over). As difficult as this decision was, considering that Colbert has not released a formal statement acknowledging his brief moral lapse, and considering that Spicer has not retired to the island cave where he shall be destined to live out the rest of his days alone, Colbert’s years of public service have tilted the scale in his favor.

We forgive you, Mr. Colbert. Just never get cutesy with Jared Kushner and we’ll be golden.

Shira Feder is a writer for The Schmooze. You can reach her at [email protected]

Should We Forgive Stephen Colbert For Putting Sean Spicer In The Emmys?