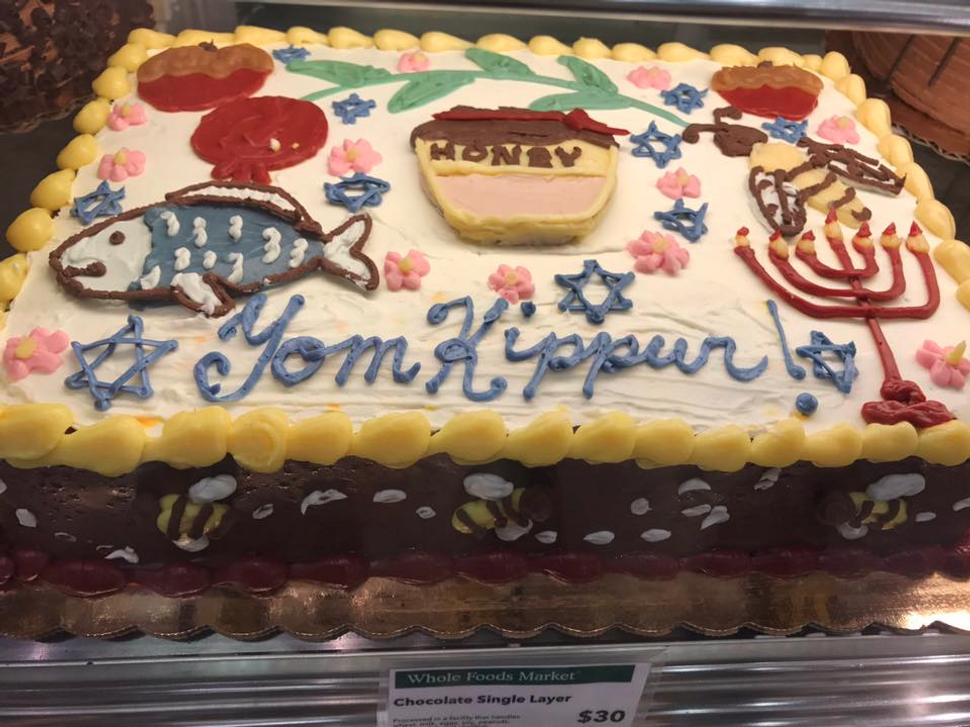 If you don’t see anything wrong with this cake my friend found at a Whole Foods in Rockville, Maryland, I’ll let you in on a secret:

Jewish people observe Yom Kippur by fasting. As in, not eating. So, no cake. Not even if it’s been decorated with every well-known symbol of the Jewish religion including Jewish stars, a honey pot, a bee, pomegranates, an apple, a menorah and, strangely, a fish. My best guess about that one is that it represents gefilte fish, a pescan-like, often gelatinous product designed to divide the religion into two camps: those who declare it delicious and those with the correct opinion.

I’m sure the baker had good intentions, probably trying to help customers celebrate what they knew was an important holiday. But, if I may, a suggestion for the next time to the baker or any other well-intentioned person bent on inclusion – don’t.

Besides, our holidays can’t compete with the Christian ones. And we’re okay with that. Would you rather eat chocolate bunnies for Easter or matzo for Passover? Would you rather hunt for dyed eggs or, uh, more matzo? And let me know when you find someone who would choose lighting candles on a menorah versus lighting an entire tree, strung with keepsake decorations.

If you wouldn’t buy a cake decorated with a cross, Santa, an elf, gingerbread cookies, the Easter bunny, and a lamb or a ham thrown in just for good measure, then you know why I, and likely other customers, find this ridiculous. With one dessert, Whole Foods has managed to be thematically, religiously and seasonally inappropriate.

Stop trying to make Yom Kippur cakes happen, Whole Foods. Cakes aren’t meant to be educational; they’re meant to be delicious. And while I bet this one is, I don’t think we’ll be eating it on Yom Kippur.

Jen Simon has contributed to dozens of publications,including The Washington Post, Cosmopolitan, Slate and Redbook. Don’t let her work about addiction and depression fool you, she’s also pretty funny. Her tweets, statuses and memes have appeared on funniest lists from “The Today Show,” The Huffington Post, Babble and Romper. You can follow her on Facebook at Facebook.com/JenSimonWriter;, on Twitter,@NoSleepInBklyn, and on Instagram, @JenSimonWriter