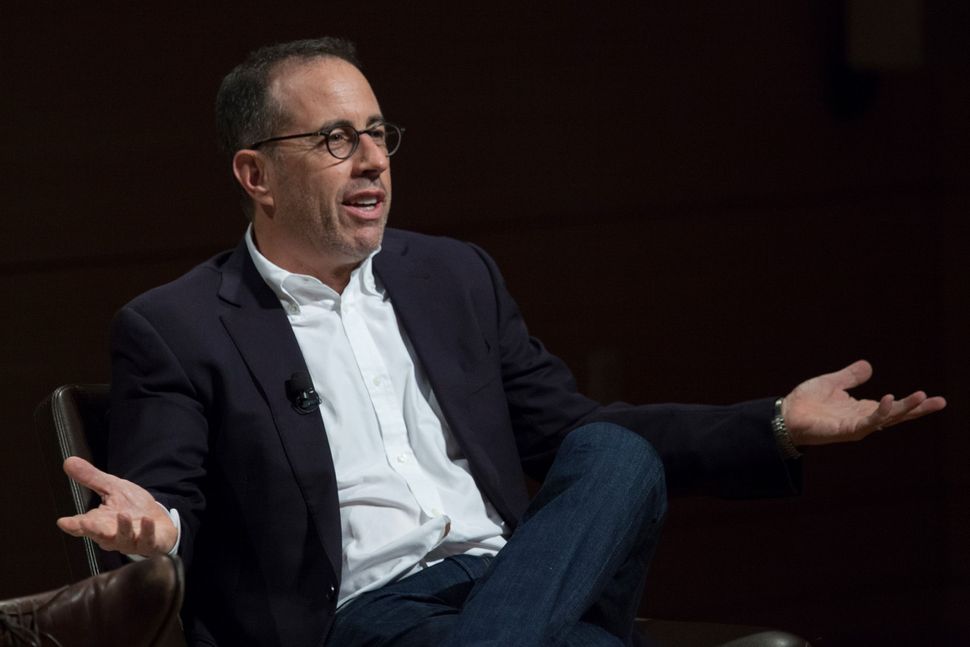 In a somewhat mind-blowing segment on “Late Night with Stephen Colbert,” Jerry Seinfeld publicly reckoned with Bill Cosby’s disturbing fall from grace — and whether it means that the comedian’s past work has been irrevocably compromised.

The conversation started with Stephen Colbert telling Seinfeld that, although he grew up on a steady diet of Bill Cosby standup albums, he can no longer listen to the comedian.

“I can’t separate it,” said Colbert of the disturbing rape allegations that dozens of women have lobbed at Cosby.

“You can’t?” asks Seinfeld, incredulous. “I know it’s tragic, but there’s a lot of tragedy in comedy … There’s a lot of people who have tragic lives. You know.”

It’s unclear whether Jerry Seinfeld was saying Bill Cosby’s life is tragic or the lives of his many victims are tragic – but he attempted to further explain.

“Like the Jerry Lewis thing,” he said. “You read the thing about how he didn’t include his sons in his will, did you see that item?”

“Now, how did you feel about that?” said Seinfeld, apparently under the positively bewildering impression that he had just made an appropriate comparison.

“I found it hilarious,” said Colbert. “But he denied them money. That’s not the same thing as slipping them a roofie.”

“See, that upset me because I adore Jerry Lewis but I’m not gonna not watch ‘The Bell Boy,’” said Seinfeld. “I’m still gonna watch ‘The Nutty Professor.’ We need the comedy.”

At this point, possibly sensing the enraged headlines into which Jerry Seinfeld was writing himself, Colbert gracefully changed the subject to Jerry Lewis’s best films. Immediately following the next commercial break, however, Seinfeld broached the topic once more — and, for a moment, it appeared that the iconic comedian had changed his mind.

“I realized during the commercials … I can’t separate [Bill Cosby’s work from the rape allegations] either,” said Seinfeld. “Now that you’ve said it and I’ve thought about it — and I haven’t listened to any of that stuff — I realized it would bother me.”

He then goes on to question his own discomfort with Cosby, asking whether we “should” separate the work from the artist.

“Should the comedic work stand on its own separate from the criminality?” asked Seinfeld.

“It’s made up. It’s material. C’mon,” said Seinfeld, rolling his eyes in a way that seemed to say “I take back everything I said about changing my mind.”

“I know that but part of him was the charming fatherly figure, too, and all of that is destroyed,” said Colbert to applause from the audience.

“All right. You’re right, I’ll change my mind,” Seinfeld said begrudgingly, like a child whose mother is forcing him to apologize for biting the babysitter.

It’s a dissatisfying surrender but I suppose it’s the best we can expect from the man who refused to hug Kesha.

Watch the entire segment below: