Jill Soloway’s groundbreaking “Transparent” is a masterpiece in an era when being superlative is, oddly, the rule. With television like “Transparent” it is incumbent upon the audience to accept our mantle as participants in high art and ignore fears about venerating work that is in the same artistic genre as the new “Big Bang Theory” prequel. Yet in the nascent field of TV criticism, made exceptionally democratic by the nature of television and access to the internet, it is easy to get carried away.

So it was with me and the color palette of the costumes in a single scene in the fourth season of “Transparent.”

Season four of “Transparent” finds the Pfefferman family wandering endearingly around Israel on a trip that is part Birthright-for-the-aging, and part Jewish Maury Povich. In one salient storyline, which looks to set the stage for the fifth season, Ali Pfefferman (the family’s youngest daughter) predictably insinuates herself in Palestinian activism, despite her profound ignorance on that and most other issues. I have already written that Soloway’s approach to showing the conflict onscreen has been a stark departure from the show’s usual style, with uncomfortable amounts of exposition by Palestinian characters and scenes of a tiny West Bank utopia contrasted with the corporate, patriarchy-drenched ick of Israel. But to hastily sound the alarm on Soloway’s political agenda would be to blind ourselves to everything “Transparent” is — careful, subtle, and boundless in sympathy.

So why are the colors of pink in this one scene in “Transparent” so damn unsubtle? 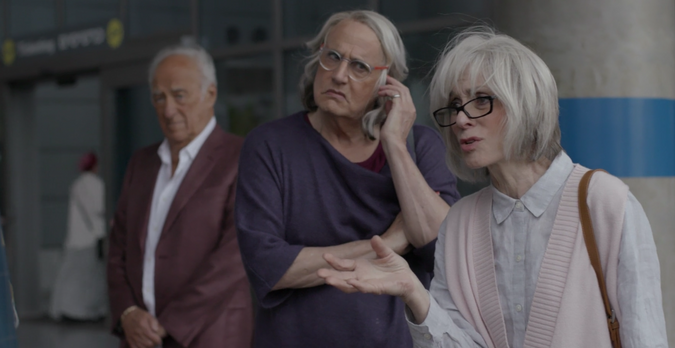 You, hearing my awesome theory but not believing it at first Image by Transparent Amazon Screenshot

In the first scene of the final episode of the fourth season of “Transparent,” every member of the Pfefferman family is wearing a shade of pink. Everyone, except Ali. The family is standing outside the departures level at Ben Gurion, with Ali standing a little apart, explaining her intention to stay in the country. The family looks fabulous. From millennial pink to blue-hued purple, the newly united Pfefferman clan looks obviously unified. They are awash in pink. Which is just how Ali might describe Israel. Pink washing, the practice of advertising a country’s pro-queer policies to distract from other human rights violations, is an accusation frequently leveled at the Jewish state. The episode when Ali first goes to Ramallah and befriends the Palestinian activist collective is called “Pinkwashing Machine.” At the outset of the season’s final episode, every member of the Pfefferman family appear to have gone through that machine.

I called in my colleague Michelle Honig, a fashion critic for the Forward who has a masters degree in fashion history, to help me identify the characters’ costume pieces and the exact shades of pink they wear.

Maura Pfefferman: An eggplant sweater with a wine-colored scoop neck t-shirt peaking out, and pink-accented glasses

Sarah Pfefferman: A micro-geometric print patterned button-down in a range of pink and purple tones

Len Novack: A madras shirt shot through with pink on a blue background, topped with a green hoodie

Moshe Pfefferman: An aubergine suit jacket/blazer with a crisp white button down underneath

All this is very beguiling to the eye and bamboozling to the brain. The most obvious conclusion is that the pink suggest that the family has been ideologically conquered by Israel in their brief stay. But is the fact that the pink is represented on clothing meant to indicate the transience of the family’s Zionism? Pink on clothing seems to intentionally play on the term “pinkwashing,” but also suggests that the family’s allegiance to Israel may be light enough to come out in the wash. Michelle noted that the family’s varying shades and patterns may suggest the depth of their commitment to Israel’s government, pointing out that Maura’s pink-tinged glasses frames allow her to literally see the world through rose-colored glasses. 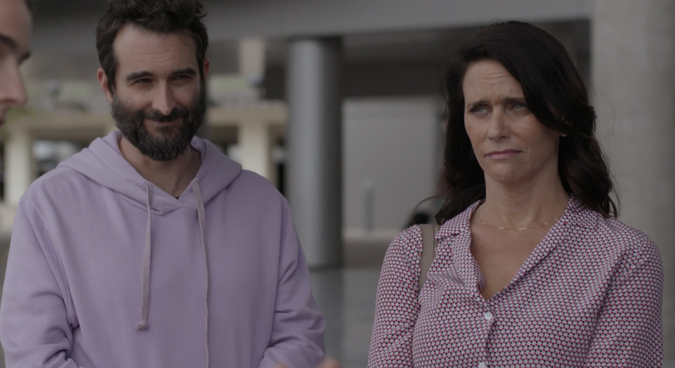 It can be hard to embrace a theory at first, even a really good one Image by Transparent Amazon Screenshot

Ali, of course, is dressed differently from the rest of her family, in the kind of bourgeois student-activist uniform that is so inexplicably annoying/reminiscent of Les Miserables. She is wearing trousers and a navy, large-checked blazer that clashes with her patterned, yellow and blue knit sweater. She is clashing hard with her entire family. 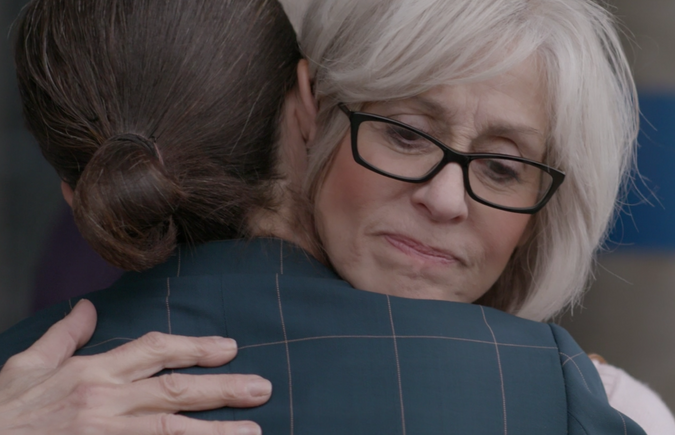 And yet! As Shelley pulls her daughter close for a hug, we see that the checks on Ali’s blazer are faintly, but decidedly, pink! The pale pink could indicate that the spirit of pinkwashing is slowly seeping into Ali’s consciousness, perhaps forming a chain, checking her resistance. Like the literal wordplay on “pinkwashing,” could the pink checks evoke the checkpoints that were a major symbol throughout the season?

As you marvel over this close reading and the single semester of art history that clearly informs it, be sure to hold on to your hat (whatever color it is). Because as Ali’s family turns to leave her, this happens:

Twice, momentarily, the camera shows the vent flap on Ali’s blazer flip up in the wind, exposing a tiny pink ribbon running along its inner seam. At this point, if you think I am making this up, you are beyond my help. Soloway or someone in the costume department at Amazon is trying to send us a very strong message about the color pink. That’s that.

Bryna, Maura’s sister and Ali’s aunt, does not speak in this scene, and she is obscured behind other actors in almost every shot. But as she turns to walk into Ben Gurion, we see she is wearing, like Ali, an outfit of navy, white and yellow. 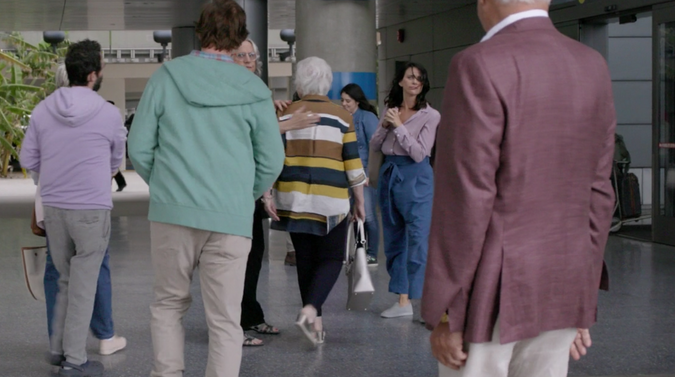 Bryna, I love you, but you’re bringing my theory down. Image by Transparent Amazon Screenshot

Why? Is Bryna the true independent thinker of the family? Does her outfit allude to a future storyline where she will explore her gender identity? Did the costume designers just run out of pink outfits? Your guess is as good as mine.

See you in season five, “Transparent”.