My beloved Sarah Silverman spoke and said unto me, ‘Rise up, my love, my fair one, and come away, this is freaking HAPPENING.’ — Song of Songs 2:10 (Revised by The Schmooze Edition.)

Sarah Silverman is one of the funniest people in the world, and yet she is almost always bad in movies.

You’ve been here before: you’re watching a movie. Sarah Silverman appears, beautiful hair glistening like a wig made from hundreds of American Girl Dolls’ heads. Your heart fills with joy, knowing that a world class comedian is about to speak. She speaks. You despair. Once again, Sarah Silverman has been given a bit-part that reduces her to a caricature and belies her gifts.

Sarah Silverman miserably reigned in as Alexi Darling in the movie musical version of “Rent” — an ironic reminder that even comedy visionaries sometimes have to sell their souls to pay rent.

Sarah Silverman as a waitress in “The Muppet Movie” — it would probably be fine if we didn’t know this was the woman capable of “I F****d Matt Damon.”

We shouldn’t have doubted her.

In “Battle of the Sexes,” the new movie that tells of Billie Jean King and Bobby Riggs’ historic tennis match, Sarah Silverman finally gets what she deserves: a role as smart as she is. Silverman plays Gladys Heldman, the real life co-founder of the women’s tennis circuit that boycotted the US Tennis Association’s unfair pay for women and eventually forced the USTA to raise female pay.

“You’re not supposed to be here,” says Jack Kramer, the real-life tennis tournament promoter who aggressively underpaid female players, when Heldman walks into his social club.

Silverman plays Heldman as a power-broker on a one dollar budget, a feminist obsessed with success, a Jew who constantly worries about the bottom line. Only Silverman could carry this off. Wielding words instead of rackets, her interpretation makes Gladys Heldman as inspiring as Billie Jean King. Somehow, she avoids playing Heldman as just another stock brash female character. Her Heldman is an awesome presence who makes the entire movie function. Miraculously, Silverman plays a proudly Jewish woman who talks constantly about money without raising any concerns about stereotyping or self-hatred. “If you lose, I’ll never forgive you,” she tells King before the match. She is ferocious.

In an absurdly delightful Vulture interview this week, Silverman spoke bitterly about her movie roles. “Hollywood’s supposedly run by Jews, and I think it is, but Jews don’t like to see themselves reflected in art, necessarily,” she told the interviewer, who immediately doubted her. She responded,

Nice try, David. I’ve heard so many executives say Natalie Portman’s the only beautiful Jewish woman in Hollywood. It’s just amazing to me. I feel weird talking about this because it sounds like I’m talking about myself and my own career, but it’s just something I’ve noticed. I’ve seen what’s not available to me no matter my level of success or visibility. They were remaking Superman years ago, and I had all male agents at the time, and I said to them, “My dream is to play Lois Lane.” They looked at me like they were embarrassed for me — I have different agents now.

Near the end of the movie, King’s confidante Ted Tinling, who is aware of her closeted sexuality, tells her, “Times change. You should know — you changed them.”

Sarah Silverman is changing the times too. 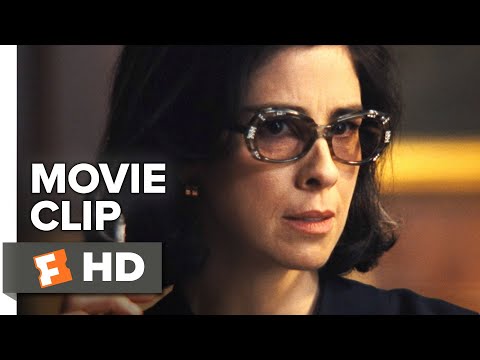