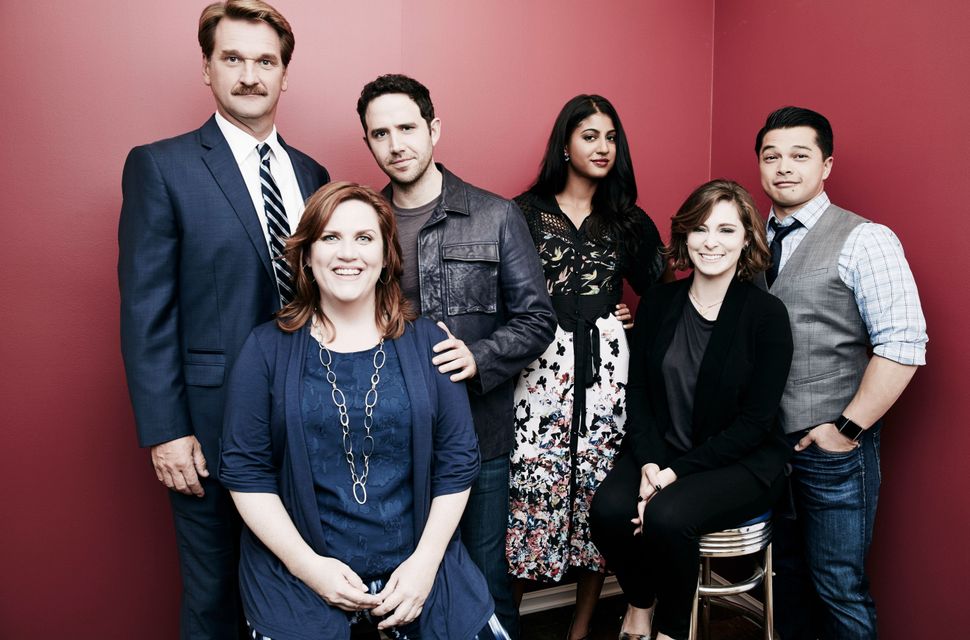 The parade of autumnal Jewish holidays continues: To those celebrating Shemini Atzeret and Simchat Torah, Chag Sameach! While the lure of leaf-peeping, sweater-wearing and Instagramming is tough to resist, make time for great new books, movies and cultural events in New York City, Washington D.C., Chicago and Los Angeles.

CW’s musical comedy series “Crazy Ex-Girlfriend” is a gem. On Friday, the Rachel Bloom-led show returns for its third season; a preview of the first episode suggests more deadpan songwriting and anxiety-inducing shenanigans are on the way. If that’s not enough genius comedy by Jewish women to suit you, Sarah Silverman’s new show “I Love You, America” premieres on Thursday night. Head to the movie theater this weekend for Noah Baumbach’s well-reviewed new film “The Meyerowitz Stories,” or for “Professor Marston and the Wonder Women,” a romp through the kinky history of the creation of Wonder Woman.

Are you a woman who feels mad about Harvey Weinstein? Would you like to shoot lightning out of your fingertips at any man who makes a show at defending him? Naomi Alderman’s “The Power,” newly released in the Unite States, imagines a world in which women can do just that. If you’re in the mood for history, go for Ron Chernow’s new biography of Ulysses S. Grant, Anne Applebaum’s “Red Famine: Stalin’s War on Ukraine,” or Thomas Childers’s “The Third Reich: A History of Nazi Germany.” If you’ve yet to read the allegations against Harvey Weinstein, make time for Ronan Farrow’s investigation in The New Yorker and Jodi Kantor and Megan Twohey’s account in The New York Times. Both are painful reads, but also essential. Painful as well, for much different reasons, is Michael Paulson’s eulogy for the late Broadway composer Michael Friedman in The Times.

Two limited-run dance performances top our list of recommendations for this weekend: Roy Assaf Dance’s “Six Years Later” and “The Hill” at the Baryshnikov Arts Center and Yossi Berg and Oded Graf’s “Come Jump With Me” at New York Live Arts. If you can find a ticket, Amy Herzog’s play “Mary Jane” at New York Theatre Workshop is worth seeing; read the Forward’s Q&A with director Anne Kauffman before attending.

Friday night, snag a ticket to see Whoopi Goldberg’s one-night-only standup routine at the Kennedy Center. Saturday afternoon see Dziga Vertov’s “Man With a Movie Camera” at the National Gallery of Art, where the film is screening as part of a series on Soviet-era film. Sunday afternoon, head to the Old Firehouse for cellist Mark Haimovitz’s “A Moveable Feast,” which pairs six Bach suites with new works commissioned to partner them from composers including Philip Glass.

Lisa Kron and Jeanine Tesori’s “Fun Home” is in town at Victory Gardens Theater; don’t miss the Tony Award-winning musical. Another safe theatrical bet is Arthur Miller’s “The Crucible” at Steppenwolf Theatre Company. And if you’ve yet to see Michael Rakowitz’s “Backstroke of the West” at the Museum of Contemporary Art Chicago, it’s well worth a visit.